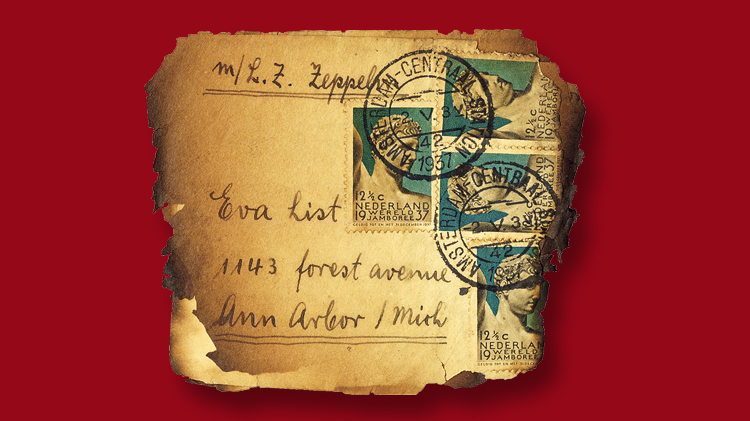 The envelope from the Netherlands carried on the doomed airship in 1937 was franked with stamps celebrating scouting.

An artifact of the devastating 1937 Hindenburg airship tragedy will be offered during the upcoming Cherrystone auction in New York City.

The July 17-18 sale features stamps and postal history of the world, including United States, Great Britain and British Commonwealth, Russia, Europe and more, along with numerous large lots and collections.

Along with its importance as a survivor of the 1937 Hindenburg crash, the partially burned cover in this auction is franked with multiple 12½¢ Mercury stamps from the 1937 Netherlands set commemorating the planned Fifth Boy Scout World Jamboree (Scott 208), making it a desirable item for any specialized topical collection of Scouts on stamps material.

The stamps franking the charred cover are tied with two strikes from the Amsterdam Central Station postmark.

The cover is addressed to Ann Arbor, Mich., and includes a notarized affidavit from the addressee, as well as a Philatelic Foundation certificate.

The collection write-up with which the cover is pictured in the catalog explains that eight mailbags were carried aboard the airship, and more than 160 letters and cards have been salvaged from the disaster.

Cherrystone notes that the auction includes a number of lots from a Scouts on stamps collection of the world.

The auction catalog is available online, with online bidding available.