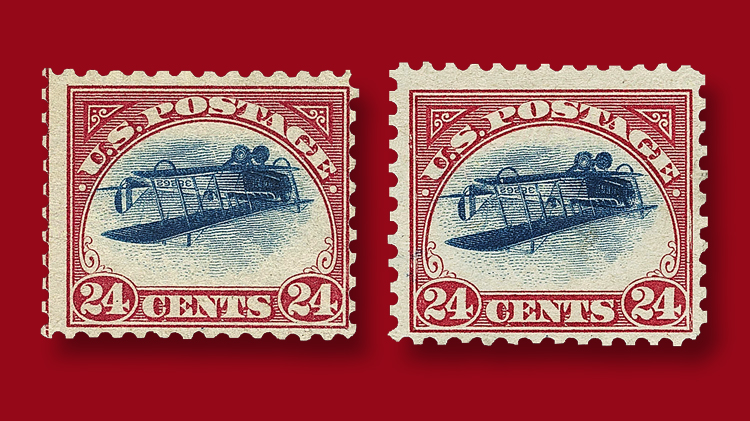 Two examples of the 1918 24¢ Jenny Invert airmail error stamp, from positions 6 and 15 on the discovery sheet of 100, will be offered in the June 27 auction by Robert A. Siegel in New York City. 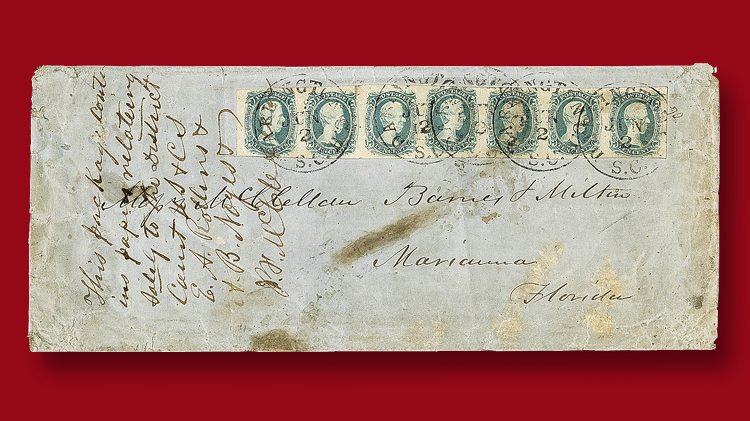 Siegel’s June 28 auction of the Kilbourne collection of Confederate stamps and postal history will include this cover franked with the largest used multiple of the 10¢ blue “TEN” stamp.
Previous
Next

The upcoming Rarities of the World public auction from Robert A. Siegel Auction Galleries includes two Jenny Inverts that will be sold individually.

The June 27 sale at the Siegel galleries in New York City will be followed the next day by the first of two planned sales offering material from the Kilbourne collection of Confederate States stamps and postal history.

The Wednesday sale is not the first to offer two examples of the famous 1918 24¢ Jenny Invert airmail error stamp. In fact, the two stamps that are about to be auctioned, from positions 6 and 15 on the lone discovery sheet of 100 invert errors, were both previously offered in a 2010 H.R. Harmer auction.

Siegel revealed that the stamps are both from the collection of the late Kenneth E. Daugherty.

The position 6 stamp originally had a straight edge along the top, but it was reperforated at some point between the 1942 Col. Green auction and the 1951 Sylvester Colby auction, according to Siegel.

The auction firm also noted that the stamp has “tiny thinning at bottom” and a “light gum crease not mentioned on accompanying certificates,” which are Philatelic Foundation certificates dated 1979, 1995 and 2010.

Because of its position on the pane, the stamp shows evidence of the red guideline along the left edge.

The position 15 stamp bears faint traces of purple ink just above the bottom left “24” denomination on the front of the stamp, ink that it didn’t have when it was offered in 1997, Siegel said. A tiny thin spot is noted, and this stamp is also accompanied by a 2010 Foundation certificate.

The position 15 stamp “was once part of the Louise Hoffman air post collection and the Dr. Drew Meilstrup collection sold by the Siegel firm in 1973.”

Both stamps have original gum and rich colors, according to the auction descriptions. The Scott catalog value of $450,000 is noted in the Siegel listings.

The auction catalog provides a lengthy background history for this iconic American stamp error, and additional information about the individual stamps is available on Siegel’s InvertedJenny.com website.

Along with more than 100 classic and modern U.S. issues, the auction includes stamps from Canada, Newfoundland, China, Israel and the Virgin Islands.

A significant classic offering from Canada is a used example of the 1851 12-penny black Queen Victoria on laid paper (Scott 3). The stamp has “large to full margins all around, strong shade and sharp impression, light target cancel,” according to the Siegel description.

The stamp is valued at $135,000 used in the 2019 Scott Standard Postage Stamp Catalogue, with the value in italics, denoting an item that can be difficult to value accurately.

The Kilbourne collection consists of classic material accumulated by Charles and Lucy Kilbourne in a collection that began more than 75 years ago, Siegel president Scott R. Trepel wrote in his introduction to the auction catalog.

“These sales will bring to market some of the greatest items of Confederate States and Civil War philately,” Trepel said.

Among these are the Confederate patriotic covers designed to “arouse public support for secession, the new government and the war.”

The collection includes two of the 12 known examples of the Hanging Lincoln envelope, including one example that is also one of just two franked with the lithographed 10¢ rose Thomas Jefferson general issue (Confederate States Scott 5).

The horizontal stamp strip is described as having large margins all around, and tied by five strikes of the “Darlington C.H. S.C. Jun.2” circular datestamp (circa 1863).

The large blue courthouse cover is addressed to Marianna, Fla. Offered at public auction for only the second time, it is presented with a presale estimate of $30,000 to $40,000.

Along with the many different elements of Confederate postal history, the Kilbourne collection offers Confederate stamps in singles, blocks, larger multiples and full panes for some issues.

The lots from both of these auctions can be viewed on the Siegel website, and the auction catalogs can be downloaded as PDF documents.