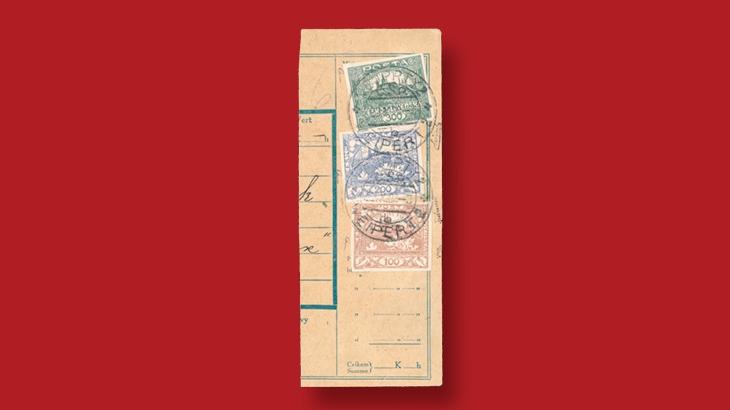 A fragment of a Czech parcel dispatch note franked with all three of the 1920 Vejprty forgeries was auctioned by Burda Auction. 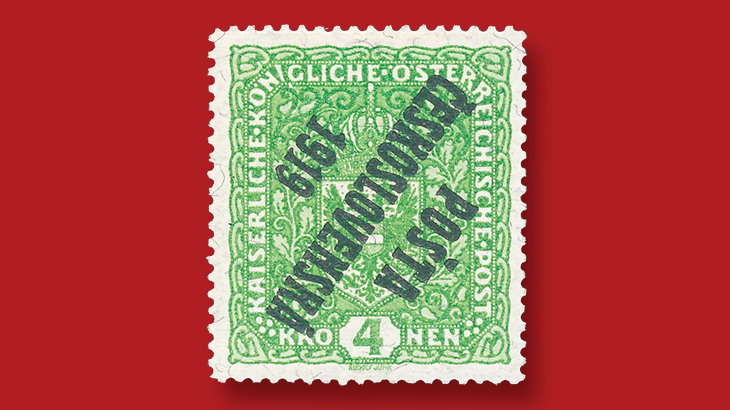 The rarest stamp in Czech philately, the 1919 4-koruna light green Austrian Coat of Arms stamp on granite paper with inverted black overprint, has been described as the only example known. It realized a record-breaking $448,600 in the March 9-11 Burda Auc
Previous
Next

Auctioned for the first time in 90 years, the unique 4-koruna Austria Coat of Arms on granite paper with inverted black “POSTA CESKOSLOVENSKA 1919” overprint (Pofis catalog 50b, Pp II), often described as the rarest stamp in Czech philately, realized a record-breaking $448,600, including a 19 percent buyer’s premium, in the March 9-11 auction by Burda Auction of Prague.

The rare stamp had been held in the postal museum in Prague for decades until it was sold in the 1990s to the prominent Czech collector and exhibitor Ludvik Pytlicek.

Other spectacular material offered by Burda included a gutter marginal block of six of the Czechoslovakia 1933 1k Church at Nitra issue (Scott 193). The block is the largest known gutter multiple and one of only 20 known. It realized the equivalent of $94,900

Forgeries normally sell at small fractions of genuine stamps, but when a scarce postal forgery by a prominent forger appears used on piece, the reverse can be true.

Besides its selection of Czech issues, Burda Auction also offered worldwide lots. From Kenya and Uganda, an unused £50 brown and black King George V stamp (Scott 41D) found a new home for the equivalent of $57,513.