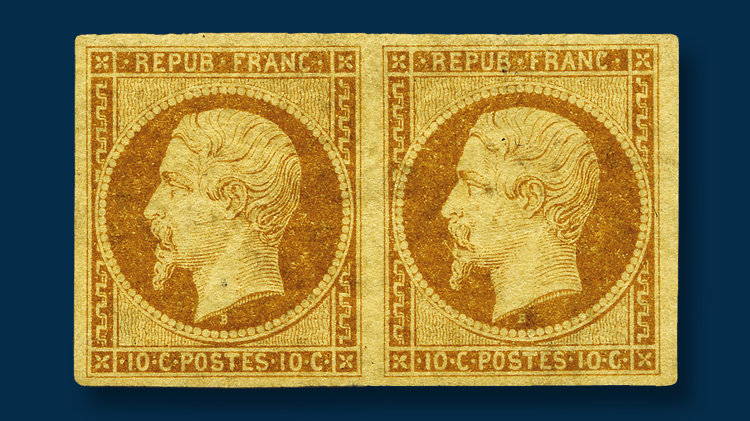 The only known unused pair of France’s 1852 10-centime President Louis Napoleon stamp with original gum will be offered during the March 21-22 David Feldman auction in Geneva, Switzerland.

The David Feldman auction firm in Switzerland has scheduled two auctions of classic material and collections for March 21 and 22. First up is a selection of classic France and colonies with a superb representation of stamps and postal history, followed by specialized Switzerland.

The France offerings begin with stamps of the 1849-50 Ceres series, including scarce unused examples of the 15-centime green (Scott 2).

The first lot listed for the 1852 President Louis Napoleon issue is a spectacular unused pair of the 10c pale bister on yellowish (Scott 10) with original gum. The 2014 expertizing certificate from Jean-Francois Brun certifies the pair as authentic and identifies it as the only known unused pair of this stamp.

This important French philatelic rarity is listed by Feldman with a preauction estimate of €130,000 (close to $160,000 in early March).

There are many postal history treasures in this sale, including some 78 lots offering ballons montes covers and other material from the 1870-71 Franco-Prussian war.

An 1872 letter from Paris to Vera Cruz, Mexico, sports a dynamic three-color franking consisting of the perforated 5c yellow green Emperor Napoleon, the 80c rose Emperor with Laurel Wreath and the 15c bister Ceres, issues of three different series, set on a pale blue letter and tied with a star cancel “24.”  The cover, with multiple additional postal markings, including a Paris double-ring cancel, carries an estimate of €1,000 ($1,230).

The Switzerland specialized auction opens Thursday morning with stampless covers, including a 1696 letter from Geneva to France, and a 1698 letter from Vevey to France.

Several examples of the 1845 2½-rappen Basel Dove (Switzerland Scott 3L1) are offered in this sale, with four used singles and three on cover. One example on a partial cover (consisting of the front and one back flap) boasts sharp embossing, according to Feldman, with sheet margin at top and four wide margins, tied by a red Basel circular datestamp. One of only two marginal examples of the Basel Dove are known on cover; this one has been expertized by Enzo Diena (1990) and Jean-Claude Marchand (2018). It is offered with an estimate of 30,000 Swiss francs (approximately $32,100).

The auction also includes more than a dozen Swiss covers mailed to the United States between 1863 and 1881.