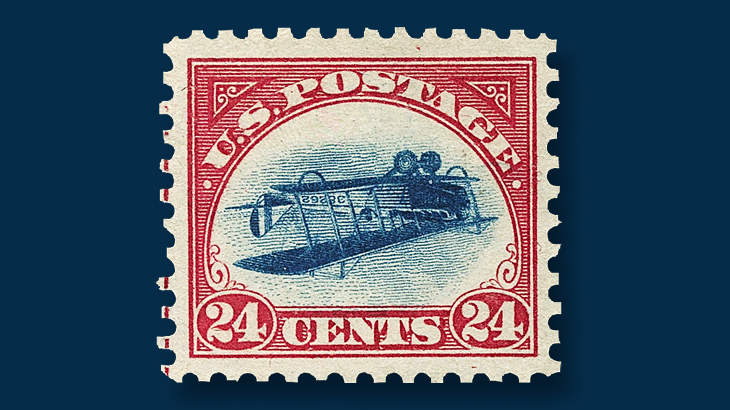 The April 11-12 Robert A. Siegel auction of the David Wingate collection will offer the position 86 Jenny Invert error stamp, which features “unusually choice centering,” according to Siegel. 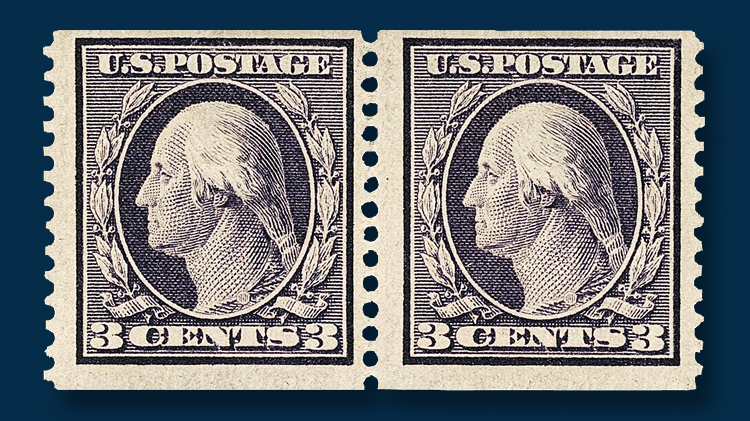 The upcoming Siegel sale includes a rare unused lightly hinged pair of the 1911 3¢ Orangeburg coil. Only six unused pairs and three unused singles of this issue are available to collectors. 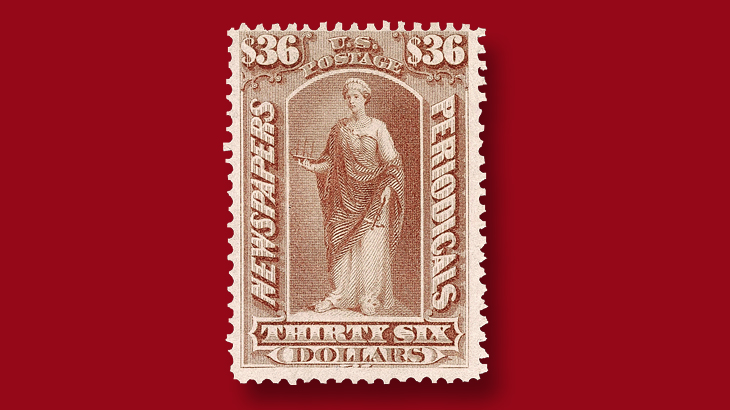 The only known example of the 1875 $36 brown rose Commerce newspaper stamp from the special printing will be offered in the Siegel sale. 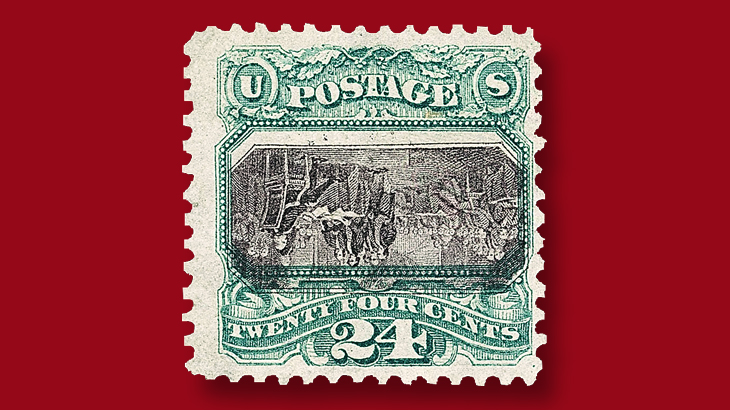 Only four examples of the unused 1869 24¢ Declaration of Independence stamp with inverted center are known: One will be offered during the April 11-12 Siegel auction in New York City.
Previous
Next

When the position 86 Jenny Invert stamp was last auctioned 19 years ago, it was described by Scott R. Trepel, the president of Robert A. Siegel Auction Galleries, as “one of the best-centered 24¢ Inverted ‘Jenny’ stamps in existence.”

Carefully preserved over the years, that same stamp is now being readied for auction as part of the David Wingate collection of United States stamps.

The Siegel firm will again present the invert error at auction, along with some 471 additional U.S. stamp lots that comprise many of the country’s top stamp rarities.

The two-day sale will take place April 11-12 at the Siegel galleries in New York City.

The stamps offered in this auction are from the collection of David Wingate (1921-2011), a collection that is “extraordinary for its completeness, quality and depth,” according to Trepel.

“Many of the greatest rarities and outstanding multiples in United States philately will be found in the Wingate collection.”

The first lot in this auction, in fact, presents a remarkable example of the 1846 5¢ black on buff Brattleboro, Vt., postmaster’s provisional stamp with full imprint “Engd. by Thos. Chubbuck, Bratto.” (Scott 5X1).

“[O]nly the example offered here has the complete imprint; three others show portions of the letters,” Siegel notes.

The stamp, with a faint crease and light red pen mark at upper left, is listed by Siegel with the Scott catalog single-stamp value of $7,500. The catalog gives that value in italics to identify an item that can be difficult to value accurately. Every value quoted here has that same characteristic.

The 17 lots of postmasters’ provisionals that open the auction include further examples from Millbury, Mass.; New York, N.Y.; Providence, R.I.; and St. Louis, Mo. (with eight of the famous “St. Louis Bears”).

Another prominent rarity appears soon after in this sale: one of only three unused examples known of the 1851 1¢ blue Benjamin Franklin type I, position 7R1E (Scott 5), the only position for this issue that shows the complete stamp design.

The stamp on offer is without gum and has clear margins at top and left with top sheet margin. It was discovered in 1998.

Remarkably, it is one of two position 7R1E stamps from the Wingate collection, and the second stamp, with large margins, is also being auctioned. Siegel describes this second stamp as having an unused appearance, adding that “We believe it is quite possible that this stamp is unused.”

The listing in the Seigel auction catalog includes information from the certificates that provides additional detail.

A substantial number of important classic multiples are offered in the auction. Among these is the largest recorded multiple of the 1869 15¢ brown and blue Landing of Columbus type II (Scott 119). The block of 20 with left sheet margin is unused and shows part of the dividing guide at lower left. The stamps are “extraordinarily well-centered throughout,” Siegel states.

No more than five known unused blocks of 20 exist, and all are described in the Siegel catalog. The block of 20 offered in this sale is listed with the combined Scott value for four unused blocks of four and two pairs, at $85,000.

The offerings from the 1869 issue also include two more important rarities in the form of unused 24¢ and 30¢ stamps with inverted elements.

The 24¢ green and violet Declaration of Independence stamp with center inverted (Scott 120b) is one of only four unused examples recorded (one of which is in the permanent collection of the British Library).

“The stamp offered here has the best centering of the four,” Siegel reports.

The unused 30¢ ultramarine and carmine Shield, Eagle and Flags stamp with the flags inverted (Scott 121b) is one of seven recorded unused examples. All but one of these (including the one in this sale) have no gum. The Scott value for this stamp without gum is $300,000.

The remarkable depth of the Wingate collection becomes ever more apparent the deeper one goes into the auction.

Another legendary issue is the 1911 3¢ Orangeburg coil (Scott 389), the deep violet George Washington coil that in unused condition easily qualifies as one of the great rarities of the 20th century.

The auction offers both a lightly hinged unused pair and a postally used single with the typical wavy line cancel.

The unused examples of this stamp are limited to just six pairs and two singles, along with one pair in the Benjamin K. Miller collection that belongs to the New York Public Library.

The rarity of the Orangeburg coil is the result of a limited printing made by the Post Office Department for Bell Pharmaceutical Co., which used the stamp to send product samples through the Orangeburg, N.Y., post office.

The unused pair in this auction has a $250,000 Scott catalog value for the grade of fine. Siegel describes the pair as very fine, lightly hinged with tiny sliver on the left stamp, and makes note of the pair’s deep rich color.

The used stamp, valued at $10,000, is also very fine, according to Siegel, which calls it “an outstanding example of the rare Orangeburg coil,” and “seldom found in this sound well-centered condition.”

Numerous other rarities are included in the sale, such as a mint never-hinged example of the $1 error stamp popularly known as the CIA Invert.

The $1 Rush Lamp and Candle Holder stamp was issued in 1979 and remained in use for several years.

Needing office postage, a CIA employee went to the post office one day in 1985 and bought a nearly complete pane of 95 $1 stamps. The error was noticed soon after — the brown design was printed upside down in relation to the colorful flame — and a group of CIA employees bought replacement stamps, swapping them for the valuable inverts, and selling most of the errors to auctioneer Jacques C. Schiff Jr.

The example of the error in the Siegel auction has selvage on the left side and is described as pristine by Siegel. The Scott catalog value of $17,500 is noted in the Siegel lot listing.

The 24¢ Jenny Invert stamp is one of some 50 back-of-the-book items being offered in the Wingate collection auction.

Siegel notes that the error stamp has a natural gum bend “as normally seen in this part of the sheet” that was described on a 1981 Philatelic Foundation as a “minor diagonal crease.” A subsequent 1989 Foundation certificate doesn’t describe the bend (or crease) at all.

Centering varies on the 100 Jenny Invert stamps purchased by William T. Robey in 1918, with certain stamps showing noticeably better centering than others.

Siegel describes this example as having balanced margins, with a vertical guideline visible along the left perforations.

The Scott catalog value for the hinged unused stamp is $450,000.

Among the newspaper stamps offered in the Wingate collection is another world-class rarity: the only recorded example of the 1875 $36 brown rose Commerce special printing (Scott PR54), without gum as issued.

The auction catalog for this sale can be viewed online or downloaded in its entirety as a PDF document. Online bidding options are available.