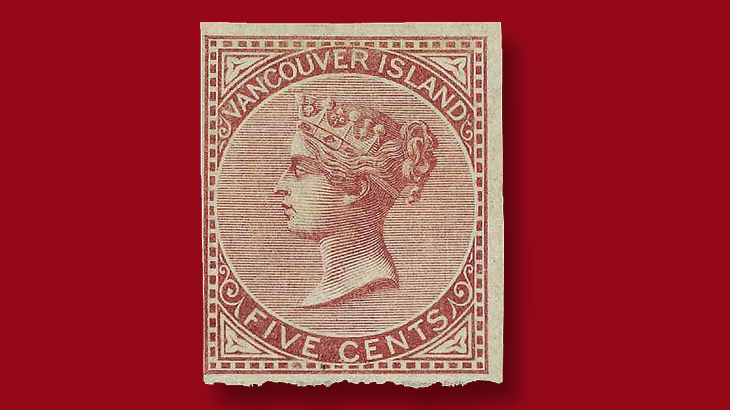 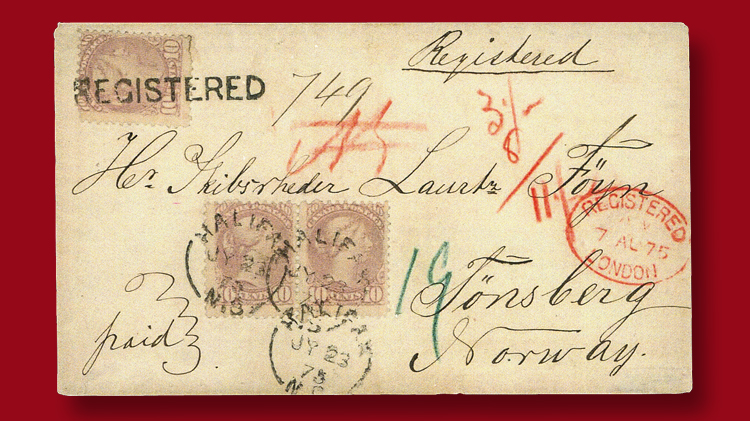 An 1875 registered cover mailed from Nova Scotia to Norway, properly franked with 30¢ in Canada’s Small Queen stamps. The cover will be offered in Eastern’s Nov. 9-10 public auction, which is taking place in Nova Scotia.
Previous
Next

The sales will take place at the Lord Nelson Hotel and Suites, 1515 S. Park St., in Halifax, Nova Scotia, Canada.

A top rarity from this group is a mint example of the 1865 Vancouver Island 5¢ rose imperforate Queen Victoria stamp with Crown CC watermark (Scott 3). Eastern describes it as “one of the rarest mint stamps of the entire British North America,” with margins that are well clear at left to superb, original gum, and very-fine grading.

The stamp was formerly in the collection of British Columbia and Vancouver Island expert Gerald Wellburn and is accompanied by a 2018 Greene Foundation certificate.

The stamp’s value is listed in Canadian dollars at $125,000 (approximately US$96,350 in mid-October). Eastern’s value listing is based on the value for the VF mint stamp plus premium for original gum as found in the 2018 Unitrade Specialized Catalogue of Canadian Stamps.

The imperforate 5¢ rose is certainly not the only rarity in this sale, and its catalog value is even eclipsed by a used example of Canada’s 1851 12-penny black imperforate Queen Victoria stamp on laid paper (Scott 3).

This stamp in Eastern’s sale is struck with a black concentric rings cancel and shows what Eastern describes as ample-to-superb margins resulting in a grade of very fine.

Early in the general worldwide sale, material from the Alan Meech collection of Burma is offered, along with collections of Germany, Berlin and East Germany, stamps of Great Britain and more.

The British North America material in the general sale opens with early colonial postal history of New Brunswick beginning with an 1801 folded letter sheet mailed from Miramichi to Fredericton.

“First nation runners are known to have carried mail for traders and missionaries,” Eastern notes, “this is one of the very few such examples to have survived.”

Another important postal history survivor on offer is an 1875 registered cover mailed from Halifax, Nova Scotia, to Tonsberg, Norway, properly franked at 30¢ with a pair and a single of Canada’s 10¢ Small Queen stamps in the pale milky rose lilac shade, Montreal printings, perf 11½ by 12 (Scott 40c). The fees paid are the 14¢ per half-ounce pre-Universal Postal Union letter rate plus 16¢ for registration to Norway.

The thoroughly documented cover is “widely regarded as the ultimate Small Queen cover,” according to Eastern, and is offered with an estimate of C$25,000 (approximately US$19,250).

Later in the sale, some 20 registered covers mailed with Canada’s 1875 registration stamps (Scott F1-F2) are offered.

A number of Canada’s modern stamp varieties are also offered, including a “Missing Moose,” the dramatic error on the 2003 $5 Moose stamp with all intaglio printing absent. The error creates a Moose stamp with no moose, grass or trees, only background, denomination and other text (Scott 1693a). Eastern is offering an upper left corner margin single.

The auction lots for both of these sales can be viewed at its website, with online bidding options available.