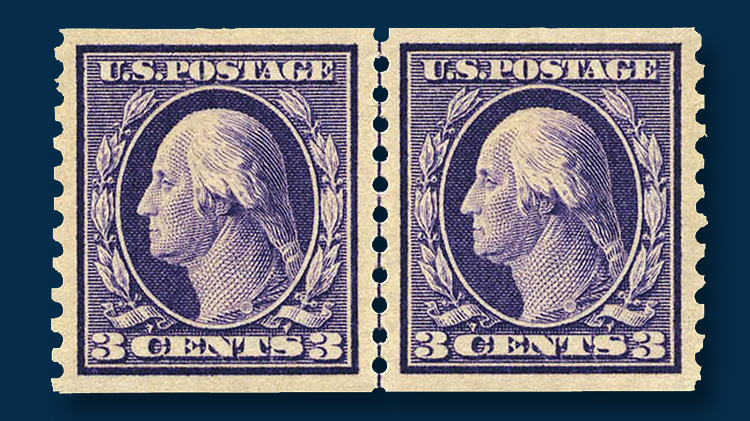 A mint never-hinged guideline pair of the 1914 3¢ horizontal flat plate coil. No examples are known with a higher grade. The pair will be offered Sept. 23-25 during the 2018 Matthew Bennett auction series.

The Sept. 23-25 public auction by Matthew Bennett International will take place at the Mandarin Oriental Hotel, 776 Boylston St., in Boston, Mass., followed by an online-only sale.

The auctions feature United States and worldwide stamps, covers and collections, including a specialized sale Monday of the Golden State collection of gem mint Washington-Franklins.

This material was absent from the Golden State collection of gem U.S. stamps auctioned eight years ago, Bennett explains, because “the collector was actively engaged in perfecting the area.”

The auction offers many of the top-graded examples of mint stamps from this popular and challenging collecting area.

An example of the latter is the 1914 3¢ horizontal flat plate coil (Scott 445), presented as a mint never-hinged guideline pair. While the value for a mint very fine guideline pair is $2,600 in the 2018 Scott Specialized Catalogue of United States Stamps and Covers, the listing of Scott Stamp Values — U.S. Specialized by Grade in the same catalog assigns a value of $14,000 for a mint line pair grading superb 98. Bennett notes that Stamp Market Quarterly assigns a $15,000 value. The coil line pair was certified by Professional Stamp Experts in 2010 and is accompanied by the graded certificate. Only seven guideline pairs have been graded 90 or better, according to Bennett.

Additional stamps from the Washington-Franklin series are included in the general sale.

The 1909 4¢ orange brown Washington on bluish paper (Scott 360) in this auction has been graded XF (extremely fine) 90, described by Bennett as the highest graded 4¢ bluish paper stamp by both the Philatelic Foundation and Professional Stamp Experts.