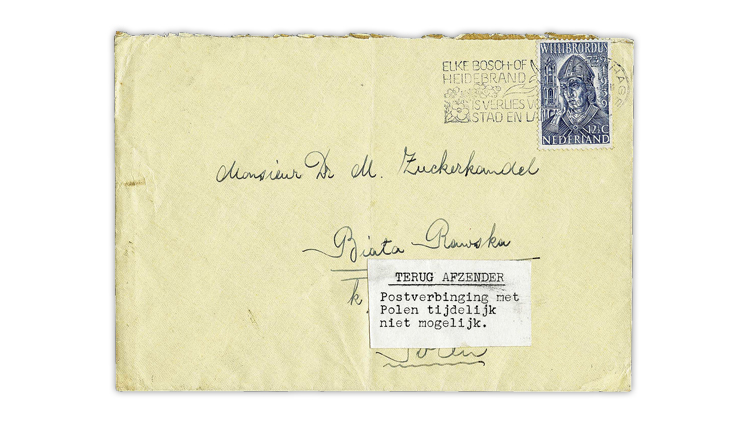 The Kees Adema collection of World War II postal history takes center stage during the April 2-4 Corinphila Veilingen sale in the Netherlands. This cover from the collection was mailed Aug. 31, 1939, from Gravenhage (The Hague), Netherlands, to Mazowiecky 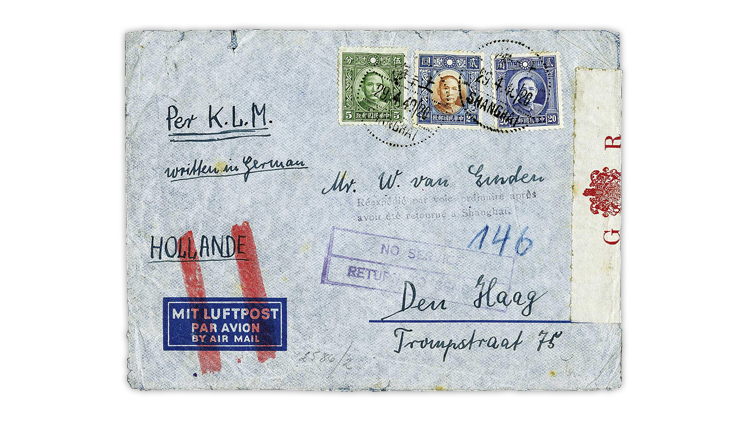 This attractive cover from the Kees Adema collection being offered in the Corinphila Veilingen sale traveled by plane, ship and train during its 1940 journey from Shanghai, China, to Berlin, Germany, where it was censored for a second time and then return
Previous
Next

Due to ongoing concerns regarding the coronavirus COVID-19 outbreak, this Corinphila Veilingen auction has been postponed to June 11-13.

A signature highlight of the three-day sale is the Kees Adema collection of World War II postal history, which will be sold on Saturday, April 4.

In its catalog introduction to the collection, Corinphila describes Adema as “an internationally known postal historian and author who has published five books and some 75 articles and papers about Netherlands philatelic subjects.”

Many of the 144 lots feature covers documenting disruptions and other unusual factors that affected mail transport during the war years. Some lots are comprised of multiple covers still affixed to the original exhibit pages that Adema prepared.

One of the first covers to hit the auction block was mailed Aug. 31, 1939, from Gravenhage (The Hague), Netherlands, to Mazowiecky, Poland, just one day before Germany invaded Poland on Sept. 1, igniting a global war that would span six years.

A stenciled note affixed over the address states that the letter was returned to the sender because postal communication with Poland was “temporarily not possible,” according to Corinphila.

The cover is listed with a minimum opening bid of €150 (approximately $170 in mid-March).

Corinphila notes that the cover transited first through Hong Kong, where it was censored before being routed through Bangkok, Thailand; Naples, Italy; and London, England. The cover then traveled by ship to Lisbon, Portugal, before being loaded on a train for Berlin, Germany.

In Berlin the cover was censored again. A faint boxed “No Service/Return To Sender” handstamp indicates how the cover was handled after leaving Berlin.

Corinphila offers this well-traveled piece of WWII postal history with a minimum bid of €100 ($113).

Details of the entire three-day auction are provided on the Corinphila Veilingen website, including online listings for the material, as well as a PDF catalog that can be individually downloaded. Online bidding options also are available.