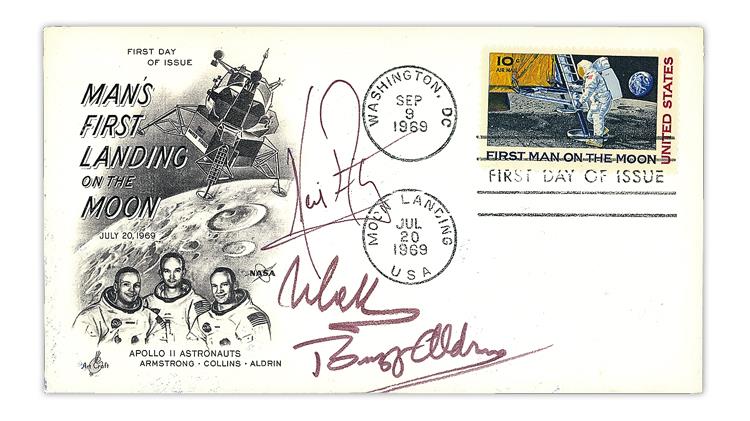 Up for bids during the Daniel F. Kelleher Auctions March 16-17 sale of aerophilately, rocket mail and astrophilately is this handsome ArtCraft cacheted first-day cover for the United States 1969 10¢ First Man on the Moon airmail stamp autographed by the c 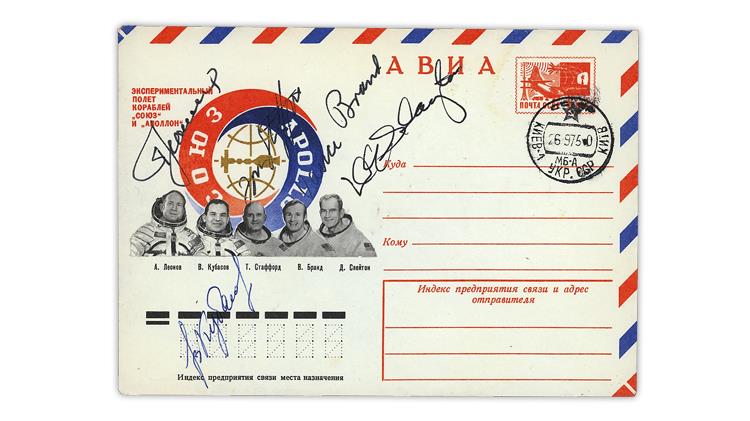 One of the numerous covers celebrating Soviet and Russian Federation space flights and their crews in the Kelleher sale is this Soviet stamped envelope signed in 1975 by the crew of Soyuz 19 as part of a publicity tour for the Apollo-Soyuz Test Project. A
Previous
Next

On March 16-17 Daniel F. Kelleher Auctions will present a sale of aerophilately, rocket mail and astrophilately at the firm’s gallery in Danbury, Conn. Each session will begin at 10 a.m. Eastern Time.

The renowned collections of Johann Strauss and Leo A. Malz are featured in the sale.

In the sale catalog introduction, Kelleher provides some background on the Strauss and Malz collections.

According to Kelleher, Strauss’ “love affair was with postage stamps. His collection of airmail envelopes, many interspersed in massive scrapbooks celebrating aviation, remained intact until offered during this sale. It represents a rare window into famous fliers, transoceanic travel, and the public’s fascination with flight.”

Kelleher said Malz “was proud to refer to himself as the only full-time Space dealer. His holdings of Astrophilately represent a rare opportunity for space event collectors, and dealers intent on continuing Leo’s space topical service, to find wonderful material.”

Aircraft flights, from early airmail flights to rocket mail flights, and U.S. space flights are the focus of the March 16 session.

The 1967-72 Apollo space program is well represented by a number of flight covers autographed by the astronauts who participated in the missions that landed men on the surface of the moon for the first time.

Among the most coveted of these covers are those signed by Apollo 11 astronauts Neil A. Armstrong, Edwin E. “Buzz” Aldrin Jr. and Michael Collins.

An ArtCraft cacheted first-day cover for the United States 1969 10¢ First Man on the Moon airmail stamp (Scott C76) features bold signatures in purple of all three Apollo 11 astronauts immediately to the right of the cachet, with Armstrong’s at the top of the cover, followed by Collins’ signature and then Aldrin’s.

The cover bears Moon Landing and Washington, D.C., postmarks dated July 20, 1969 (the day Armstrong and Aldrin landed on the moon), and Sept. 9, 1969 (the official first day of issue of the 10¢ First Man on the Moon), respectively.

In its description of the cover, Kelleher draws attention to the “bold autographs on an iconic envelope” and points out that “the Master Die for the stamp accompanied the astronauts to the surface of the Moon.”

Covers honoring various Soviet and Russian Federation space flights and their crews, many of which are autographed, are featured in the March 17 session.

One such cover is a Soviet stamped envelope signed in 1975 by the crew of Soyuz 19 as part of a publicity tour for the Apollo-Soyuz Test Project.

In addition to the signatures of cosmonauts A. Leonov and V. Kubasov, the cover is signed by American astronauts Vance Brand, Donald Slayton and Tom Stafford.

“The specialist would be hard pressed to find this tour cover postmarked deep in Russia,” according to Kelleher.

Against an opening bid of $130, Kelleher lists this signed Apollo-Soyuz publicity tour cover with an estimate of $250 to $350.

An assortment of 600-750 space covers from Asia, Japan and Vietnam, described by Kelleher as having “light duplication,” is offered with an opening bid of $150 and an estimate of $300 to $400.

Kelleher has prepared a single catalog for the two-day aerophilately, rocket mail and astrophilately sale that is available for viewing on the Kelleher website, with online bidding options available.