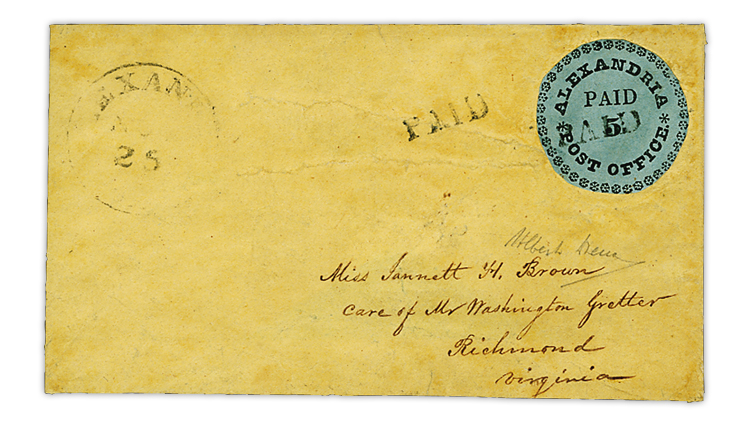 The Alexandria Blue Boy, a famous cover franked with a unique blue Alexandria, Va., postmaster’s provisional stamp and mailed in 1847, sold at public auction in New York City for $1.18 million.

One of America’s most famous philatelic objects was auctioned by H.R. Harmer on June 22 for $1.18 million.

The Alexandria Blue Boy cover, franked with the only known example of the 1846-47 5¢ black on blue type I postmaster’s provisional stamp from Alexandria, Va. (Scott 1X2), was offered at public auction for the first time since 1967.

The auction fielded a single bid for $1 million, meeting the auction firm’s opening price. An 18 percent commission on the hammer price is assessed on all lots sold in the auction.

The Blue Boy cover was offered as the first lot in an auction of 148 items of U.S. and Confederate States material from the extensive collection of German-born business executive Erivan Haub.

David Feldman, the well-known stamp auctioneer based in Switzerland, sold the cover “by tender” for $1 million on May 8 of that year. At the time, the sale price was a record for a stamp.

In the years since, certain famous stamps and covers have sold for multiple millions of dollars. On June 17, 2014, Sotheby’s auctioned the 1856 British Guiana 1¢ Magenta stamp for $9.48 million. The buyer was later revealed to be shoe designer, philanthropist and philatelist Stuart Weitzman.

The Alexandria stamp on the Blue Boy cover was described in the H.R. Harmer auction catalog as having a nice fresh shade, “neatly cut to shape, merely touching the outer design, used on envelope, cancelled by clear straight line ‘Paid,’ with matching second strike at left and ‘Alexandria D.C. Nov. 25 [1847]’ town cancel.”

The cover has been described as “neatly restored,” and H.R. Harmer explained that “it shows some obvious sealed tears and other minor faults that do not detract from this world-class rarity.”