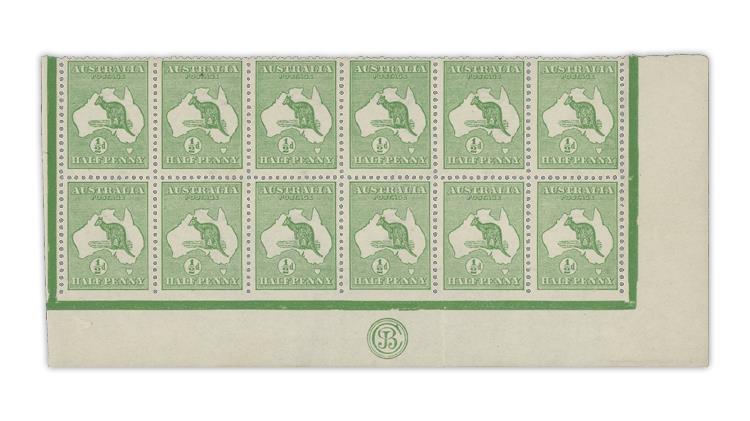 Abacus Auctions’ Dec. 1 sale of the Artemis collection of Australian Kangaroo and Map rarities includes this bottom margin block of 12 of the ½-penny green. The six stamps in the bottom row are imperforate at bottom. 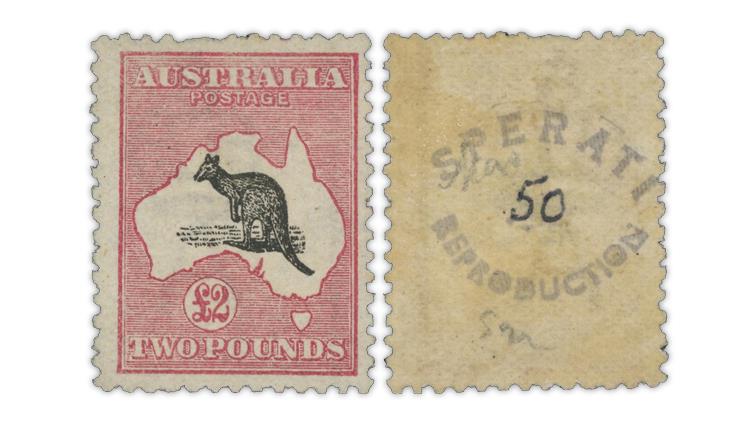 Jean de Sperati created this realistic forgery of Australia’s £2 deep rose and black Kangaroo and Map stamp that will be up for bids during the Abacus sale of the Artemis collection. As shown here, the fake is clearly marked “Sperati Reproduction” on the
Previous
Next

Collectors and specialists of the first regular issue of Australia will have an opportunity to add important items to their holdings when Abacus Auctions conducts its Dec. 1 sale of the Artemis collection of Kangaroo and Map rarities.

The Kangaroo and Map stamps were issued in 1913 and are so named because they picture a kangaroo superimposed over a simplified map of Australia in white.

In its introduction to the Artemis sale catalog, Abacus places this impressive collection in context:

“The late Arthur Gray formed what was unquestionably the most comprehensive collection of Kangaroos, King George V Heads, and so on that has ever been assembled. The late Stuart Hardy’s collection, while not as extensive, comprised perhaps the finest array of such material. That of Ray Chapman now forms part of the Australian National Philatelic Collection and is permanently off the market.

“However, none of them — nor anybody else for that matter — either sought or had the opportunity to assemble the impressive array of spectacular items that comprise the ‘Artemis’ Collection. …

“Offered here are numerous famous pieces. Many of them have never been available for purchase in Australia. Certainly, it is unprecedented for all of them to be brought together in one place, at one time.”

The collection’s owner, writing under the pseudonym “Artemis,” provides a review of his collecting interests and his desire to see a new generation of collectors enjoy the fruits of his labors.

Also included in the catalog is a detailed review of the Kangaroo and Map stamps that discusses their evolution, die proofs and plate proofs, selvage monograms and imprints, and more. This information will make the catalog a useful reference work.

Opening the sale are a number of scarce multiples, including a bottom selvage margin block of 12 of the ½-penny green Kangaroo and Map (Scott 1) printed from plate 2.

The block, which shows a circular “JBC” monogram imprint in the bottom selvage, has added importance because the six stamps in the bottom row are imperforate at bottom.

The monogram stands for John Bradley Cooke, the first stamp printer for the Commonwealth of Australia.

Abacus draws attention to the stamp at position 2R54 (the sixth stamp in the top row), which has an “excess colour flaw” in the lower right corner.

The flaw can be seen to the left of the wide frame line in the bottom right corner of the stamp.

According to Abacus, the ½d green Kangaroo and Map stamps were printed in sheets of 120 that were divided into two panes of 60 consisting of 10 rows of six stamps each.

The block has an impressive provenance, having once graced the Jack Kilfoyle, Morgan and Chartwell collections.

One of the more unusual offerings is a convincing forgery of the £2 deep rose and black Kangaroo and Map (Scott 15) created by Jean de Sperati, who is widely regarded as the world’s most accomplished forger of stamps.

Abacus points out that the unused fake has a couple of pulled perforations at top and appears “a little aged.” Both sides of the stamp are pictured here. A handstamp on the back clearly states “Sperati Reproduction.”

According to Abacus, this fake is the “only Commonwealth of Australia stamp created by the greatest philatelic forger of them all, and one of the great rarities among forgeries of the British Empire, with only two ‘unused’ examples having been recorded.”

Abacus estimates this rare Sperati forgery of the £2 deep rose and black Kangaroo and Map at A$5,000 (approximately $3,715).