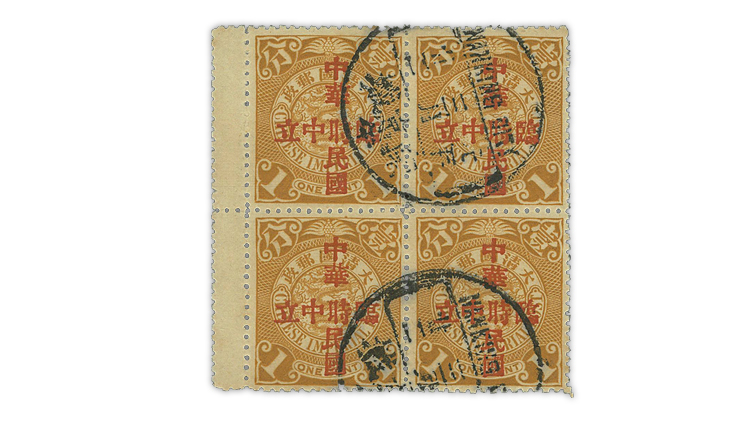 John Bull, the Hong Kong-based philatelic auction firm, will hold a series of four sales Jan. 7-9. All lots in these sales are transacted in Hong Kong dollars.

Among the People’s Republic of China items are numerous sets and collections, many of which offer affordable opportunities for collectors.

One of the larger collections comprises numerous sets from the 1949-66 period that are housed in a single album. John Bull describes this collection as being nearly complete, with some sets missing, and having a “very high market value.”

A page from the album that is illustrated with the lot description shows stamps featuring a colorful array of butterflies, fish and flowers. John Bull lists the intact collection with a starting bid of $15,000 (approximately U.S. $1,935 in mid-December 2020).

On Jan. 8 the first part of the Steven Yen collection of dollar chop cancellations will cross the John Bull auction block. Dollar chops are large double-outline circular datestamps that were applied to mail in various cities in China. These distinctive markings are known on outbound and incoming mail.

The 123 lots feature mostly intact covers (envelopes and postal cards) franked with stamps bearing chop cancels, along with a scattering of stamps on piece and off cover.

A bold strike of what John Bull describes as a Canton “Intercalary Month” dollar chop appears on a neat registered cover sent May 11, 1898, from Canton to Hong Kong. A Hong Kong backstamp (not shown) indicates the cover arrived on May 12.

On Jan. 8-9, John Bull will conduct a general sale of stamps and postal history of Asia and related areas. Countries well represented in the sale include early China (including Imperial Maritime Customs Post issues), Hong Kong, Macao and Taiwan.

A highlight of the China offerings is a used block of four 1¢ ocher Chinese Imperial Post stamps overprinted for use in Nanking (Scott 138).

The China Nanking issue (138-145) was overprinted in red or black; the overprint on this used block is red. Nanking-issue stamps were also used in Shanghai and Hankow.

According to the Scott Classic Specialized Catalogue of Stamps and Cover 1840-1940, the vertical overprint reads “Chung Hwa Min Kuo” (Republic of China).

On Jan. 9 John Bull concludes its three-day series of sales with the Juai Wai Chung collection of postal stationery of the Japanese occupation of Southeast Asia.

A standout item of postal history of the Japanese occupation of Malaya is a local registered cover sent to a bank in Batu Arang in the Malaysian state of Selangor, which John Bull is offering with a minimum bid of $8,500 (U.S. $1,096).