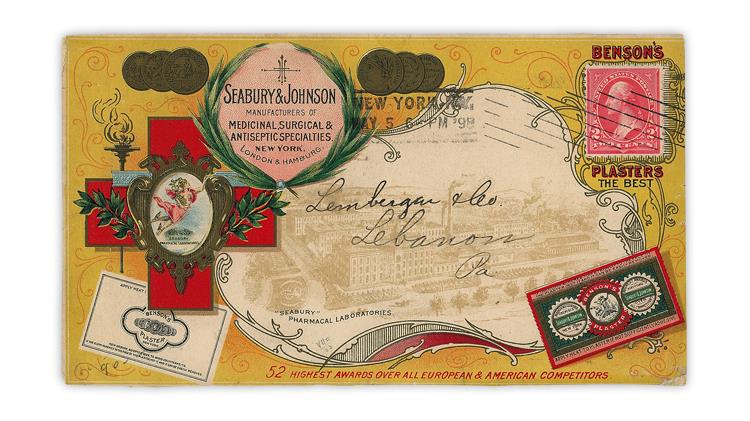 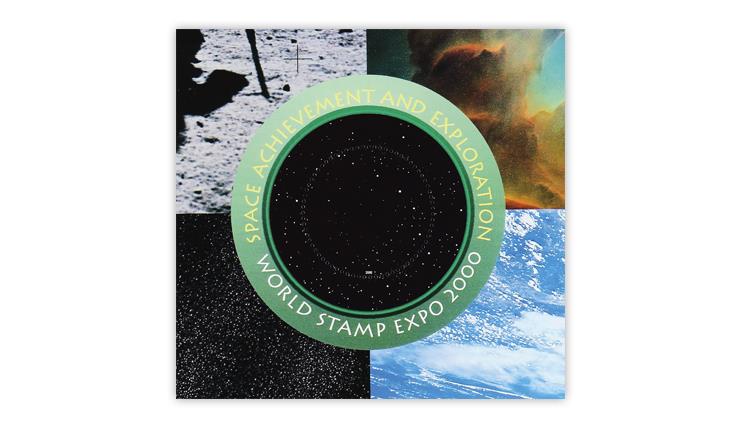 One of the more visually interesting modern U.S. errors in the Feb. 15-17 Kelleher sale is a 2000 Space uncut press sheet of five souvenir sheets with the hologram omitted from the round $11.75 Earth souvenir sheet of one at the center of the press sheet. 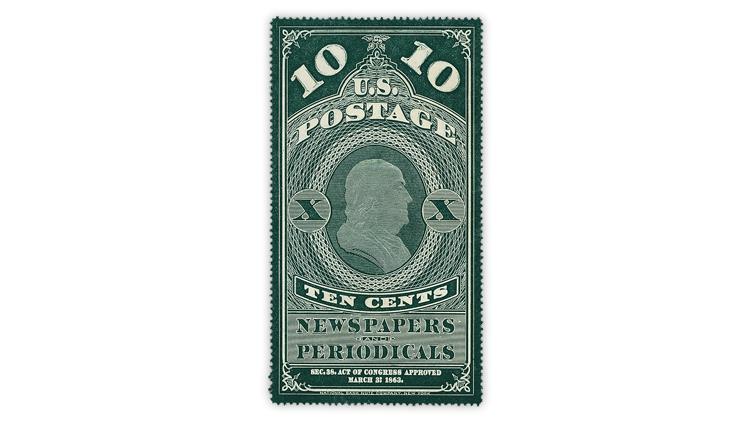 Up for bids during the Kelleher auction is a sound unused 1865 10¢ blue green Benjamin Franklin newspaper stamp with an extra fine-90 graded certificate from Philatelic Stamp Authentication and Grading.
Previous
Next

Daniel F. Kelleher Auctions will present an impressive array of United States stamps, essays, proofs and postal history during a three-day sale to be held Feb. 15-17 at its gallery in Danbury, Conn. Each day of this Flagship Series sale will commence at 11 a.m. Eastern Time.

More than 1,200 lots will be up for bids during the sale. Highlights include further offerings from the stock of the late William S. Langs and the Westway and Langstrom collections of U.S. issues. Material from 27 additional consignors will also be offered.

Stamps from the classic period through modern issues are the focus of the first two days of the sale, along with an extensive selection of modern errors, freaks and oddities. The sale wraps up Feb. 17 with U.S. back-of-the-book issues, possessions, Confederate States and United Nations.

Included in the first session, Feb. 15, is a handsome selection of 74 advertising covers from the late 19th and early 20th centuries. Many companies during this period used decorative stationery to attract the attention of the recipient and others who saw the envelopes during their postal journeys.

One of the more visually appealing in this group is an all-over multicolor ad cover from the medical firm of Seabury & Johnson in New York City.

The cover was mailed May 5, 1898, to Lembergar and Co. in Lebanon, Pa. A crisp New York, N.Y., machine cancel ties the 1895 2¢ carmine George Washington stamp (Scott 267) used to satisfy the required first-class postage.

Decorative elements include floral flourishes, medallions, a stylized red cross, a torch and an allegorical figure in an ornate frame. Visible on the address panel is a scene of the Seabury & Johnson laboratories.

The corner card (return address) is flanked by leaf clusters and states that the firm produces “medicinal, surgical & antiseptic specialties.”

An expertizing certificate from the Philatelic Foundation dated Dec. 21, 2011, states that the 2¢ Washington stamp represents a “genuine usage.” The cover also has “small corner repairs at top left and bottom right,” according to the certificate.

One of the more unusual errors to cross the Kelleher auction block is a 2000 Space uncut press sheet of five souvenir sheets with the hologram omitted from the round $11.75 Earth souvenir sheet of one (Scott 3412c).

Kelleher describes the error as being “fresh and sound” with never-hinged original gum. With the hologram omitted, the error looks like “an irresistible black hole,” according to Kelleher.

A dash is shown in the unused value column for Scott 3412c in the Scott Specialized Catalogue of United States Stamps and Covers because not enough market data is available to establish a value.

Among the 30 lots of U.S. newspaper stamps is an unused (without gum as issued) 1865 10¢ blue green Benjamin Franklin (Scott PR2) that Kelleher describes as “a stellar example with immense color, superior centering, and nary a fault.”

A 2021 Philatelic Stamp Authentication and Grading expertizing certificate assigns a grade of extra fine-90 to the stamp.

PSE has not issued a graded certificate for an unused extra fine-90 Scott PR2.

Collectors should bear in mind that the population reports maintained by Professional Stamp Experts apply only to stamps with PSE graded certificates.

An unused extra fine-90 example of Scott PR2 is valued at $575 in the Scott Stamp Values U.S. Specialized By Grade.

Kelleher has prepared a single 252-page catalog for the three-day Flagship Series auction that is available for viewing and download on the firm’s website, with online bidding options available on Stamp Auction Network.

In search of ideas for auction house premiums