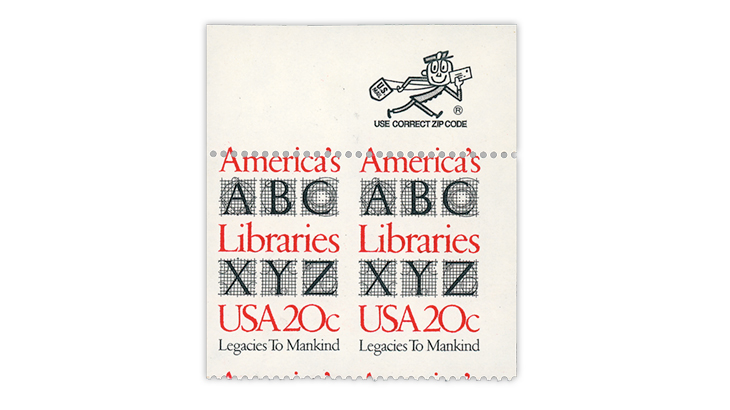 On Aug. 25-28, in conjunction with the Great American Stamp Show in Sacramento, Calif., Schuyler Rumsey Philatelic Auctions will conduct a series of three sales, two of which comprise notable name collections of United States stamps and postal history.

A newly reported error of a modern U.S. stamp will be up for bids during Rumsey’s Aug. 26 sale of the Alan Parsons U.S. collection.

The production miscue is a vertically imperforate horizontal pair of the 1982 20¢ America’s Library stamp (Scott 2015). A Mr. ZIP logo is printed on the attached top selvage margin above the right stamp.

Rumsey describes this error pair as being mint, never-hinged with original gum and is offering it with an estimate of $200 to $300.

Matt Kewriga, vice president of the Rumsey firm, told Linn’s Stamp News that Parsons probably acquired the error pair from a dealer or small auction house. “[Parsons] has quite a range of material,” Kewriga said.

This new error will become the fifth for this stamp when it is listed in the 2023 Scott Specialized Catalogue of United States Stamps and Covers to be published in early October.

The Scott editors have assigned No. 2015e to the error and will list it as “Horiz. pair, imperf. vert.”

Rumsey’s American Philatelic Society sale will be held Aug. 25-28 in four sessions (one session per day).

The aforementioned Parsons collection will cross the auction block on Aug. 26, followed by the Aug. 27 sale of the Peter Iwate collection of classic U.S. stamps and covers.

The three auction catalogs prepared for the APS, Parsons and Iwate sales can be viewed on the Rumsey website, or downloaded from the same site as PDF files. Online bidding is available through Stamp Auction Network.

Trio of PRC rarities in June 29 Kelleher and Rogers auction