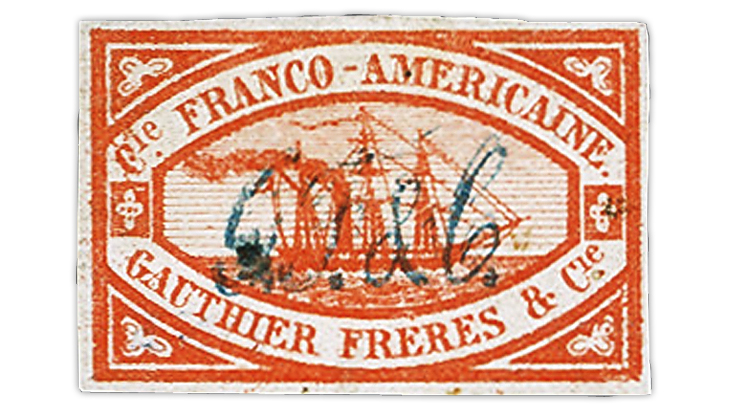 This “Barcelone” red ship letter stamp of Gauthier Freres and Co., part of Jan Berg’s specialized private ship letter collection, will be up for bids on the first day of the March 24-28 Heinrich Koehler auction in Wiesbaden, Germany. 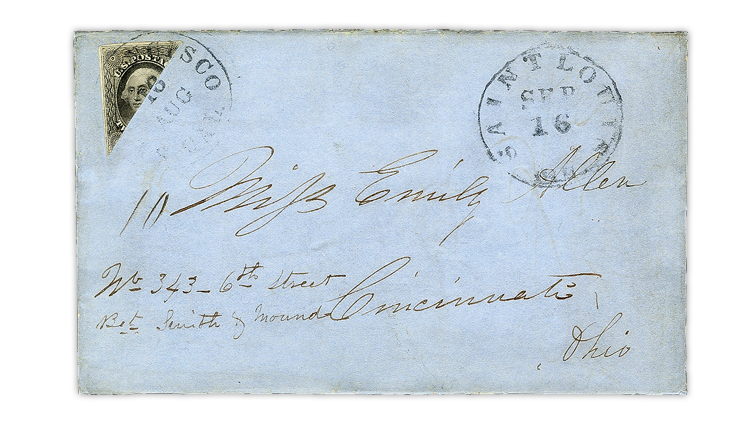 Koehler’s German and worldwide offerings during the five-day sale include an 1853 on-cover bisect use of the United States imperforate 1851 12¢ George Washington stamp. The bisect paid the 6¢ postage for a ½-ounce letter mailed a distance greater than 3,0
Previous
Next
Due to ongoing concerns regarding the coronavirus COVID-19 outbreak, this Koehler auction has been postponed to June 23-27.

Jan Berg’s specialized collection of private ship letter stamp-issuing companies up to 1900 will cross the auction block March 24 during Heinrich Koehler’s March 24-28 sale at the firm’s galleries in Wiesbaden, Germany.

The Berg collection will be followed by more than 3,100 lots of German and worldwide stamps, postal history and philatelic literature that will be up for bids during the five-day auction.

Koehler produced a separate catalog for the 219 lots in the Berg collection. In the catalog foreword, Koehler wrote: “Jan Berg’s collection includes great rarities of the private ship letter stamp issuing companies of the nineteenth century. Among the stamps and covers are items which have distinguished provenances from highly respected specialists and renowned collectors in their specialist areas.”

Koehler grouped the items in the Berg collection into six geographic categories: intercontinental, Caribbean, the Americas, Europe, Australasia, and Africa including the Suez Canal Co.

Leading off the sale is a lovely used “Barcelone” red ship letter stamp of Gauthier Freres and Co., which operated for just under one year during 1856-57. The stamp is listed with an opening bid of €4,000, approximately $4,400 as of late February.

Koehler describes the stamp as having “fresh colour and wide margins all around” and notes that just eight examples are recorded. The stamp also has a socked-on-the-nose “G.F. & Co.” manuscript cancel.

The stamp is accompanied by a 1996 British Philatelic Association certificate, according to Koehler, and is illustrated in the 1997 Encyclopedia of Rare and Famous Stamps by L.N. Williams.

Tucked inside the thick catalog for the March 24-28 German and worldwide sale are 30 lots of U.S. postal history, including a handful of trans-Atlantic stampless covers.

One of the more noteworthy items is a folded letter franked with a diagonal bisect of the imperforate 1851 12¢ George Washington (Scott 17a). The bisect paid the 6¢ postage for a ½-ounce letter mailed a distance greater than 3,000 miles. This rate went into effect July 1, 1851.

According to the accompanying 1981 Brettl BPP (Bund Philatelistischer Prufer, German for the Association of Philatelic Examiners) certificate, the cover was mailed Aug. 16, 1853, from San Francisco, Calif., to Cincinnati, Ohio. A second postmark, applied at top right, shows the cover transited through St. Louis, Mo., on Sept. 16.

Note that the San Francisco postmark ties the 6¢ franking on the bisect side of the stamp, a key indicator that the bisect is a genuine use on cover.

The catalogs for the March 24 Berg private ship letter collection sale and the March 24-28 German and worldwide auction can be viewed on the Koehler website. Online bidding options are available.