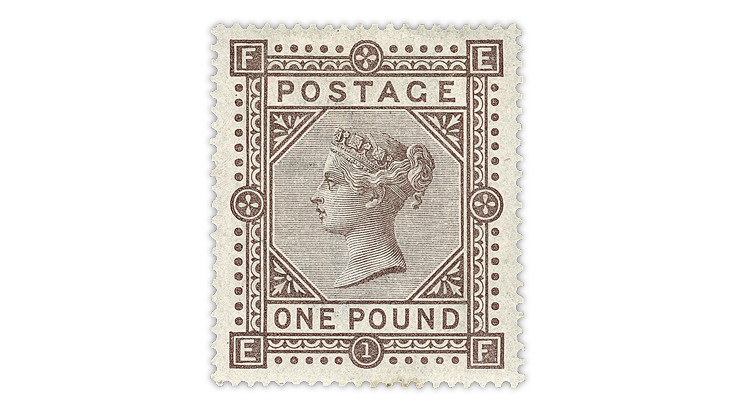 The March 19 auction by Siegel International includes this original-gum example of the 1882 £1 brown lilac Queen Victoria stamp on blued paper.

In the catalog prepared by Robert A. Siegel International for the March 19 auction of material from the Dimitris Bertsimas collection of Great Britain, Bertsimas describes the process he followed to assemble the material that will be offered.

“In addition to having the resources and access to honest and expert advice, the most significant strategy is to participate when major collections become available,” he wrote.

According to Bertsimas, most of the classic Great Britain stamps offered in the March 19 auction were originally bought in the respective auctions of the Sir Gawaine Baillie collection in 2005 and the William H. Gross collection in 2007.

The 148 lots in the upcoming auction, including single stamps and scarce multiples, range from the 1840 line-engraved issues to the 1935 2½-penny Prussian blue error of color on the King George V Silver Jubilee issue (Scott 229a).

Included are close to 40 different Officials, with such rarities as the 1890 £1 brown lilac Queen Victoria Official on paper watermarked orbs (Scott O13), lightly hinged, which carries a value of $100,000 in the 2019 Scott Classic Specialized Catalogue of Stamps and Covers 1840-1940. With approximately a dozen examples expertized, according to Siegel, it’s no surprise the Scott catalog value comes in italics to signify that the stamp can be difficult to value accurately.

The Official stamp is one of many obtained by Bertsimas from the Baillie collection sale.

Siegel estimates that no more than 20 to 30 examples exist in original-gum condition, with very few that are completely sound and well centered. This example was once part of the Gross collection.

The catalog for the Bertsimas auction can be viewed at https://siegelinternational.com.