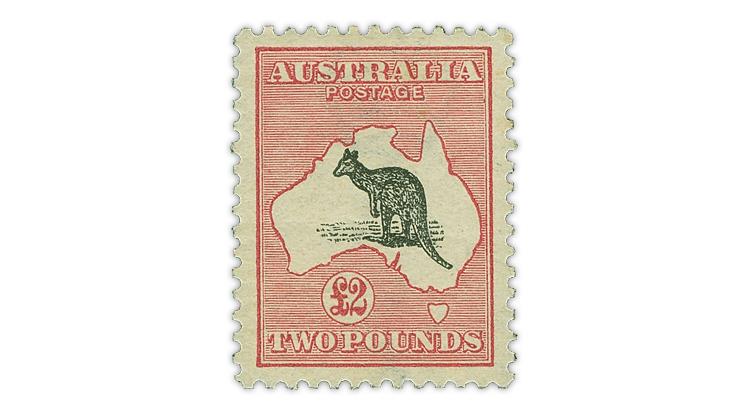 Colonial Stamp Co.’s Nov. 10 auction in Los Angeles will feature this desirable unused example of Australia’s 1913 £2 deep rose and black Kangaroo and Map stamp. The stamp has original gum that has been lightly hinged. 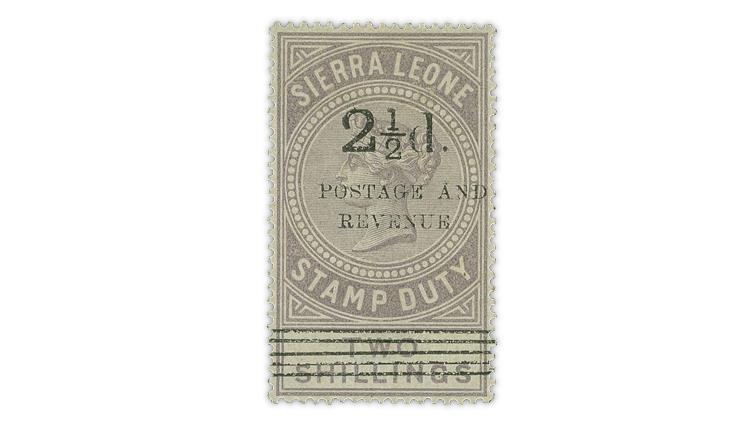 This handsome Sierra Leone 1897 2½-penny on 2-shilling Queen Victoria will be up for bids during the Nov. 10 Colonial auction. Colonial estimates the well-centered unused stamp at $5,600.
Previous
Next

The sale will open with 73 lots of Great Britain, including British offices in China and Morocco. The rest of the approximately 1,100 lots feature the British Empire from Aden to Zululand.

Among the 31 lots of Australia is an unused 1913 £2 deep rose and black Kangaroo and Map stamp (Scott 15) with excellent centering. Colonial states that the stamp has original gum that has been lightly hinged.

The £2 deep rose and black Kangaroo and Map stamp was printed from die II on paper watermarked wide crown and wide “A.” Stamps printed from die II do not show a break of the inside frameline at left. This break is “even with the top of the letters of the denomination,” according to the Scott Classic Specialized Catalogue of Stamps and Covers 1840-1940.

Against a Scott Classic Specialized catalog value of $6,000 (italicized to indicate a stamp that can be a challenge to value accurately), Colonial lists this handsome unused £2 stamp with an estimate of $9,100.

Included in the 13 lots of Bahamas is a used 1890 6-penny violet Queen Victoria (Scott 30) with a malformed second “E” in the “PENCE” inscription at the bottom of the stamp.

This variety is not listed in the Scott catalog but is listed as No. 54a in the Stanley Gibbons catalog. According to Colonial, the malformed “E” variety occurs on the sixth stamp in the sixth row of the pane.

Colonial draws attention to the light cancel in the top left corner of the stamp and describes the stamp as “a choice example of this scarce variety.”

A normal used example of the 1890 6d violet Queen Victoria is valued at $40 in the Scott Classic Specialized catalog.

Colonial is offering this unusual printing variety with an estimate of $1,160.

A scarce issue from Sierra Leone will cross the Colonial auction block late in the sale: a well-centered unused 2½-penny on 2-shilling Queen Victoria with the Scott type a overprint (Scott 60).

Colonial describes the stamp as “rare and undercatalogued” and notes that just 176 examples were printed. The example up for bids, which is very lightly hinged, is listed with an estimate of $5,600.

All 1,188 lots in the Nov. 10 auction are available for viewing on the Colonial Stamp Co. website, and bids may be placed online using the firm’s bid sheet.