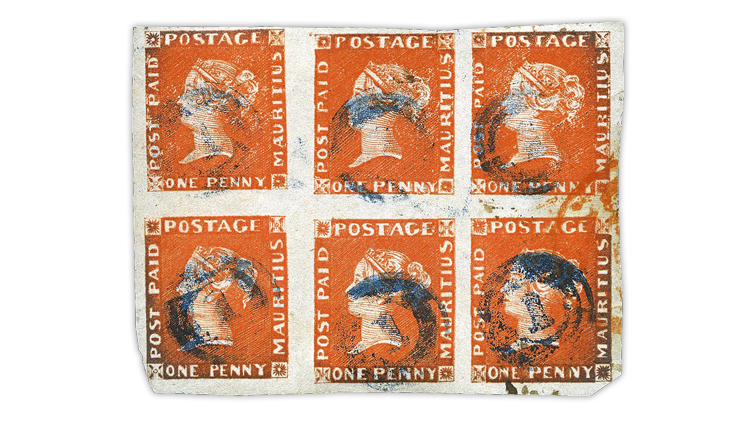 This block of six, identified as an earliest impression of the 1848 Mauritius 1-penny orange, will be offered during the April 1 David Feldman auction. Additional sales of St. Vincent and British Empire will also take place.
Due to ongoing concerns regarding the coronavirus COVID-19 outbreak, this Feldman auction has been postponed to June 29-July 3.

Wednesday will begin with specialized auctions of St. Vincent and Mauritius from the Tatiana collection, followed by material of Great Britain and the British Empire on Thursday and Friday.

Each sale includes its own treasures, such as the unique imperforate between horizontal pair of the 1875-77 St. Vincent 1-penny black Queen Victoria stamp, and rare varieties of the 1878 1-shilling vermilion stamp.

A showpiece of the Mauritius sale is the largest known multiple of the 1d orange Queen Victoria stamp from the 1848 Post Paid issue (Scott 3). The stamps in this block are each postmarked with the blue numeral 1 of Mahebourg, and the block is also struck with part of a red London datestamp applied in transit, according to Feldman.

Along with many other stamps and covers of the 1848-59 Post Paid issue, the Mauritius sale offers stampless covers and additional items through the 1858-62 Britannia issue, almost 200 lots in all.

The catalogs for this sale can be viewed online, with online bidding options available.