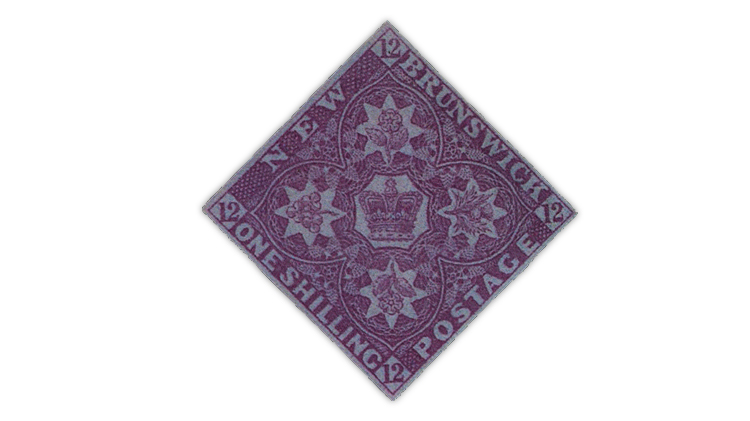 This marvelous example of the 1851 New Brunswick 1-shilling bright red violet stamp on blue wove paper will be up for bids during Eastern Auctions’ Feb. 28-29 sale in Halifax, Nova Scotia, Canada.

The auction will take place at the Lord Nelson Hotel and Suites, 1515 S. Park St., in Halifax, Nova Scotia, Canada.

Approximately 300 lots of material will be offered Friday. Highlights include mint and used collections of colonial Africa from a single estate, as well as single stamps and sets.

“From Afars & Issas to Zululand – virtually all British, French, German, Italian, Belgian, Portuguese and Spanish colonies are represented right up to last issues prior to Independence,” according to Eastern.

Particular strength is seen in the offerings of British North America, which include a number of scarce and rare stamps from the Canadian provinces.

An impressive rarity from this group is an unused example of the 1851 New Brunswick 1-shilling bright red violet stamp on blue wove paper (Scott 3). The ornate design features the crown of Great Britain and heraldic flowers of the United Kingdom.

Eastern describes the stamp as a “remarkably choice example” in very fine grade with four clear margins and “a fairly large portion of its original gum.”

The stamp once graced the renowned collection formed by Sir Gawaine Baillie and comes with a 1976 Friedl certificate signed by expert Herbert Bloch and a 1977 Brandon certificate. The back of the stamp also bears Bloch’s signature in pencil.

Eastern values the stamp in Canadian dollars at $60,000 (approximately US$46,000 in mid-January). Fewer than 12 examples can be considered in very fine grade, according to Eastern.

More than 450 lots of Canada will cross the Eastern auction block on Saturday. Essays, proofs, classic stamps and modern errors are among the highlights.

A number of Canada’s modern stamp varieties are also offered, including a “Missing Moose,” the dramatic error on the 2003 $5 Moose stamp with all intaglio printing absent.

The error creates a Moose stamp with no moose, grass or trees, only background, denomination and other text (Scott 1693a). Eastern is offering an upper right corner margin single with a value of C$7,500 (approximately US$5,750).

The auction lots for both days of the sale can be viewed on the Eastern Auctions website beginning in February, with online bidding options available.