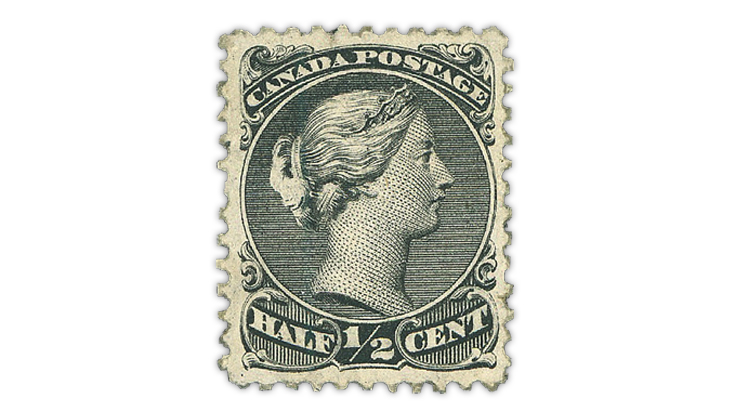 An important classic variety among the early stamps of Canada, this unused original-gum 1868 ½¢ black Large Queen stamp on watermarked Bothwell paper will be offered during the Nov. 15-16 auction by Eastern.

Among the Canadian classics is the stamp “believed to be the only known mint OG [original gum] example” of the 1868 ½¢ black Large Queen stamp on watermarked Bothwell paper (Scott 21b).

This unusual variety, one of six known unused examples, is hinged and described as very fine.

Normally issued without watermark, rare examples of the perf 12 stamp exist from a pane watermarked “E. & G. BOTHWELL / CLUTHA MILLS.” The stamp in this auction shows the watermark letter “G” from that impression, according to the auction firm.

Eastern acknowledges that this description contradicts past auctions of the same stamp, which identified the visible letter as “C,” including the February 2014 Ron Brigham auction. In its auction lot description, Eastern explains the examination that led up to the revised description.

The stamp also shows the chignon variety, a white area within the bun at the back of the queen’s hair. It was expertized by the Philatelic Foundation in 1972 and the Greene Foundation in 1986.

Some of Canada’s top rarities are also represented in this sale, including the 1851 12d black Queen Victoria on handmade laid paper (Scott 3), with one unused example and another struck with postmarks.

Three examples of the 1859 6d brown violet Prince Albert stamp perforated gauge 11¾ (Scott 13) are on offer, including one with never-hinged original gum and “the deepest colour and sharpest impression one can hope to find,” according to Eastern.

Modern varieties are also present in this auction, with a well-centered never-hinged mint example of the 1959 5¢ St. Lawrence Seaway stamp with its blue center inverted (Scott 387a), and an upper left corner margin example of the 2003 $5 “Missing Moose” stamp with all engraved colors absent, including those that normally create a portrait of a moose (Scott 1693a).

The booklet selection in this auction extends from 1900 into the 21st century, with single complete books, varieties in French and English, errors and large lots.

The auction catalog can be viewed online or downloaded as a PDF document, and online bidding options are available.