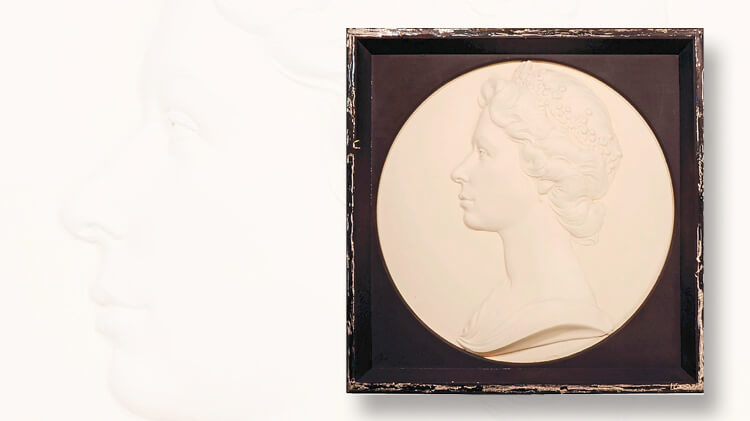 A plaster portrait by Arnold Machin of Queen Elizabeth II will be offered during the March 15-16 Cavendish auction in England. The portrait was fashioned as Machin developed his final version that would be used as the central design on what today are known as Great Britain’s Machin definitive stamps.

Cavendish Auctions in England will present its next public auction March 15-16 at the firm’s Cavendish House in Derby.

Perhaps the most stunning item in the auction is not a stamp at all, but a plaster portrait that led to the most reproduced stamp image of all time.

The profile portrait is of Queen Elizabeth II, and was executed around March or April of 1966 by the artist Arnold Machin. The portrait is based on the design he created two years earlier for British decimal coinage.

“This item was an early design piece used in the process that eventually resulted in the final accepted version: the Machin head, as used on GB [Great Britain] definitive postage stamps since 1967,” the Cavendish auction lot description states.

The firm reports that it is aware of one other cast of this model, in the National Postal Museum in London.

“Two casts of the final accepted Machin head have been auctioned in recent years,” Cavendish adds, “with Royal Mail paying £18,500 in 2008 for the first and the other fetching £21,000 in 2009. This latter example is now held by the Royal Philatelic Society London.”

Machin received the commission to create the queen’s portrait for a new stamp series in 1966.

His left-facing plaster portrait of the queen has been featured on British definitive stamps since the first was issued in 1967.

“It is said that the Queen’s attachment to the design will ensure that it will not be replaced during her reign,” Douglas Myall wrote in the preface to The Complete Deegam Machin Handbook in 1993.

Acknowledging the popularity of the Machin definitives among collectors and the mailing public, Royal Mail of Great Britain issued a prestige booklet in 2007 paying tribute to the design for the 40th anniversary of the first issued Machin stamp. In June of this year, Royal Mail is planning a new set of stamps to mark the 50th anniversary.