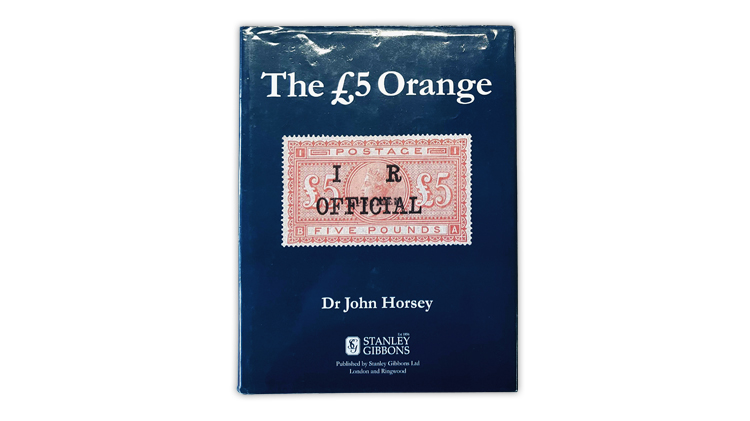 This copy of The £5 Orange by John Horsey, published by Stanley Gibbons in 2013, will cross the auction block during Cavendish Philatelic Auctions’ July 30 sale of worldwide and British philatelic literature.

“Most of the publications offered in this auction are from an established library, and as such may contain library markings and labels. Occasionally end papers have been removed, spines and corners have been strengthened, and tears have been repaired,” according to Cavendish.

The firm also advises that sets of journals and magazines “have not been checked for continuity or completeness.”

The sale consists of 482 lots, of which 440 are devoted to worldwide literature and 42 to Great Britain literature.

One of the iconic stamps of the British classic period is the large £5 bright orange Queen Victoria issued in 1882 (Scott 93). Two scarce color varieties printed on bluish paper, pale dull orange (93a) and bright orange (93b), also are known.

A handsome copy of the book is up for bids in the Cavendish auction with a presale estimate of £30 (approximately $38 in early July). Included with the book is the “SG [Stanley Gibbons] GB [Great Britain] Collector’s Guide with an article by Horsey,” according to Cavendish.

The sale catalog can be downloaded as a PDF document from the Cavendish website, www.cavendish-auctions.com. Online bidding options are available.