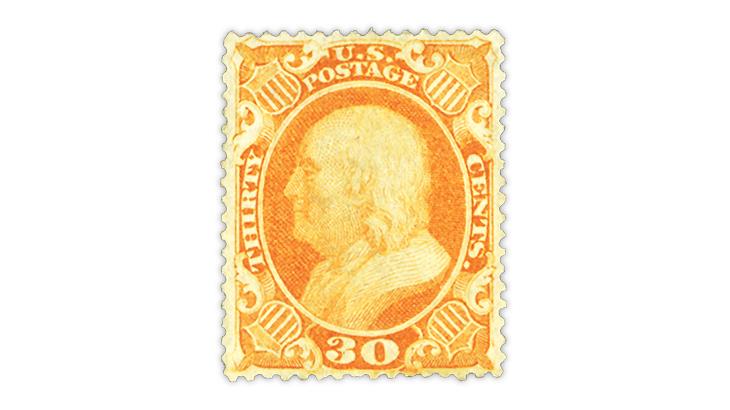 This United States 1860 30¢ orange Benjamin Franklin stamp, graded extra fine-superb 95 by Professional Stamp Experts in 2020, will be up for bids during Cherrystone Philatelic Auctioneers’ May 25-26 sale of U.S. and worldwide stamps and postal history. 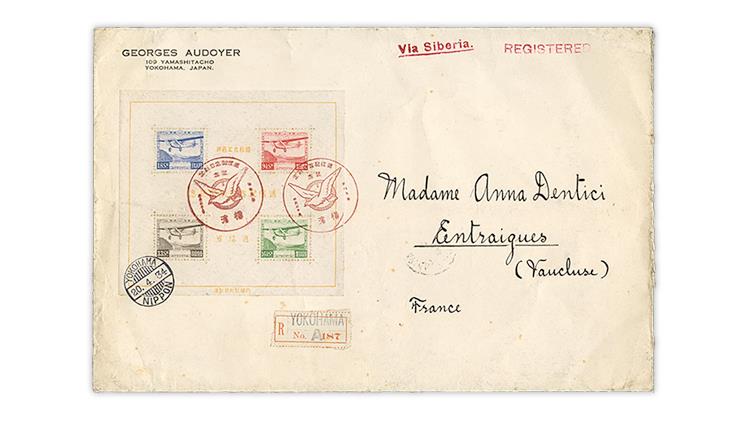 The Japanese Communications Commemoration Day souvenir sheet of four on this attractive registered cover from Yokohama, Japan, to Entraigues, France, is postmarked April 20, 1934, the first day of issue of the sheet. The cover is listed with an opening bid of $700 in the May 25-26 Cherrystone auction.
Previous
Next

Cherrystone Philatelic Auctioneers will offer more than 1,300 lots of United States and worldwide stamps and postal history during a sale to be conducted May 25-26 at the firm’s gallery in Teaneck, N.J.

A specialized collection of French Indochina offered in the foreign section includes 19th-century military and civilian mail from what is today Cambodia, Laos, Vietnam and Thailand. According to Cherrystone, the “collection was formed by a former French Colonial resident, with an excellent eye for postal history and considered a foremost expert of the subject.”

The German section includes used and unused items from an “old time collection formed with assistance from Herbert Bloch and the Friedl Expert Committee.”

Rounding out the foreign section are Great Britain and British Commonwealth “followed by a collection of Imperial Japan, including the original collection formed in 1875 by Baron Maejima Hisoka, founder of the Japanese Postal System,” according to Cherrystone.

Other notable items in the auction include Italian offices in China, Krakow issues from Poland and more than 300 lots of Russian zemstvo stamps. Zemstvo stamps are local stamps issued by Russian municipal governments, known as zemstvos, in accordance with an 1870 imperial edict.

One of the more notable U.S. stamps to tempt potential bidders is an unused 1860 30¢ orange Benjamin Franklin (Scott 38) from the 1857-61 definitive series.

This stamp, which has part of its original gum, is described by Cherrystone as possessing “fresh color” and being “extremely well centered for this tight margined issue.”

A 2020 graded extra fine-superb 95 certificate from Professional Stamp Experts accompanies the stamp, which Cherrystone is offering with a minimum bid of $3,500.

For comparison, an extra fine-superb 95 example of the 1860 30¢ orange Franklin with full original gum is valued at $11,000 in the Scott Stamp Values section of the Scott Specialized Catalogue of United States Stamps and Covers.

Several colorful sets of 1881 Atlanta plate proofs of the 1869 Pictorial issue are up for bids, including a complete set of 14 bicolor proofs of the 30¢ Eagle and Shield (Scott 131TC4a-131TC4n).

According to the Scott U.S. Specialized catalog, the Atlanta proofs were produced in five colors (black, scarlet, brown, green and blue) “on thin card reprinted in 1881 for display at the International Cotton Exhibition in Atlanta, Ga.”

Cherrystone lists this Atlanta proof set of the 30¢ Eagle and Shield with an opening bid of $2,500. A complete set of 14 proofs is valued at $5,625 in the Scott U.S. Specialized catalog.

Among the worldwide highlights is a handsome airmail first-day cover from Japan franked with a single 1934 Communications Commemoration Day souvenir sheet of four (Scott C8).

The cover was sent April 20, 1934, via registered mail from Yokohama to Entraigues, France. Entraigues is located in the department of Vaucluse, which is written in parentheses in the address.

A clear April 20 Yokohama handstamp neatly ties the sheet to the cover in the bottom left corner. A Yokohama registry label is affixed to the cover, just below the sheet.

Two strikes of a decorative handstamp featuring a flying bird cancel the four stamps in the sheet. The stamps show the same design of a passenger plane flying over Lake Ashi.

A footnote in the Scott Classic Specialized Catalogue of Stamps and Covers 1840-1940 explains that the sheet was issued for Communications Commemoration Day to mark the first observance of the establishment of Japan’s postal service and the issuance of the country’s first four postage stamps in 1871 (Scott 1-4). The sheet was sold only at the philatelic exhibition held April 20-27, 1934, in Tokyo.

The registered Communications Commemoration Day souvenir sheet FDC in the auction is offered with an opening bid of $700.

A used example of the Communications Commemoration Day souvenir sheet in the grade of very fine has a Scott Classic Specialized catalog value of $1,300.

A representative example is a selection of 18 1905-15 Coat of Arms stamps from the zemstvo of Poltava, which Cherrystone lists with a modest opening bid of $140.

The stamps range in denomination from 1 kopeck to 30kop. Included in this mini collection are two pairs of the 1kop orange Poltava Coat of Arms, one unused and the other used. The stamps are shown neatly mounted on a quadrille album page.

The two-day sale will conclude with more than 100 collection lots that Cherrystone describes as “ranging from single country albums to specialized collections, multi-carton worldwide properties and large cover lots.”

One such collection that will cross the auction block contains 89 covers from Syria and Alaouites dating from 1920 to 1948. Alaouites was a division of Syria that became an independent state in 1924 under the French Mandate.

Cherrystone is offering this colorful array of Syrian postal history with a minimum bid of $1,400.

The catalog for the May 25-26 sale can be viewed and is available for download on the Cherrystone website, with online bidding options available.