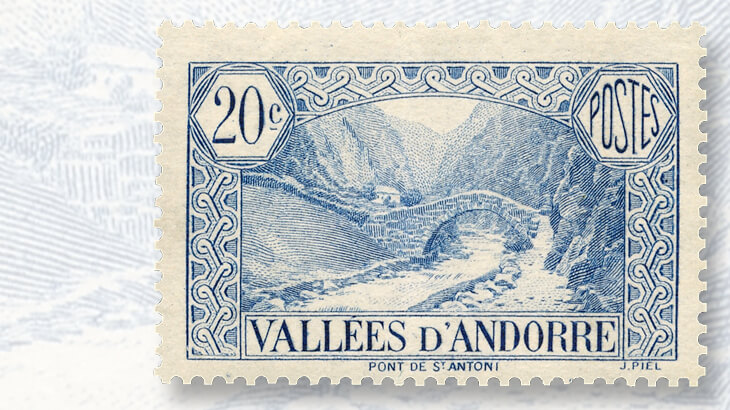 Another rare variety in the upcoming Gaertner auction is this mint 1932 stamp from Andorra’s French administration printed in ultramarine rather than the light rose of the issued stamp. 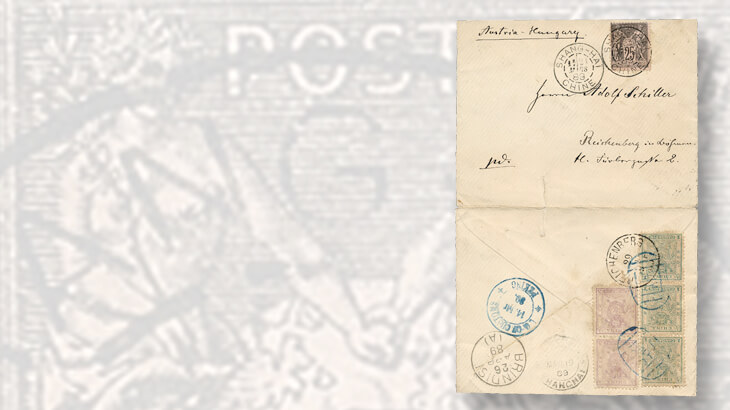 Mailed from Beijing to Bohemia, this 1889 cover is franked with Chinese Small Dragon definitives on the back, and a French 25-centime Navigation and Commerce stamp on the front. 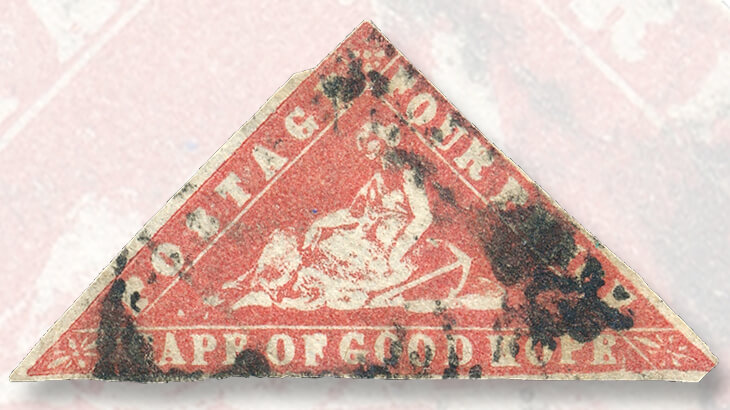 A rare 1861 Cape of Good Hope Woodblock 4-penny carmine error of color will be featured in the Feb. 21-24 Christoph Gaertner auction. 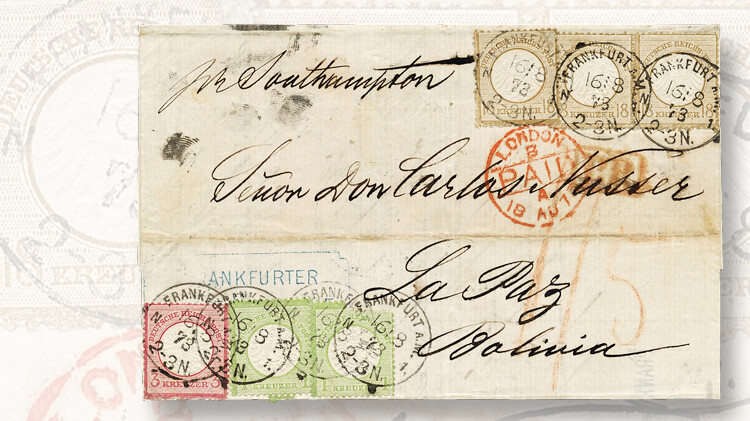 The upcoming Gaertner sale also offers an 1873 cover from Germany to Bolivia franked with six stamps paying the pricey 59-kreuzer rate for the long postal journey via England.
Previous
Next

In the 36th of its trademark gargantuan sales, the auction firm of Christoph Gaertner will be offering a broad range of worldwide philatelic material Feb. 21-24 at its headquarters near Stuttgart, Germany. A sale of banknotes, coins, and medals takes place Feb. 9-10.

The entire sale, whose catalog stretches to 12 volumes in total, kicks off with 1,700 lots of Asian postal history and continues with further sections devoted to Europe, the rest of the world, topical offerings and picture postcards.

Some fascinating thematic collections are included, as well as an original letter discussing Judaism penned and signed by 16th-century religious reformer Martin Luther.

Rare stamps in the sale include a lovely Cape of Good Hope 4-penny triangular Woodblock error of color, and an unissued French Andorra 20-centime stamp.

South Africa’s first stamps, in 1853, were the famous Cape Triangles, engraved in England by William Humphrys for Perkins Bacon, the same firm that printed the Penny Black and other British 1d and 2d engraved stamps.

Humphrys previously lived in the United States and is believed to have engraved the portrait of George Washington that appears on the U.S. 1847 issue.

In 1861, when stamps ran low, the 1d and 4d Triangle designs were reproduced locally in Cape Town. Because of their rather crude appearance, these are popularly dubbed the Woodblock prints, even though that is inaccurate; they were actually engraved on steel and printed from stereotyped plates.

Back in London, the Perkins Bacon plates were eventually handed over to De La Rue, and a further issue of the original fine designs, in slightly changed colors, completed the Triangles series in 1863-64.

The Woodblocks generally mimicked the colors of the original issue: vermilion for the 1d and milky blue for the 4d.

However, each plate somehow got a single cliche of the wrong value, so that on a few of the stamps, the colors are switched: milky blue for the 1d (Scott 7c) and vermilion or carmine for the 4d (9f or 9g).

The 4d carmine error in the Gaertner sale, which is accompanied by a recent Royal Philatelic Society London certificate, has reasonably complete margins and tiny faults, but is canceled lightly enough that the denomination “Four” is clearly visible.

The tiny Pyrenees mountain enclave of Andorra, jointly ruled by France and Spain, is philatelically famous for having twin postal systems, each issuing its own stamps.

At first, these were simply overprinted French or Spanish definitives, but those were soon replaced by specially designed pictorial definitives showing local landmarks.

The French pictorial series, issued between 1932 and 1943, ran to an astonishing 56 stamps, ranging in denomination from 1 centime to 50 francs.

The 20c stamp, depicting the old stone Bridge of St. Anthony, was regularly issued in light rose (Andorra, French Administration Scott 29), but a footnote in the Scott Classic Specialized Catalogue of Stamps and Covers 1840-1940 mentions that it also exists in an unissued ultramarine version.

Just one sheet of 25 was printed in that color, according to Gaertner. The mint never-hinged example in this sale, signed by two experts and accompanied by a French expert’s certificate, starts at $26,700.

Standout items among the postal history in the sale include a cover sent from China to Bohemia (then part of Austria) in 1889.

The cover began its journey at the customs office in Beijing, which handled mail going abroad. It was franked on the back with a strip of three 1-candareen Small Dragon definitives, perforated 12½ (Scott 10) and a pair of 3ca stamps perforated gauge 12 (Scott 14), together paying the 9ca international rate.

Postmarks show that the letter went to Shanghai, where it passed through the customs office, and then the French post office there. At the latter stop, it was further franked on the front by a French 25c stamp of the Navigation and Commerce series (Scott 100).

Then it set sail for Europe, arriving in the Italian port of Brindisi a month later. It traveled overland to Austria, reaching its destination at Reichenberg (present-day Liberec, in the Czech Republic) three days later.

The cover, which has been opened out for display, has a starting bid of $16,000.

An 1873 cover from Germany to the unusual destination of Bolivia bears a colorful, high-value franking from the Eagle and Shield series issued the year before.

These first definitives of unified Germany come in two varieties, showing either a small or a large shield on the breast of the embossed eagle. A pair and a single of the 18-kreuzer high denomination with small shield (Scott 11), together with two 1kr and a 3kr of the large-shield set (21, 23), paid the extraordinary 59kr rate via England.

Bidding for this cover, considered a unique combination of high franking and remote destination, also starts at $16,000.

Among thematic lots is a 21-volume collection on the life and work of Albert Einstein and his research into the nature of space, time, gravity, and matter itself, starting at $19,200.

Gaertner adds a 22 percent buyer’s premium plus a €2 handling fee to all lots. Buyers outside Europe are generally exempt from paying value-added tax. As with any sale, bidders should read the terms and conditions carefully before placing bids.

Further information about the sale, as well online bidding, can be found here on Gaertner’s website, (click on “English” then “Current Auction”). Lots also may be browsed and bid on at the U.S.-based auction site StampAuctionNetwork.com, which has a more transparent interface.