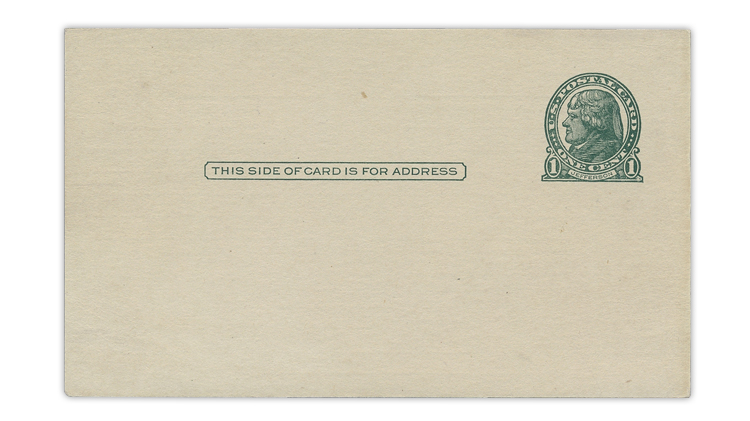 The Oct. 19-22 Christoph Gaertner auction in Germany includes a section of United States postal cards. This 1916 1¢ green Thomas Jefferson issue is a scarce variety with a recut design printed on a gray rough-surfaced card.

The next offerings from the Christoph Gaertner auction firm have been posted online, with final bidding taking place Oct. 19-22. Auction catalogs can be viewed or downloaded as PDF documents on the Gaertner site.

The auction will take place at the offices of the German company with some restrictions in place because of the coronavirus pandemic. See the auction firm’s online site for additional information.

Bids for this sale can be placed online through Stamp Auction Network and on the Gaertner website.

The final two days of the auction will showcase well over 6,400 collections of German, European and worldwide material, including estates.

The individual lots offered Tuesday and Wednesday are similarly international in nature, along with specialized material that includes Germany and its offices during World War II, old German states, Asia and thematics.

Standing out among the rarest of the postal card major number listings in the Scott Specialized Catalogue of United States Stamps and Covers is the 1916 1¢ green Thomas Jefferson with the die II design printed on a gray rough-surfaced card (Scott UX27D).

At first glance, the card looks like a million other common 1¢ postal cards, but a closer look reveals the recut image of Jefferson’s queue distinguishing it as die II, and the rough gray card that is unlike the common buff card.

Gaertner cites a 2010 United Postal Stationery Society census tallying six known mint cards of this major variety and describes the example in its auction as mint, fresh and fine.

The 2022 Scott U.S. Specialized catalog assigns a value of $20,000 for an unused example, with the dollar amount printed in italics to identify the unused card as one that can be difficult to value accurately.

The starting bid for the mint postal card in this auction is €5,000, approximately equivalent to $5,820 near the end of September.

Some additional early postal card issues are offered with unusual varieties, including double and triple impressions, and a couple that show double impressions with one impression inverted.

Among the more recent varieties is one that Gaertner describes as the only recorded example of the 1971 6¢ America’s Hospitals postal card with red and black colors omitted (Scott UX60c). Listed but not valued in the Scott catalog, the postal card error is offered with a starting bid of €3,000 ($3,490).

The well-known 1962 Stage Art of Mei Lan-fang $3 souvenir sheet from the People’s Republic of China (Scott 628) is offered “in good condition” according to Gaertner, with complete gum and a canceled-to-order first-day cancel. Citing a Michel catalog value of €8,000, Gaertner will open the bidding at €4,000 ($4,655).