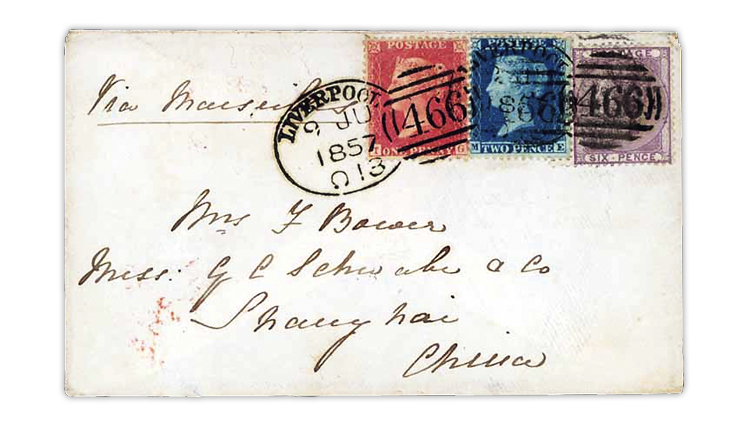 The May 12 Cavendish Philatelic Auctions sale in London features a compact assortment of British covers mailed to and from Shanghai, China, including this cover with an attractive three-color Queen Victoria franking sent June 9, 1857, from Liverpool, Engl 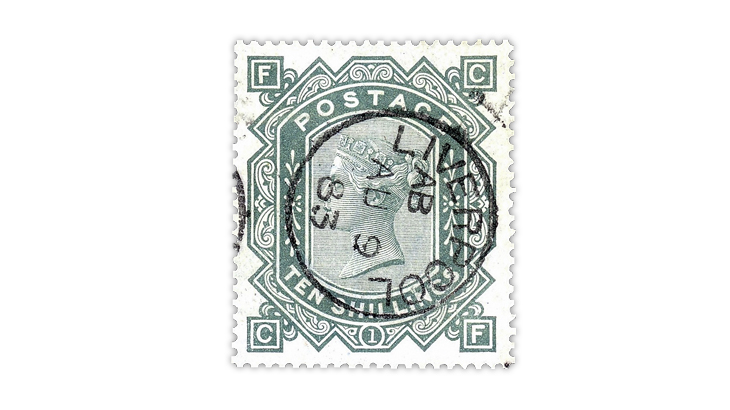 Classic Hong Kong, China, China treaty ports and early issues of Great Britain will be sold May 12-13 by the London-based Cavendish Philatelic Auctions.

Highlights of the May 12 sale include the Russell Muir and Peter Ball collections of stamps and postal history. Headlining the May 13 auction is the Coxon collection of Great Britain.

Numerous appealing and eye-catching items of postal history to satisfy a broad range of collector budgets will be up for bids in both sales.

Approximately 40 lots in the May 12 auction are devoted to British covers mailed to and from Shanghai, China. Among the more colorful items is an envelope sent June 9, 1857, from Liverpool, England, to Shanghai.

This handsome cover, which Cavendish describes as having exhibition quality, is offered with an estimate of £300, approximately $375 in mid-April.

Stamps are generally represented by several or more used examples, many of which have bold, clear postmarks.

Among the high-denomination Queen Victoria stamps to cross the Cavendish auction block is an 1883 10-shilling slate on bluish paper bearing an Aug. 9, 1883, socked-on-the-nose postmark from Liverpool.

Cavendish describes the stamp as being very fine and notes that it comes with a 1996 Philatelic Expertising Great Britain certificate.

Auction catalogs for both Cavendish sales may be viewed and downloaded from the firm’s website, with online bidding options available.