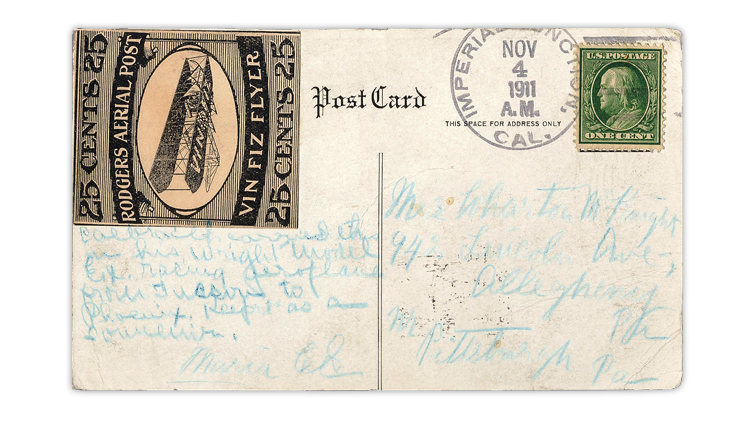 An airmail rarity from 1911, the United States 25¢ Rodgers Aerial Post Vin Fiz Flyer airmail semi-Official stamp on a postcard, one of seven flown cards known. This example will be auctioned in Vienna April 15-17.

The Classicphil firm of Vienna, Austria, reports that its first auction will take place April 15-17 at Vienna’s Fleming’s Selection Hotel, Josefstaedter Strasse 10-12. More than 2,300 lots are listed in full color in the auction catalog sent out by Classicphil in March.

The vast majority of the material consists of worldwide stamps in singles and multiples, though an occasional proof appears and is so described among the listings.

Another exception is the postcard pictured here, mailed in 1911 and franked in part with the 25¢ Rodgers Aerial Post Vin Fiz Flyer semi-Official airmail stamp (Scott CL2).

Only 13 examples of the stamp are known, including seven used on postcards. The example listed in this auction was discovered some 17 years ago and was pictured in the Jan. 14, 2002, Linn’s Stamp News after it sold at a Robert A. Siegel auction for $44,000.

The 2019 Scott Specialized Catalogue of United States Stamps and Covers values the semi-Official stamp on postcard with the 1¢ green Benjamin Franklin stamp (Scott 374) at $75,000, with that figure in italics to denote an item that can be difficult to value accurately.

Another U.S. rarity in the auction is an example of the 1979 $1 Candle Holder stamp with the intaglio brown printing inverted, an error commonly known as the CIA invert. It carries a value of $17,500 in the Scott U.S. Specialized catalog and opens in the Classicphil auction with a €3,800 ($4,260) minimum bid.

An unused example of Romania’s 81-parale blue Coat of Arms stamp from 1858 (Scott 4) is being offered as well, one of three known stamps with original gum, according to the auction firm.

Stamps are shown front and back in the online auction catalog at https://classicphil.com. Prominent rarities in the printed catalog receive the same treatment.