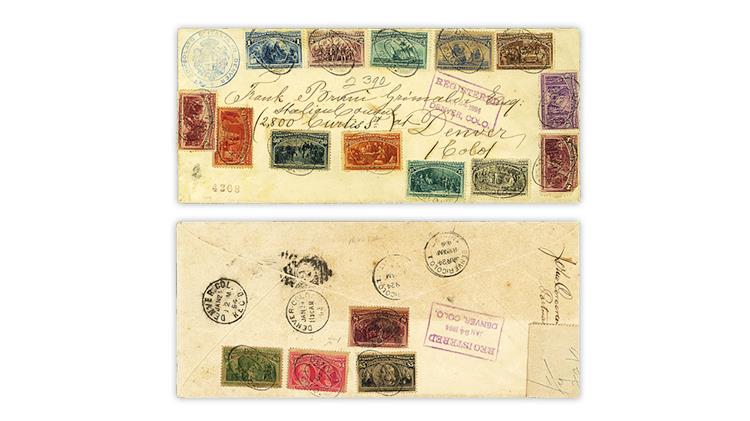 This registered cover sent locally in Denver, Colo., in late January 1894 is franked with a complete set of the United States 1893 Columbian Exposition issue. The 16 stamps in the set range in denomination from 1¢ to $5. The cover is one of almost 1,400 l 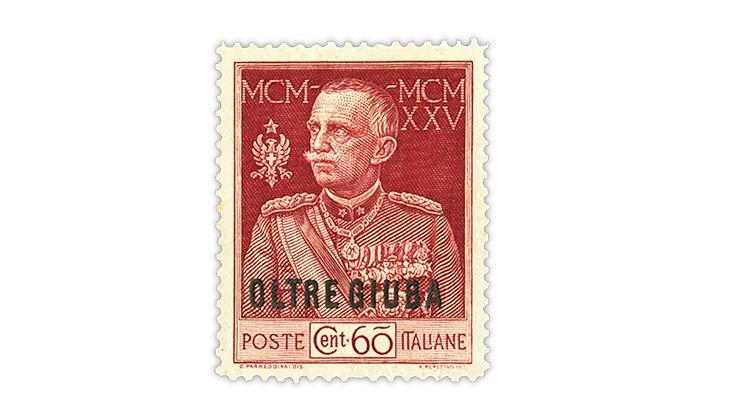 Cherrystone is offering this Oltre Giuba 1925 60-centesimo brown carmine King Victor Emmanuel III stamp with gauge 13½ perforations in its Aug. 10-11 sale. The stamp is never hinged and is offered with an opening bid of $4,500.
Previous
Next

Cherrystone Philatelic Auctioneers is presenting almost 1,400 lots of United States and worldwide stamps and postal history in the Aug. 10-11 sale at the firm’s headquarters in Teaneck, N.J.

Cherrystone is conducting the two-day sale in four sessions, with sessions each day at 10 a.m. and 1 p.m. Eastern Time.

Leading off the sale are 360 lots of U.S. and possessions stamps and covers. Selections include all major U.S. definitive and commemorative issues of the 19th century and early 20th century, beginning with the 1847 issue and continuing through the regular issues of 1917-29.

The 1¢ through the $2 denominations are affixed to the front of the cover, and the $3, $4 and $5 stamps and an additional 8¢ Columbian are on the back. Both sides of the cover are shown here. All 17 stamps are tied by oval Denver registry handstamps.

The cover is addressed to Frank Bruni Grimaldi at the Italian Consulate in Denver. The consulate’s ornate handstamp in blue is in the top left corner on the front of the cover. Denver handstamps on the back indicate that Grimaldi received the letter the same day it was mailed.

Several of the stamps are faulty, the most noticeable being the 8¢ on the front of the cover, which has a torn corner at top right. The stamps are centered very good to fine-very fine, according to Cherrystone. The cover also has what Cherrystone describes as “some overall toning” on the back.

This colorful Columbian Exposition registered cover comes with its original registry receipt and is offered with a minimum bid of $7,000.

Among the offices in China items in the sale is an unused 1919 20¢-on-10¢ orange yellow (Scott K10) with “large margins all around,” according to Cherrystone.

This stamp, which Cherrystone lists with an opening bid of $120, comes with a 2021 graded 95 certificate from Philatelic Stamp Authentication and Grading.

An unused example of Scott K10 in the grade of extra fine-superb 95 is valued at $160 in the 2021 Scott Specialized Catalogue of United States Stamps and Covers.

The bulk of the two-day auction is focused on worldwide stamps and postal history, beginning with Argentina and continuing through the alphabet to Western Ukraine.

Oltre Giuba, also known as Italian Jubaland, was a strip of land west of and parallel to the Juba River in East Africa.

Cherrystone describes this rare Oltre Giuba perforation variety as being never hinged and well centered. The stamp is signed by noted Italy and Italian States expert Alberto Diena and is accompanied by 2008 Giacomo Bottacchi and 2020 Filippo Ferrario expertizing certificates.

The catalog for the Aug. 10-11 U.S. and worldwide sale can be viewed and is available for download on the Cherrystone website, with online bidding options available.