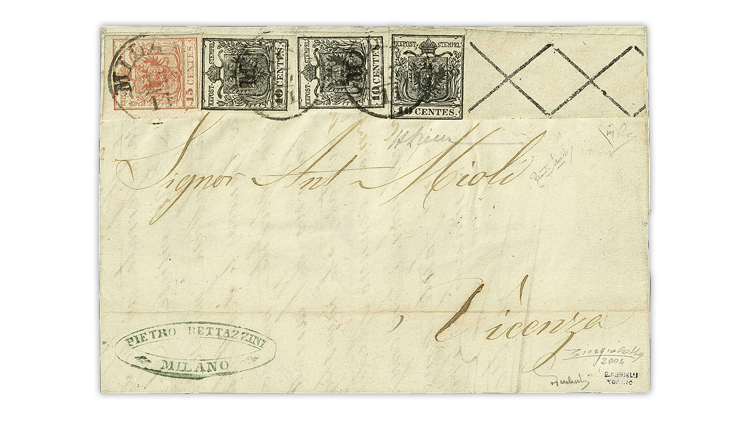 This rare 1857 Lombardy-Venetia cover from the Erivan collection will be auctioned June 14 in Zurich, Switzerland, by Corinphila. 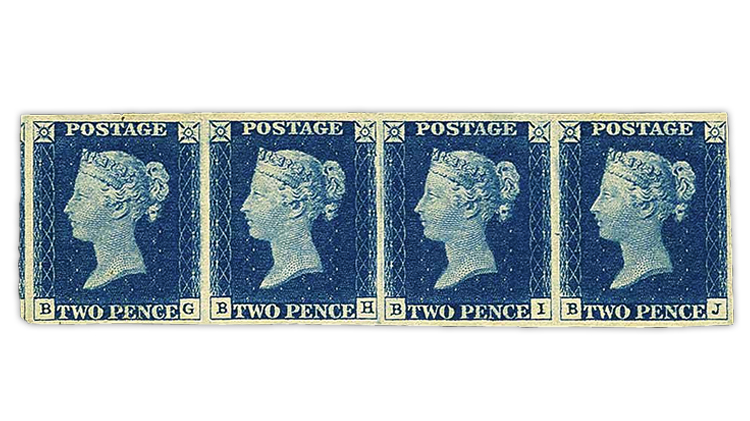 The 10 designated Corinphila auctions taking place in Zurich June 11-17 include a specialty collection of Great Britain from 1840-1910, which will offer this unused horizontal strip of four of the Two-Penny Blue.
Previous
Next

The Swiss auction firm Corinphila has prepared a 10-volume auction catalog series for the sales of stamps and postal history taking place June 11-17 at its Zurich facility.

Some of this material will be of particular interest to specialty collectors in part because of its provenance.

The South and Central America material comes from the estate of the deeply respected authority in Latin America philately, Brian Moorhouse (1949-2017), a prominent researcher, collector and dealer in the field.

The Austria and Lombardy-Venetia auction will offer items from the collection of Erivan Haub (1932-2018), the worldwide collector and retail business leader whose holdings are being dispersed in a series of sales that began this spring and will continue into 2023.

The Erivan sale in this Corinphila series includes an 1857 cover of particular rarity and interest to specialists.

Stamps were issued for the kingdom of Lombardy-Venetia within the Austrian empire from 1850 into the 1860s. The earliest of these were printed in sheets of 60: eight across and eight down, with four positions showing only what is known as a St. Andrew’s cross — a simple large printed X — filling the stamp space so that the sheet contained a round number of stamp subjects (60 rather than 64).

Covers franked with stamps that include an adjoining St. Andrew’s cross are unusual and prized by collectors. The Lombardy-Venetia cover mailed from Milan in this sale is franked with four of the Coat of Arms issue, including one 10-centesimo black with two complete St. Andrew’s Crosses adjoining to the right. Two additional 10c black stamps and one 15c bright red complete the franking for delivery to Vicenza.

Each auction in the upcoming series has its own gems to consider, with bidding for some items starting at under 100fr and beginning at a substantially higher level for others.

The Moorhouse auction includes, for example, an unused single of Argentina’s 1930 1-peso Zeppelin First Flight stamp with inverted overprint (Scott C22a). Though only 100 were printed, according to Corinphila, the bidding for this variety begins at only 220fr.

The Australia sale has two examples of the 1879 Western Australia 2-penny mauve (lilac) Swan error of color (Scott 31a), one unused and one neatly canceled. Bidding for each will start at 5,000fr.

The Great Britain material includes an unused horizontal strip of four of the 2-penny Queen Victoria in the shade described by the Stanley Gibbons catalog as deep full blue, plate 1. Once part of the collection of King Carol II of Romania, the strip is offered with a starting price of 60,000fr.

Details of these auctions are provided on the website at https://corinphila.ch/en, including online listings for the material in all 10 auction catalogs, as well as PDF catalogs that can be individually downloaded.