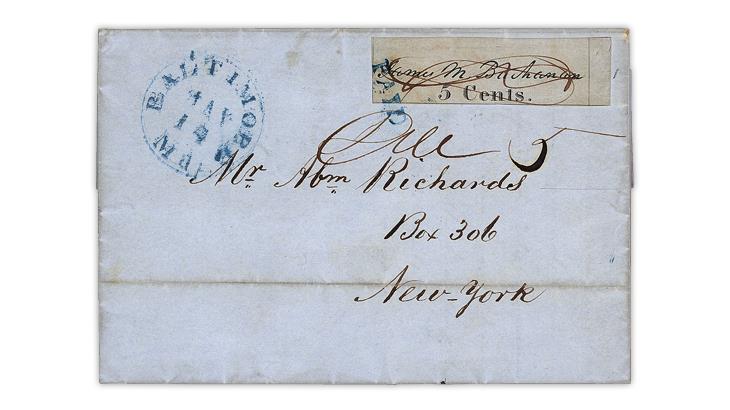 Daniel F. Kelleher Auctions’ June 15-17 sale of the Crimson collection of United States and possessions stamps begins with a nice selection of postmasters’ provisionals, including this 1846 folded letter franked with a Baltimore, Md., postmaster’s provisi 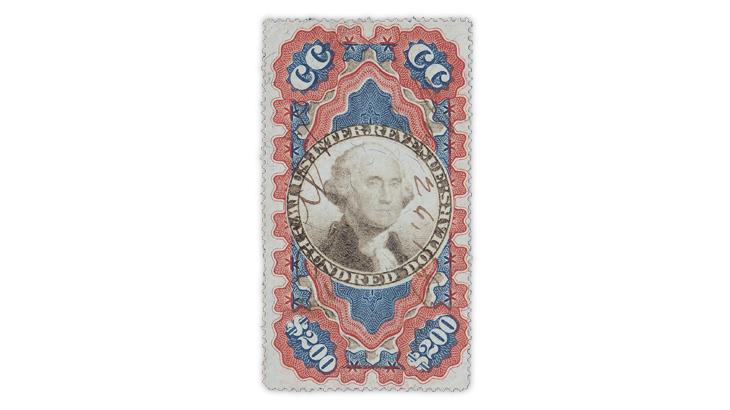 This 1871 $200 red, blue and black George Washington documentary revenue stamp, popularly called the small Persian Rug, is one of more than 400 lots of revenue issues being offered in the June 15-17 Kelleher auction. Kelleher lists the stamp with an openi
Previous
Next

Daniel F. Kelleher Auctions will present the Crimson collection of high-quality United States and possessions stamps and revenue issues during a three-day sale to be held June 15-17 at the firm’s gallery in Danbury, Conn.

More than 1,200 lots will be offered during the sale, with each day’s session beginning at 11 a.m. Eastern Time.

Numerous choice stamps in a broad range of prices will be up for bids. Highlights include inverted center errors, Bank Note special printings, scarce coils, Official and newspaper stamps, and more.

The June 15 session will serve up postmasters’ provisionals and U.S. stamps and covers from the 1847 issue to the 1901 Pan-American Exposition postage stamps.

Leading off the 26 lots of postmasters’ provisionals is an 1846 blue folded letter franked with an 1845 5¢ black Baltimore, Md., postmaster’s provisional printed on bluish paper (Scott 3X3) that was mailed from Baltimore to New York City.

Kelleher notes that the stamp on this cover is from position 10 in the sheet of 12. An explanatory note in the Scott Specialized Catalogue of United States Stamps and Covers states the Baltimore postmaster’s provisional was printed from “a plate of 12 (2x6) containing nine 5c stamps (Pos. 1-6, 8, 10, 12) and three 10c (Pos. 7, 9, 11).”

A blue May 14 Baltimore circular datestamp was applied to the cover at upper left. A manuscript “Due 5” just beneath the stamp indicates 5¢ postage due for a double-weight letter.

This Baltimore postmaster’s provisional cover once resided in the Erivan Haub collection and is accompanied by a 2016 Philatelic Foundation certificate stating that the cover represents a genuine usage of the stamp.

Kelleher describes this cover as an exceptional and scarce use of the Baltimore postmaster’s provisional and is offering it with an opening bid of $3,000.

Kelleher describes this stamp as being “mathematically centered on fresh paper” and possessing “deep color with razor-sharp engraving.”

An unused example of Scott 211 graded extra fine-superb 95 is valued at $1,150 in the Scott Stamp Values section of the Scott U.S. Specialized catalog. The stamp in the Kelleher sale is listed with a minimum bid of $500.

The June 16 session includes numerous Washington-Franklin issues, airmail stamps, broad selections of postage due and newspaper stamps, and much more.

A standout among the 50 lots of postage due stamps is a never-hinged 1879 30¢ brown (Scott J6) that Kelleher describes as “Post Office fresh with lovely, deep color and crisp lines.”

Expertizing certificates from the Philatelic Foundation (issued in 2006) and Philatelic Stamp Authentication and Grading (2021) each assigned a grade of extra fine 90 to this 30¢ postage due, which Kelleher is offering with an opening bid of $600 and an estimate of $1,200 to $1,800.

A never-hinged, extra fine 90 example of Scott J6 is valued at $1,800 in the Scott U.S. Specialized catalog.

More than 400 lots of revenue stamps will be up for bids during the final day of the sale, June 17.

One of the more colorful revenue stamps to cross the auction block is an 1871 $200 red, blue and black documentary featuring a central portrait of George Washington (Scott R132), more familiarly known to collectors as the small Persian Rug.

Kelleher says that the stamp has a Jan. 26, 1872, manuscript cancel that does not obscure Washington’s face and “four tiny sealed staple holes above the portrait.” A total of 446 $200 red, blue and black documentary revenue stamps were issued, according to Kelleher.

Five lots of collections and accumulations close out the auction. The first of these is a massive U.S. 1846-1988 collection “filled with many items with certificates, many of which have been graded, along with many ungraded well-centered and fresh singles,” according to Kelleher.

Kelleher has prepared a single catalog for the three-day Crimson collection sale. The catalog is available for viewing on the firm’s website, with online bidding options available.