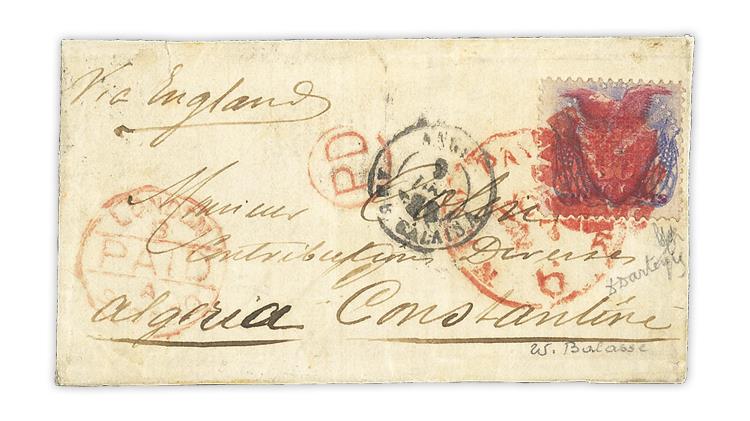 This cover franked with a single United States 30¢ Eagle, Shield and Flags stamp from the 1869 Pictorial issue was mailed in late November 1870 from New York City to Constantine, Algeria. It is one of many choice pieces of postal history in Cherrystone Philatelic Auctioneers’ May 3-4 sale of rare U.S. and worldwide stamps and covers. 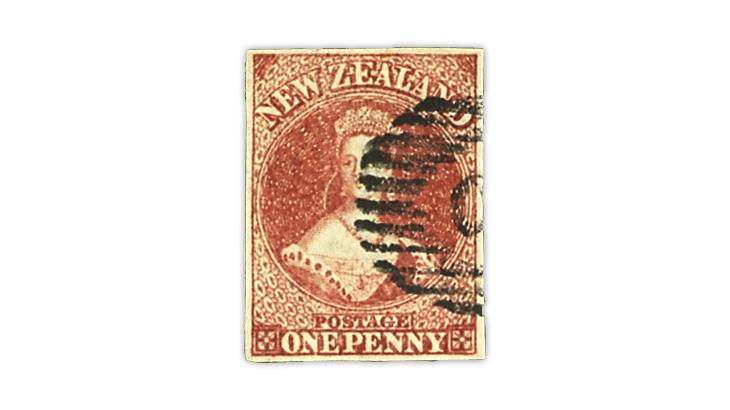 This New Zealand 1855 1-penny dull carmine Queen Victoria stamp printed on white paper with large star watermark is among the scarcer British Commonwealth stamps in the Cherrystone auction. The Royal Philatelic Society London declared the stamp genuine on an expertizing certificate issued in 1934.
Previous
Next

Cherrystone Philatelic Auctioneers will offer more than 1,300 lots of attractive 19th- and 20th-century United States stamps and select stamps and postal history from around the world during a sale to be conducted May 3-4 at the firm’s gallery in Teaneck, N.J.

The two-day auction will be spread over four sessions, with sessions each day at 10 a.m. and 1 p.m. Eastern Time.

Up for bids will be an extensive selection of United States and possessions, rarities of the 19th and 20th centuries, graded stamps, proofs, essays and various back-of-the-book material.

Other highlights will include “specialized Austria, Egypt, France, as well as Germany with a selection of WWII Occupation Issues and mail from POW [prisoner of war] Camps,” according to Cherrystone.

One of the four U.S. 1869 Pictorial items in the sale is a 30¢ Eagle, Shield and Flag stamp (Scott 121) on a partial folded letter mailed in 1870 to Constantine, Algeria. According to Cherrystone, the cover has an intact front (as shown here) and part of the back.

Various postal markings show that the cover was mailed Nov. 27, 1870, from New York City. It then transited through London on Dec. 20 and two cities in France, Calais (Dec. 20 entry postmark on front) and Marseille (transit postmark on back), before arriving in Constantine. Only a small part of the arrival postmark is visible on the back of the cover, Cherrystone said.

Manuscript signatures of three expertizers are visible on the front of the cover at bottom right. Cherrystone specifically mentions the signature of Willy Balasse (written as “W. Balasse”), a dealer and Belgium specialist.

Peter Holcombe, on an accompanying May 2, 1996, expertizing certificate, states that the cover is “a rare usage to an unusual destination.” Also included with the cover is a June 6, 1996, certificate from German expert James van der Linden that references the Holcombe certificate.

The cover’s rarity is reflected in the Scott Specialized Catalogue of United States Stamps and Covers, which values Scott 121 on cover to a foreign destination at $35,000. The value is italicized to indicate an item that can be difficult to value accurately because of limited market data.

A partial strike of a barred oval cancel obscures the left side of the queen’s face in the central portrait. On a more positive note, the stamp possesses full even margins that are well clear of the design on all four sides.

Among the myriad of large lots and collections to be served up at the end of the sale is a comprehensive collection of 1862-1937 Hong Kong issues.

Cherrystone describes this collection as having unused and used singles and sets mounted on pages. Strength is seen in the early Queen Victoria issues, and there are high values from the 1903-11 King Edward VII and 1912-37 King George V series.

Overall the collection is in mixed condition with “occasional minor flaws noted” and “a few certificates included,” according to Cherrystone.

Cherrystone is offering this Hong Kong collection with an opening bid of $7,000.

The catalog for the May 3-4 U.S. and worldwide sale can be viewed and is available for download on the Cherrystone website, with online bidding options available.