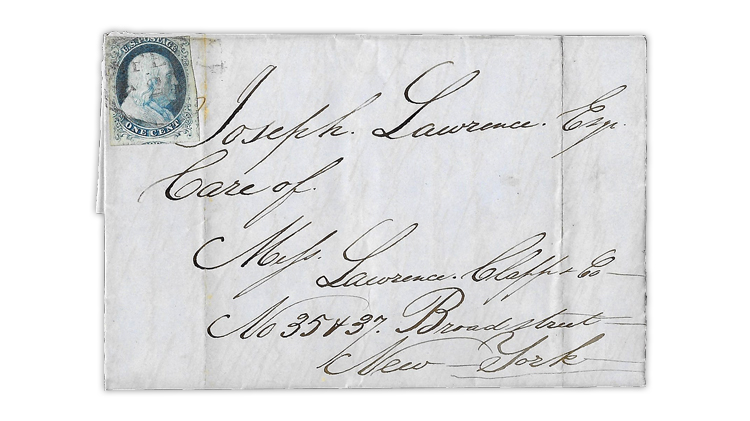 This 1852 folded letter from an estate find is franked with a newly reported example of the rare United States imperforate 1851 1¢ blue Benjamin Franklin type I stamp. Dutch Country Auctions will offer the cover during its March 13-14 sale in Wilmington,

According to Dutch Country, the February 1852 folded letter is from an estate find. It was mailed locally in New York City at the drop letter rate, which required only 1¢ postage.

“We do not know how long the previous owner had this cover as he was not aware what he had,” Kristin Sundin of Dutch Country told Linn’s Stamp News.

“He purchased early covers and postcards at estate and farm auctions. When he sold his material to us, he felt that the best part of his collection was his postcards,” Sundin said.

Only 1851 1¢ Franklin type I stamps (Scott 5) show the complete design as it was intended to be printed, with the top and side ornaments visible, along with the ornate bottom scrolls and plumes.

The rarity of the 1851 1¢ Franklin type I stamp comes from the fact that it is found in just one of the 1,000 positions that exist from the five plates used to print the stamp.

Collectors refer to this position as 7R1E, which is shorthand for the seventh position from the top row of the right pane of 100 printed from plate 1 in its early state.

In 2001 Jerome S. Wagshal published a detailed census of Scott 5, titled The Wagshal Census of 7R1E. That census is maintained and available on the Robert A. Siegel Auction Galleries website.

According to the Siegel census, there are 23 documented covers franked with an example of the 1851 1¢ Franklin type I stamp. The cover in the Dutch Country sale is new to the census.

A Professional Stamp Experts certificate issued Dec. 13, 2019, that accompanies the cover lists no faults and describes it as “a genuine usage.”

Two vertical file folds are present, with the left fold being clear of the stamp, which is affixed to the top left corner of the cover.

Dutch Country lists the cover at the 2020 Scott Specialized Catalogue of United States Stamps and Covers value of $110,000. This value is in italics, to indicate an item that is difficult to value because of limited market data.

United States stamps and postal history are the focus of the two sessions on Friday, March 13. Other notable areas include errors, freaks and oddities; Confederate States and U.S. possessions; United Nations; and U.S. collections and large lots.

Stamps of the world, from Abu Dhabi to Zululand, will be up for bids during the two sessions on Saturday, March 14. The auction concludes with regional and topical collections, and worldwide collections and large lots.

The lots in the upcoming auction can be viewed on the Dutch Country website and at Stamp Auction Network, where online bidding is available.