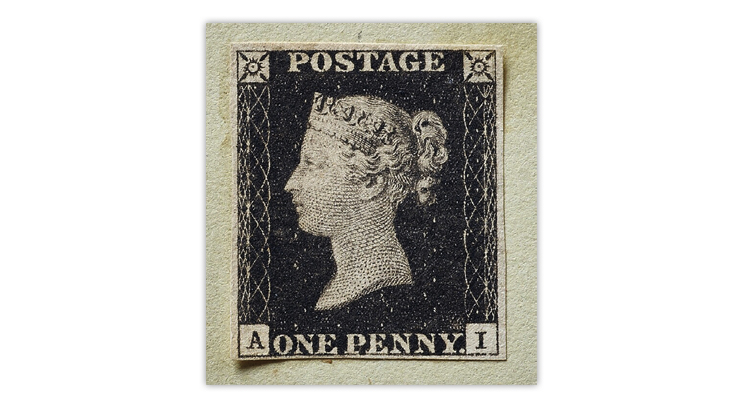 The earliest verifiably dated example of Great Britain’s 1840 Penny Black did not sell when it came up for bids during Sotheby’s Dec. 7 Treasures auction in London. The stamp is affixed to a document dated April 10, 1840, that once resided in an album ass

“Rediscovered nearly three decades ago but not fully recognised until much more recently, the stamp’s identification began when British businessman and philatelist Alan Holyoake came into the possession of The Wallace Document, to which the stamp is attached, almost ten years ago,” Sotheby’s said in an Oct. 26 press release.

Sotheby’s offered the Wallace document with an estimate of £4 million to £6 million, approximately $5.3 million to $7.9 million in early December.

The Penny Black affixed to the famed document, which is dated April 10, 1840, is shown here.

According to Sotheby’s auction house, the Wallace document was once part of Robert Wallace’s album, which was dispersed years ago. Wallace (1773-1855) was a Scottish politician and a member of Parliament who vigorously advocated for postal reform.

In a lengthy description of the history of postal reform and the Wallace document on its website, Sotheby’s championed the Penny Black and the importance of the document:

“Like all great objects, the World’s First Postage Stamp has a great origin story, one that began long before Robert Wallace, Member of Parliament and a leading postal reformer, was presented with the stamp and stuck it onto a sheet of card stock in his personal scrap-album together with a proof of an 1840 Mulready postal stationery form similarly given to him. The resulting dated and self-authenticating display of the two complementary inventions became known as ‘The Wallace Document,’ which today (following its exhibition at the Smithsonian) is regarded as one of the most important documents in philately.”

According to Sotheby’s, Wallace wrote the following notes on the document named for him:

“Universal Penny Postage Fly or Loose Stamp, presented to me Mr. Wallace as above.”

The first Mulready envelopes went on sale May 1, 1840, five days before the May 6 first day of issue for the Penny Black. Unfortunately the Mulreadys were not well received by the public and were quickly eclipsed by the now-famous 1d black stamp picturing a left-facing profile of a young Queen Victoria.

“I’m afraid that the Wallace Document did not find a buyer during today’s auction,” Sotheby’s spokesman Matthew Floris told Linn’s.

“There was pre-sale interest in the lot, further to the item being exhibited in Hong Kong, New York and London, but this did not translate into today’s sale,” Floris said.