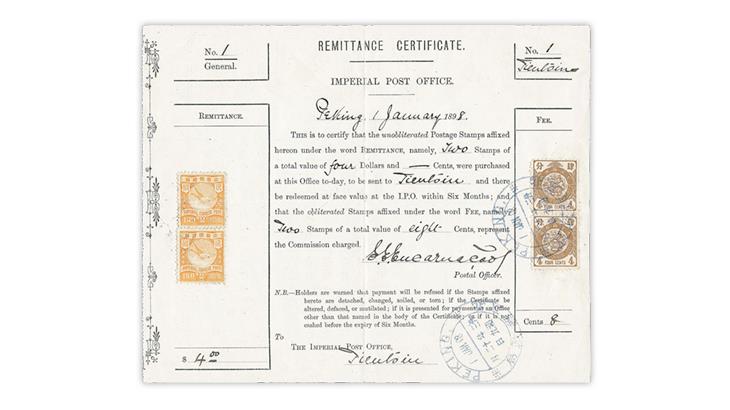 The Dec. 14 Siegel sale of worldwide stamps and postal history includes the Jan. 1, 1898, first day of use of this Imperial Chinese remittance certificate. 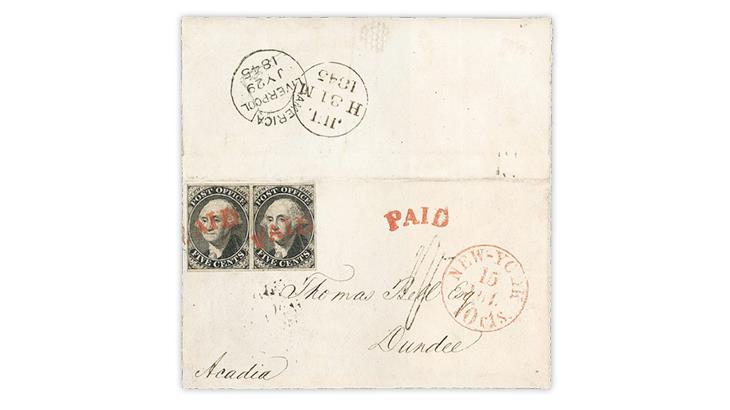 Mailed to Dundee, Scotland, on July 15, 1845, this folded cover is franked with a horizontal pair of the New York City postmaster's provisional. This earliest documented use is offered in the Dec. 15-18 Siegel sale of United States and Hawaii.
Previous
Next

With a strong focus on classic postal history, the two consecutive upcoming auctions from Robert A. Siegel Auction Galleries also present collectors with a diverse selection of stamps and other philatelic finds from all over the globe.

Most lots are offered without reserves, according to Siegel.

The worldwide sale of 345 lots features Great Britain and the British Commonwealth, France and French colonies, plus much more, including large lots and collections.

A rare find among the lots from China is an Imperial Post Office remittance certificate with two unused singles (formerly a vertical pair) of the 1897 $2 orange and yellow Imperial Chinese Post Wild Goose stamp affixed (Scott 96).

The 8¢ commission fee is paid by a pair of the 1897 4¢ Imperial Chinese Post Dragon stamps (Scott 89) tied by the dated blue Peking dollar chop cancel.

Siegel further noted that the “No. 1” at top left and right on the document indicate this was the first remittance used at either Peking or Tientsin.

“Remarkably, there are no other examples known used in Peking during the entire five year period of these certificates,” Siegel added.

The earliest documented date of use for the New York City 5¢ black George Washington postmaster's provisional stamp is July 15, 1845.

Siegel will auction a folded cover franked with a pair of the stamps without signature (Scott 9X1e) and mailed on that date to Dundee, Scotland.

Of the 14 examples known used on that date, the cover being auctioned is the only one bearing more than one stamp. It also carries an estimate of $20,000 to $30,000.

The auction also includes more than 100 lots of Hawaii, beginning with stampless covers and other documents and including three used examples of the coveted Hawaii Missionary stamps: the 5¢ blue (Scott 2), the 13¢ blue type II (3), and the 13¢ blue “H.I. & U.S. Postage” type II (4).

The catalogs for both auctions can be viewed online or downloaded as PDF documents from the Siegel website.