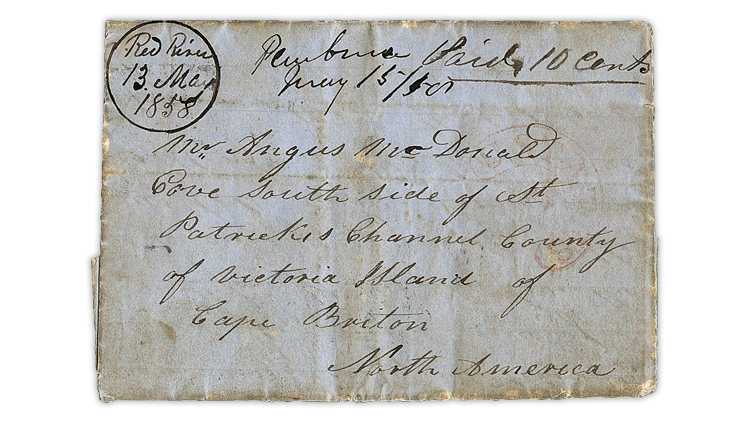 The only known example of the small Red River manuscript postmark can be seen at upper left on this 1858 folded letter from the Red River Settlement. It is among the many early British North America covers offered in the March 24 Robert A. Siegel auction

On March 24, Robert A. Siegel International will offer the Dubois collection of important prestamp covers and postal markings of British North America 1694-1861.

In the auction catalog introduction, Shreve wrote, “The covers essentially form a historical textbook of the French and British periods from the 1690s through 1860s, reflecting the events and circumstances that shaped the country we now know as Canada.”

The earliest material in this sale stretches back more than three centuries, beginning with folded letters from New France.

Among these is a rare British interim period folded letter from Quebec to Edinburgh, Scotland, mailed in 1762, before the development of an organized postal service in Canada.

One of the coveted markings found on this material is the only known example in private hands of the so-called “fhip” (ship) handstamp of Quebec, which is the earliest Canadian ship letter marking.

The cover of the Siegel catalog illustrates one of the great rarities of British North America postal markings, the only recorded example of the small Red River manuscript postmark. The early postmarks from the settlement (in present-day Manitoba) are rare to begin with, yet there are five in the Dubois sale, and the unique small marking (approximately 22 millimeters across rather than the larger 30mm) is on an 1858 blue folded letter addressed to Patrick’s Channel County of Victoria Island of Cape Briton (Nova Scotia).

The Dubois collection sale can be viewed online, with online bidding options available.