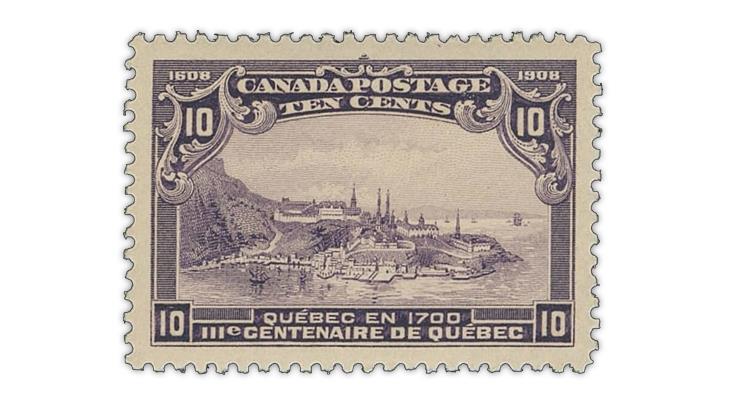 This mint, never-hinged Canada 1908 10¢ dark violet Quebec Tercentenary stamp with exceptionally large margins will be up for bids during Eastern Auctions’ March 24-25 sale of part 1 of the AFAB collection of Newfoundland and Canada. 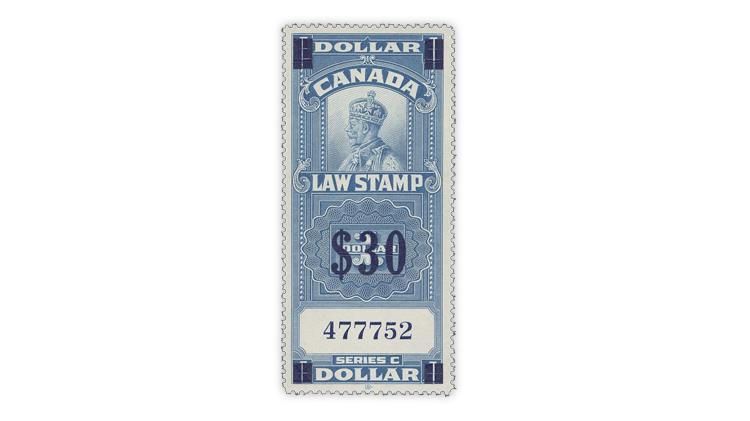 Part 1 of the AFAB collection of Newfoundland and Canada will cross the auction block March 24-25, and the Auchenbraith collection of Canadian federal and provincial revenues will be up for bids March 26.

“Many years in the making with attentive guidance from well-established dealers and auctioneers, the collection offers a mesmerizing display of rare stamps, varieties, essays and countless die proofs from the very rare 1857 Pence Issue to an unparalleled representation of progressive and trial colour proofs from the 1910s to 1930.”

The vignette (central image) of the stamp illustrates a view of Quebec in 1700.

A mint, never-hinged example of this stamp in the grade of very fine is valued at $500 in the 2022 Scott Classic Specialized Catalogue of Stamps and Covers 1840-1940.

The stamp’s exceptional centering and overall condition suggest that it could sell for an amount noticeably higher than the Scott Classic Specialized catalog value.

Eastern lists this stamp with a catalog value of C$900 (approximately US$709 in early March).

The Auchenbraith collection of Canadian federal and provincial revenues is remarkable for its breadth and depth. According to the catalog introduction, highlights include “IN PRIZE” Supreme Court stamps and documents, and “Manitoba & Cape Breton law stamps are among the areas that surpass, on many levels, well known collections of the past such as Ed Richardson, Fred Jarrett, Harry Lussey, Philip Little, etc.”

Eastern said that the owner “focused on acquiring rarities relating to Law stamps, from essays & proofs to elusive provisionals, very few of which have surfaced at auction at any given time.”

One of the numerous law stamps up for bids is a mint, never-hinged Canada 1964 Supreme Court $30-on-$1 milky blue federal law stamp that features a left profile of King George V.

The stamp bears serial No. 477752 and is surcharged in royal blue. Eastern draws attention to the stamp’s “radiant fresh colour, precise centering and pristine original gum.”

Eastern lists this attractive Supreme Court federal law stamp with a catalog value of C$625 (US$492).

Separate catalogs have been prepared for the sales of the AFAB and Auchenbraith collections. Both are available for viewing and download on the Eastern Auctions website, with online bidding options available.