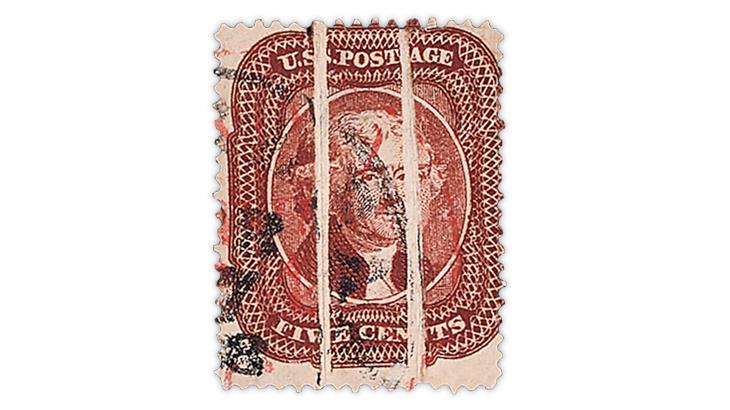 This 1860 5¢ brown type II Thomas Jefferson with two vertical preprinting paper folds is among the United States errors, freaks and oddities in Daniel F. Kelleher Auctions’ Feb. 23-24 sale of part 4 of the William S. Langs stock. The location of the folds 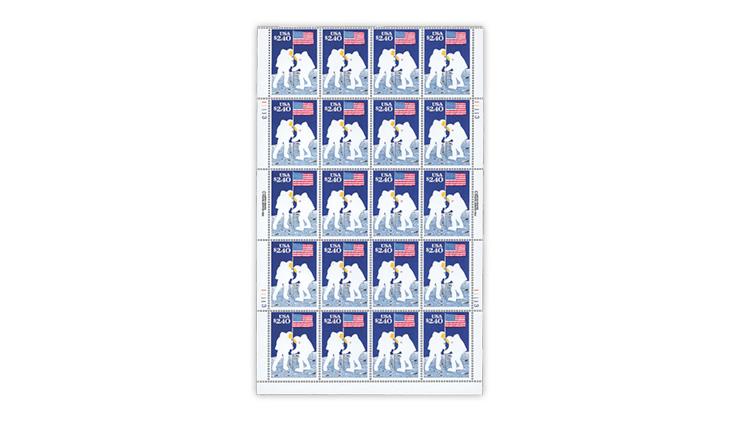 One of the more dramatic color-omitted errors in Kelleher’s Langs sale is a complete pane of the 1989 $2.40 Moon Landing stamp with the intaglio black omitted. The color-omitted error makes the two astronauts in the design appear as ghostlike images.
Previous
Next

Daniel F. Kelleher Auctions’ Feb. 23-24 sale of part 4 of the William S. Langs stock will offer an extensive selection of more than 1,300 lots of United States errors, freaks and oddities.

Errors and other philatelic printing mistakes were a specialty of Langs, a well-known dealer on the stamp show circuit who passed away July 7, 2020.

Both sessions will be held at 10 a.m. Eastern Time at Kelleher’s headquarters in Danbury, Conn.

A selection of 19th-century items will open the first day of the auction. Most of these are stamps with preprinting paper folds, which collectors classify as production freaks.

When the folds are opened out, blank areas are visible on the printed stamp. The more extensive the fold, the more dramatic the appearance of the stamp.

Such is the case for an 1860 5¢ brown type II Thomas Jefferson stamp (Scott 30A) with two vertical preprinting paper folds in the Kelleher sale. The blank areas created by the folds make it look like the nation’s third president is behind bars in a prison.

The stamp has black and red town postmarks and minor faults, according to Kelleher. A 1988 expertizing certificate from the Philatelic Foundation accompanies the stamp.

A fault-free used example of Scott 30A is valued at $300 in the 2021 Scott Specialized Catalogue of United States Stamps and Covers. Kelleher is offering this eye-catching 5¢ Jefferson freak stamp with an estimate of $750 to $1,000.

One of the featured errors in the Feb. 23 session is a bottom margin and arrow plate number block of 10 of the 1931 2¢ Yorktown stamp imperforate vertically (Scott 703c).

According to Kelleher, just a single error pane of 50 has been reported, adding that out of the 50 possible stamps, 30 are in large blocks of 10 “making this one of the most elusive classic U.S. errors” and the only bottom plate block reported.

Kelleher describes this error as being in fine to very fine condition and states that with the exceptions of the top left stamp and the top right margin, the block is never hinged. A purple Weill backstamp is visible in the bottom selvage.

The Philatelic Foundation expertized this block in 2006.

Against a Scott U.S. Specialized catalog value of $35,000, Kelleher estimates this error block at $20,000 to $30,000. The Scott value is italicized to denote an item that is difficult to value because of limited market data.

The Feb. 24 session includes modern EFOs from 1986 through 2018 and various back-of-the-book issues.

One of the more dramatic errors is a complete mint never-hinged pane of 20 of the 1989 $2.40 Moon Landing Priority Mail stamp with the engraved black omitted (Scott 2419a).

Kelleher describes it as “one of the most stunning space errors.” The two astronauts planting a U.S. flag on the surface of the moon appear as white ghostlike images. The only colors visible on their space suits are the lithographed yellow of their helmet visors and the lithographed red and blue in the shoulder patch on the right astronaut’s left arm.

Just 60 to 80 examples of this error are reported, according to the Scott Catalogue of Errors on U.S. Postage Stamps. Kelleher notes that the pane offered in the sale may be the only such intact multiple of the error still in existence.

The Scott Catalogue of Errors on U.S. Postage Stamps includes an important cautionary footnote with its listing for No. 2419a: “No black engraved cross hatching should be visible on the white area of the space suits.”

Kelleher has prepared a single catalog for the two-day Langs sale that is available for viewing on the firm’s website, with online bidding options available.