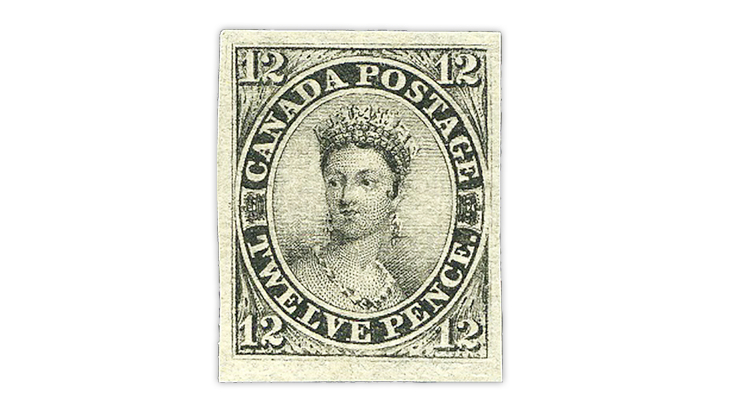 The upcoming David Feldman rarities of the world auction for the benefit of Doctors Without Borders will include the Black Empress, the mint example of Canada’s 1851 12-penny black stamp.

The next auction from David Feldman International Auctioneers will take place in Switzerland Nov. 30 to Dec. 4, with several different catalogs representing a wide range of material on offer.

A separate Rarities of the World catalog contains 133 lots with some of the proceeds benefiting the charitable organization Doctors Without Borders (Medecins Sans Frontieres) in its international fight against COVID-19.

Among the rarities on offer is a mint classic Canadian stamp known as the Black Empress: an 1851 12-penny black Queen Victoria stamp on laid paper with never-hinged gum and large margins (Scott 3).

This classic stamp is described by Feldman as a “world class rarity, in an incomparable state of preservation, graced by its overall great freshness, very good impression also confirmed by an outstanding colour.”

The stamp was assigned a grade of Superb 98 by the Philatelic Foundation and is accompanied by the 2010 Foundation certificate, as well as a 1965 Sissons certificate.

The catalogs for all of the upcoming David Feldman auctions can be viewed or downloaded on the website.

Online bidding is available on the website following a registration procedure.