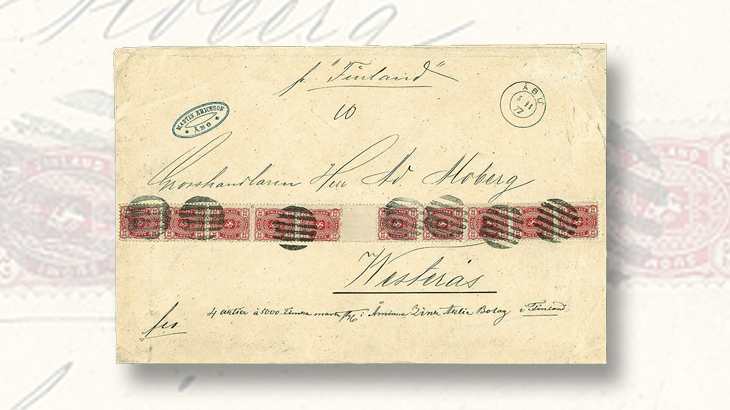 The Finnish “Gutter Cover” is franked with a strip of 10 32-penni stamps, proving the 1875 Helsinki “Senate” printing was done in double sheets of 50. The cover will be offered during the March 18-19 Postiljonen auction.

The franking is created from a strip of 10 that includes a gutter separating five vertical stamps on either end.

The existence of this strip is cited as proof that the 32p stamp from the Helsinki “Senate” printing was created in sheets consisting of two panes of 50, or “double sheets,” as described by Postiljonen.

The stamps on the so-called “Gutter Cover” were postmarked with cork cancels in Abo, Finland, before traveling by ship to Westeras, Sweden. Postiljonen notes that the strip of 10 with gutter is unique and the largest used multiple recorded.

The auction firm, based in Malmo, Sweden (just across the Oresund bridge from Copenhagen, Denmark), will hold the auction at its Malmo offices on the ground floor at Oresundshuset, Hans Michelsensgatan 9.

Along with the international auction, Postiljonen is offering the first part of the Indridi Palsson large gold medal collection of Iceland, consisting of more than 200 lots of stamps, covers, proofs, and postal stationery.

The auction catalogs for both of these sales are available online.