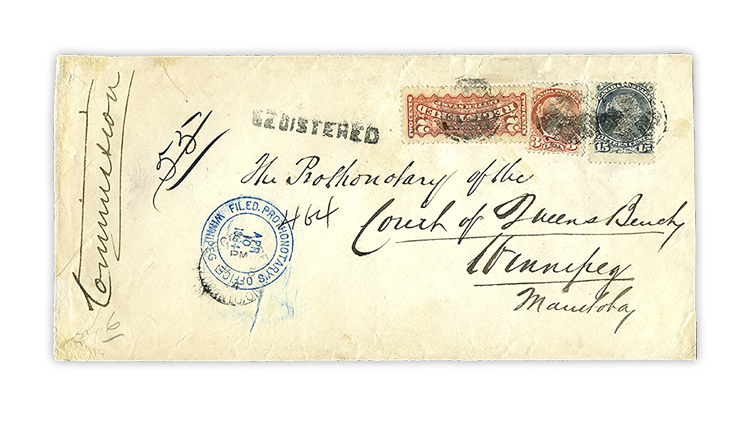 R. Maresch & Son’s June 10 auction of the Fred Fawn collection of the Canada 1868-96 Large Queen issues includes this handsome registered cover sent April 5, 1884, from Toronto, Ontario, to the prothonotary of the Court of Queen’s Bench in Winnipeg, Manit

The sale will be held in conjunction with the Capex 2022 international exhibition June 9-12 at the Metro Toronto Convention Centre North Building, 255 Front St. W., in Toronto, Ontario, Canada.

In the introduction to the catalog for the Fawn collection, Maresch said that Fawn “engaged in extensive research, including on historical design, colour and production innovations, and tracking down the details surrounding intriguing accounts of the uses and travels of particular covers.”

Fawn specialized in and exhibited the Large Queen issues for many years, winning gold awards at numerous shows from 1999 to 2019.

Included in the 278-lot sale are more than 100 covers documenting an impressive array of rates and usages. Also up for bids are numerous essays and proofs, as well as singles, blocks of four and larger multiples of the issued stamps.

One of the more eye-catching items of postal history is a registered cover mailed April 5, 1884, from Toronto to the prothonotary of the Court of Queen’s Bench in Winnipeg, Manitoba.

A bold strike of a blue double-outline circular datestamp on the front indicates that the cover was filed April 10 at the prothonotary office.

The franking consists of an 1868 15¢ gray Large Queen (Scott 30), an 1873 3¢ orange red Small Queen (37) and an 1875 2¢ orange registration stamp (F1). A straight-line “REGISTERED” handstamp was applied just to the left of the registration stamp, which is affixed to the cover upside-down.

Accompanying the cover is a Vincent Graves Greene Philatelic Research Foundation certificate issued Nov. 23, 2020, that states the cover is “genuine in all respects.”

Maresch has prepared a single 65-page catalog for the Fred Fawn collection that can be viewed and downloaded from the Maresch website. Online bidding will be conducted through Stamp Auction Network.