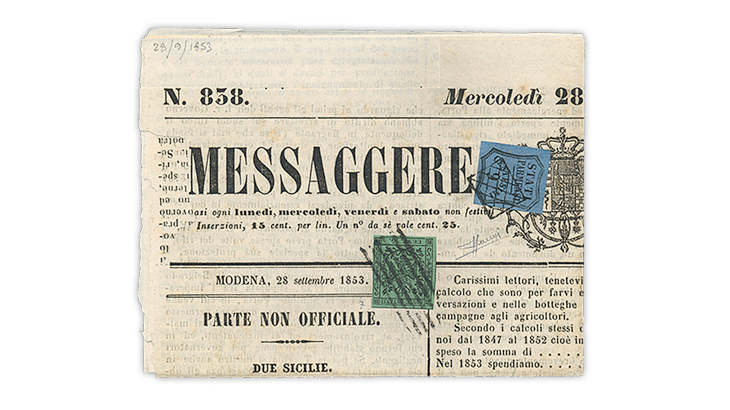 The upcoming Christoph Gaertner auction includes an 1852 issue of the Messaggere di Modena newspaper franked with the Modena 1852 5-centesimo black on green stamp with period after the denomination. Upon arrival in Parma, the newspaper was taxed 9c with t

The Christoph Gaertner auction firm in Germany has prepared an auction of worldwide material that will take place Dec. 2.

“From attractive single lots to collections, there is something for everyone,” Gaertner said. Consignors for this sale will accept underbids of up to 50 percent, Gaertner stated, while also cautioning that competing bids can be expected.

The firm pointed out that the sale will offer nearly 5,000 lots, “especially in the price range 50 euros to 200 euros,” which are awaiting new owners.

The auction’s individual lots include material from Asia, Europe, Germany and worldwide, along with topicals and thematics and airmail. Collections are similarly sorted, and a substantial number of picture postcards are also on offer.

The European lots include an issue of the newspaper Messaggere di Modena from September 1853 with a two-stamp mixed franking. The newspaper was mailed with the 1852 5-centesimo black on green Coat of Arms stamp with period after the denomination (Modena Scott 6).

According to Gaertner, upon arrival the newspaper was taxed with the 1853 Parma 9c black on blue newspaper tax stamp (Parma Scott PR2).

Both stamps are individually tied to the newspaper with different black cancels. The lot is offered with a starting bid of €4,500 (roughly $5,320 about four weeks before the auction).

In the Scott Classic Specialized Catalogue of Stamps and Covers 1840-1940, the Parma stamp tied on newspaper is valued at $10,000, with that figure in italics because it is difficult to value accurately.

Another 9c Parma stamp on newspaper is also offered in this sale.

The auction can be found on the Gaertner website, with online bidding options available. The sale is also listed on Stamp Auction Network.