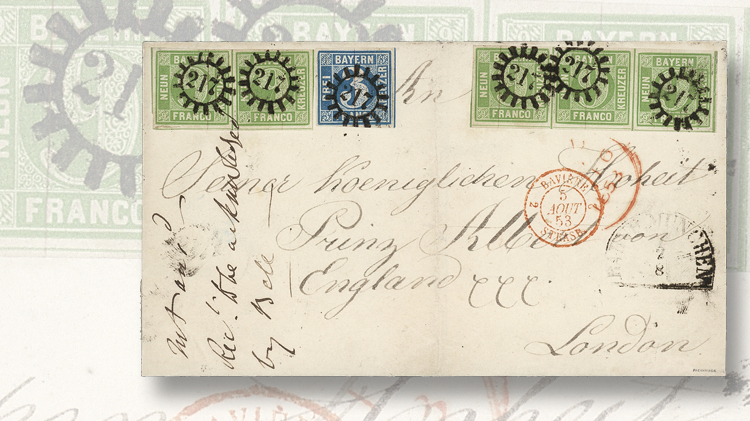 As usual, early German postal history was well represented in Gaertner’s sale. This splendid cover, addressed to Prince Albert, Queen Victoria’s husband, was knocked down to a new owner for $34,400. 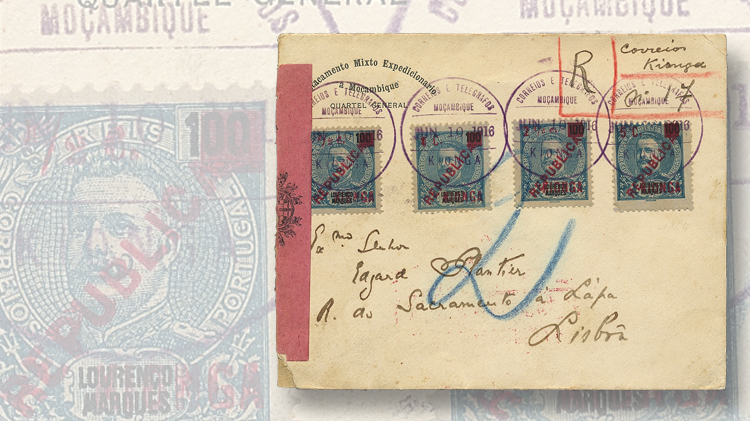 Christoph Gaertner offered this philatelic cover franked with the entire stamp output from the African province of Kionga — four stamps. Sent from Kionga to Lisbon, Portugal, in 1916, the scarce cover sold for $13,150 in the June 20-23 auction. 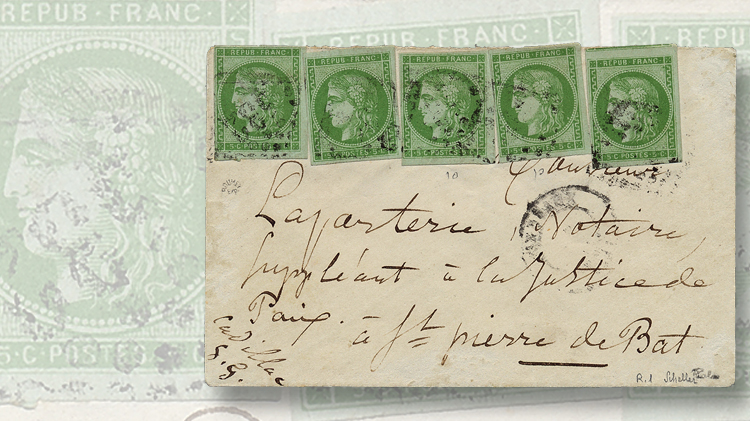 This French cover from around 1870 is franked with five examples of the extremely scarce type A of the 5-centime stamp provisionally issued in Bordeaux. Featuring the signature of French expert Roumet, the cover sold for $78,500 during the June Gaertner s 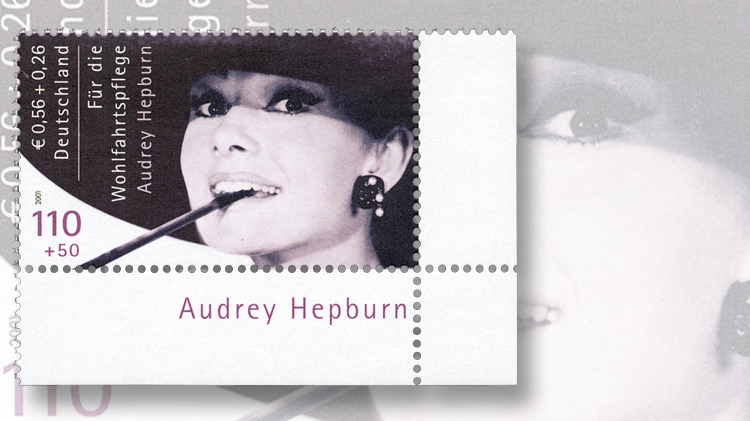 Just 40 (four panes of 10) of Germany’s unissued 2001 Audrey Hepburn semipostal stamp are known to have escaped destruction. This example, featuring the actress’s name in the selvage, realized $176,000 during the June 20-23 Christoph Gaertner sale in Stut 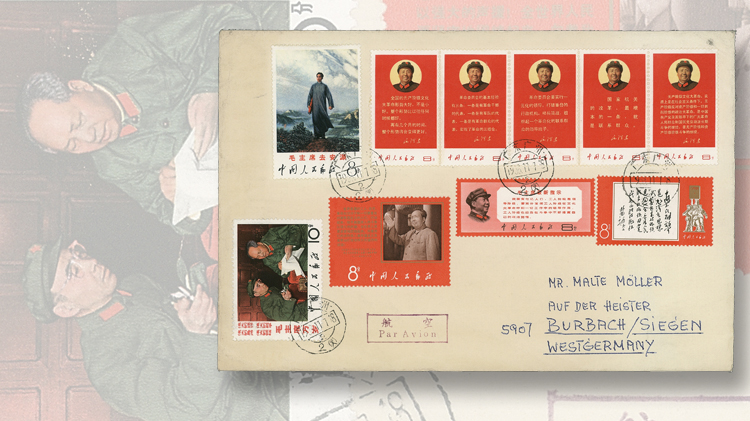 Another highlight of the June Gartner auction, which found a new home for a bit more than $10,000, was this 1968 cover from the People’s Republic of China to West Germany, sent at the height of the Cultural Revolution, franked with a mix of Chinese stamps
Previous
Next

“Look at them, Madame,” he said in his heavy French accent. “Have you ever in your entire life seen anything so beautiful?”

“I’m sorry,” she replied. “I don’t know anything about stamps.”

This exchange between a fictional Parisian stamp dealer and Audrey Hepburn’s character in the 1963 movie Charade seems deeply ironic in retrospect: Hepburn herself would later come to grace one of the world’s most beautiful and valuable stamps.

One of those glamorous rarities hit the red carpet in June, looking for a new home.

The stamp featuring Hepburn was to have been part of a 2001 German semipostal set featuring international film stars (Scott B890-B894).

Hepburn (1929-1993), the Oscar-winning star of Roman Holiday, Breakfast at Tiffany’s, My Fair Lady, and many other films, came to exemplify 20th-century chic with her distinctive style and carefree innocence.

Later in life, she devoted herself to working with UNICEF to protect children in some of the world’s poorest communities.

Reams of 110-pfennig+50pf stamps, showing Hepburn smiling under a broad-brimmed hat and seductively gripping a long cigarette holder in her mouth, were prepared by Deutsche Post.

But at the last minute, the German postal authorities realized they needed the permission of Hepburn’s son, Sean Ferrer, to use the image they had selected for the stamp.

Ferrer declined, citing alterations to the photograph — supposedly it had originally showed his mother with a pair of sunglasses in her mouth — and the entire print run was destroyed, except for four panes of 10.

One pane had apparently gotten out to the public, because four or five examples are known postally used. Two other panes were retained by the German post office, while the pane sent to Ferrer remained in his possession.

Amid worldwide media attention, Ferrer’s sheet was auctioned in 2010 for about $600,000, with proceeds benefitting the Audrey Hepburn Children’s Fund.

That sheet has since been broken up, and a bottom-right corner margin single from it, with Hepburn’s name in the selvage, was offered in Christoph Gaertner’s sale of worldwide stamps and postal history June 20-23 at their headquarters near Stuttgart, Germany.

The only single on the market with the actress’ name in the margin, it was described as “postfrisch” — post office fresh — and faultless.

Eager bidding in the packed auction room resulted in a final price, including the 22 percent buyer’s premium that Gaertner adds to all lots, of slightly more than €150,000, or $176,000.

As Hepburn’s character, Reggie Lampert, said when the Parisian dealer informed her of her rare stamps’ value: “May I sit down?”

As usual, early German postal history was well represented in Gaertner’s sale, including many items from the various states that united to form modern Germany around 1870.

Albert, Queen Victoria’s husband, was born in Saxony, and retained his German noble title, Duke of Saxe-Coburg and Gotha, even as he became prince consort.

Besides the royal addressee, the cover’s high franking of 48kr for its trip via France and the presence of a plate flaw on one of the 9kr stamps made it even more desirable. It was knocked down for $34,400.

It is not often that an entire country fits neatly on a single cover, but a registered letter from the southern African province of Kionga offered an example of just that in the Gaertner sale.

This small territory sandwiched between Tanganyika and Mozambique belonged to Germany from 1894 until the middle of World War I, when Portugal took it over. Four provisional postage stamps were created by overprinting 100-reis King Carlos regular stamps from the nearby colony of Lourenco Marques with name “Kionga” and new denominations: ½-centavo, 1c, 2½c, and 5c (Scott 1-4).

That would be the entire stamp output of this country. Shortly afterward, it was annexed to Mozambique.

The foursome, on a philatelic cover to Lisbon, were all postmarked with purple June 10, 1916, datestamps.

An Aug. 5 receiving datestamp is on the reverse. Red censor tape down the left side attests to the wartime necessity of controlling all mail, even to nominally neutral countries.

A scarce example of mail from this tiny and short-lived territory, the cover sold for $13,150.

A 1968 cover from the People’s Republic of China to West Germany, sent at the height of the Cultural Revolution, bore a mix of Chinese stamps featuring Chairman Mao Zedong and his sayings (Scott 956, 991, 996a, 997-999).

Postmarked in Canton (Guangdong), the cover is a scarce example of philatelic mail to the West during this period, and many of the stamps it bears are highly sought after.

For example, just the strip of five stamps showing Mao’s statements about the Cultural Revolution (996) is valued at $2,250 off cover in the Scott Standard Postage Stamp Catalogue. The cover in the Gaertner sale, which opened around $2,350, was run up to a little more than $10,000.

A French cover from around 1870 was franked with five examples of the extremely scarce type A of the 5-centime stamp provisionally issued in Bordeaux (Scott 41c) during the Franco-Prussian war.

Also known as report 1 in French philatelic parlance, type A is distinguished by the subtlest of differences. Among the most readily discernible, the pupil of Ceres’s eye barely misses the lower eyelid in type A, whereas in type B the two are joined.

The 5c type A is considered the scarcest stamp of the Bordeaux issue, which was hastily prepared by lithography during the turmoil of war.

It is rarely seen on cover even as a single stamp, much less as a quintet. The cover sold by Gaertner, signed by the French expert Roumet, brought $78,500.