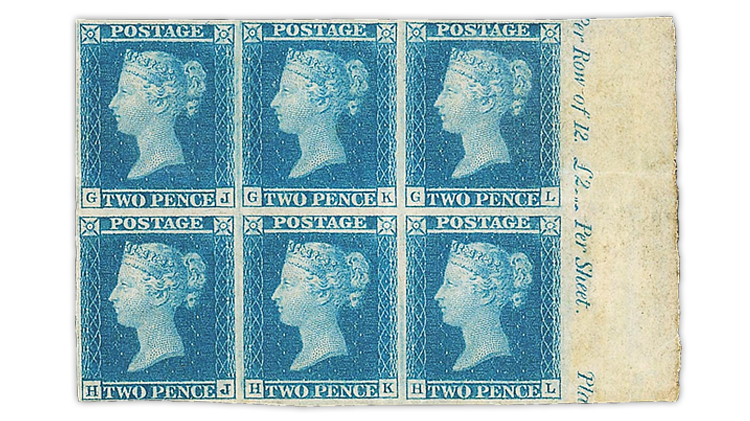 The May 13 Spink sale of classic Great Britain stamps and postal history in London includes this attractive right margin block of six of the 1841 Two- Penny Blue. 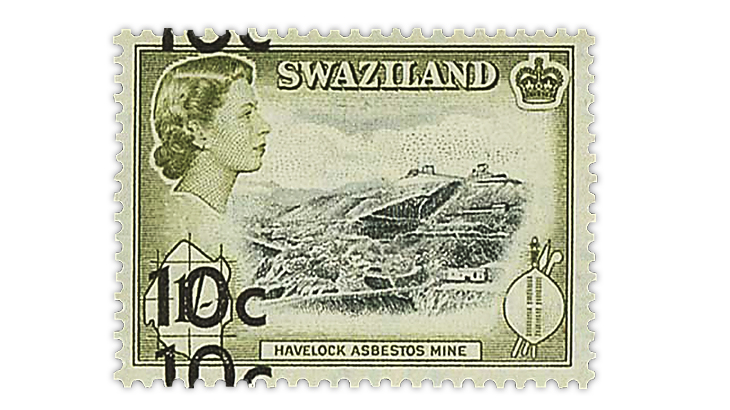 The Libra collection of the 1961 decimal surcharge issues of Basutoland, Bechuanaland and Swaziland will also cross the Spink auction block May 13. This mint never-hinged example of the Swaziland 1961 10¢ on 1-shilling gray olive and black Queen Elizabeth
Previous
Next

On May 13 in London, Spink will conduct two separate auctions of classic Great Britain material and a detailed collection of Queen Elizabeth II decimal surcharges.

First to cross the Spink auction block will be 400 lots of Great Britain stamps and postal history. In the afternoon, bidders will compete for items from the specialized Libra collection of the 1961 decimal surcharges of Basutoland, Bechuanaland and Swaziland.

Great Britain’s earliest stamps — the 1840 Penny Black and the 1840-41 Two-Penny Blue — are well represented in the first sale, with singles and multiples being offered to suit a broad range of budgets.

Among the more impressive multiples is an unused right margin block of six of the 1841 Two-Penny Blue printed in what Spink describes as a pale shade of blue.

The six stamps have check letters GJ through HL in the bottom corners; these letters identify the stamps’ original positions in the printed sheet.

Spink describes the block as having two hinge remnants and a significant part of its original gum.

“Margin blocks from this issue are few and far between,” according to Spink. A 1995 British Philatelic Association expertizing certificate accompanies the block, which Spink lists with a minimum opening bid of £20,000, approximately $24,550 in late April.

The 79 lots in the Libra collection are distributed among the three African nations as follows: Basutoland, 32 lots; Bechuanaland, 25 lots; and Swaziland, 22 lots. Emphasis is on single stamps and multiples, with a scattering of covers and collection balances.

Highlights include shifted surcharges and surcharge errors. From the latter category is a mint never-hinged example of the Swaziland 1961 10¢ on 1-shilling gray olive and black Queen Elizabeth II stamp with a double surcharge in the lower left corner.

This double surcharge error is valued at $1,600 in the Scott Standard Postage Stamp Catalogue. Spink lists the example from the Libra collection with a minimum bid of £1,200 ($1,475).

The catalogs for both sales can be viewed on the Spink website. Click on “auctions,” then “by department” and then on “stamps” to locate the catalogs.