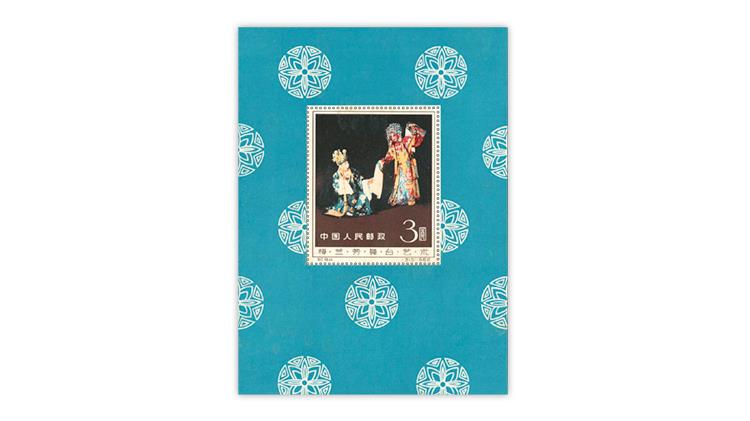 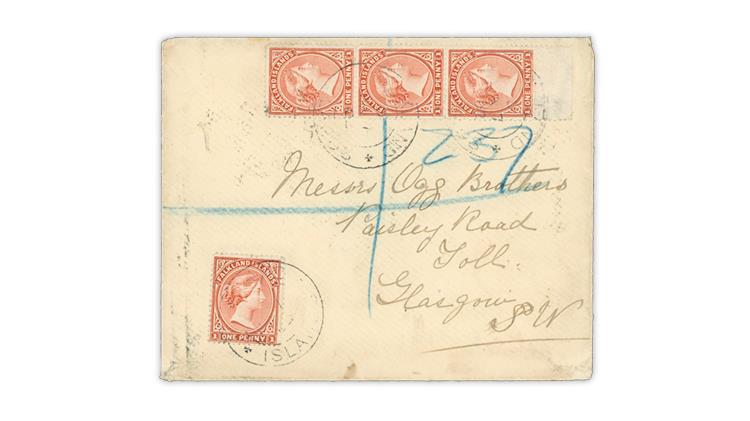 This cover sent via registered mail in 1902 from the Falkland Islands to Glasgow, Scotland, will cross the Grosvenor auction block during the firm’s March 17 sale in London.
Previous
Next

Grosvenor Philatelic Auctions will offer an extensive array of British Empire and worldwide stamps and postal history during a March 17 sale at the firm’s gallery in London.

Included among the 1,005 lots up for bids in the single-day auction are “rare watermark varieties from the Falkland Islands and other countries, including the exceptional collection formed by the late Bryant Rose, and a fine offering of British Europe including Cyprus, Gibraltar and Malta,” according to Grosvenor.

Leading off the sale are 55 lots of miscellaneous and mixed lots and postal history and covers. Collectors of King George VI issues will be pleased to see an extensive used collection that will cross the Grosvenor auction block.

Among the highlights of this collection are numerous sets from various countries in blocks of four. Also included are a handful of interesting plate flaw varieties, including a Jamaica 1938 1-shilling dark brown and bright green Sugar Industry stamp (Scott 125) with the “repaired chimney” flaw.

Included in the offerings of the People’s Republic of China is a mint, never-hinged 1962 $3 Stage Art of Mei Lan-fang souvenir sheet (Scott 628). Grosvenor describes this sheet as “having some gum wrinkles and patches of toning” and an “otherwise fresh appearance.”

A mint souvenir sheet without faults is valued at $18,500 in the 2021 Scott Standard Postage Stamp Catalogue. The value is in italics to indicate that the sheet appears infrequently in the philatelic marketplace and is thus difficult to value.

In a footnote accompanying the listing, Scott states that “No. 628 contains one 48x58mm stamp and almost always has some faults.” Scott values a $3 Stage Art of Mei Lan-fang souvenir sheet with small faults at $10,000.

Numerous covers mailed from the Falkland Islands will be up for bids. Some of these feature colorful frankings and are within the reach of collectors with modest budgets.

A representative example is a registered cover mailed Jan. 7, 1902, from the Falkland Islands to Glasgow, Scotland. The 4 pence postage is paid with a vertical strip of three and a single of the 1899 1d Queen Victoria (Scott 11B).

A cross and “237” in blue crayon indicate that the cover was sent via registered mail. Backstamps (not shown) indicate the cover transited through London on Feb. 4 and arrived in Glasgow the same day. In its description Grosvenor notes that the cover was carried aboard the Iberia and once resided in the Cottis collection.

The auction catalog for the sale is available for viewing and download on the Grosvenor website. For more information write to Grosvenor Philatelic Auctions, 399-401 Strand, London WC2R 0LT, England.