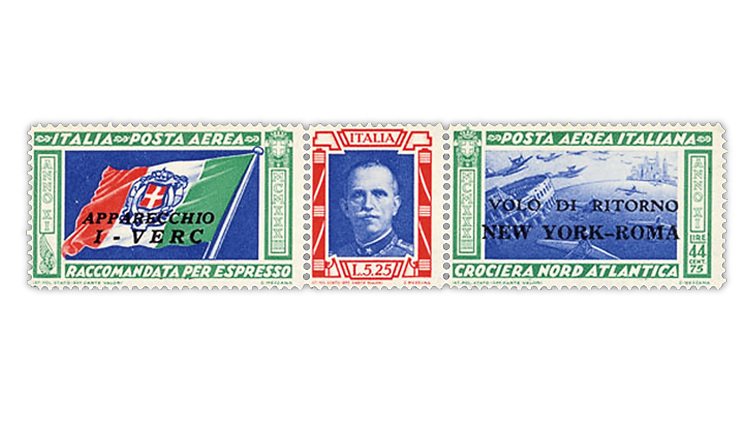 A never-hinged example of a scarce unissued variety of Italy’s 1933 Balbo airmail issue will be offered during the Aug. 1-4 Harmer-Schau auction at the American Philatelic Society’s Stampshow in Omaha, Neb. 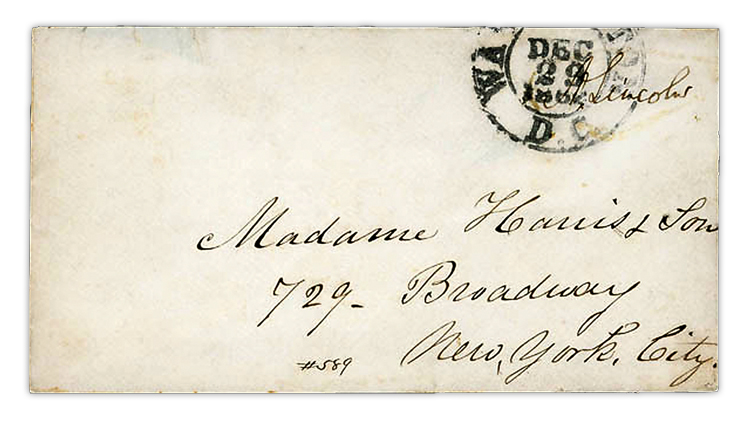 The upcoming Harmer-Schau public auction features numerous free-frank covers of the 19th century, including this example from Abraham Lincoln.
Previous
Next

Harmer-Schau Auction Galleries of Petaluma, Calif., is once again the designated auctioneer for the American Philatelic Society’s annual Stampshow.

The firm will present a public auction of worldwide and United States material in four sessions, Aug. 1-4, at the show venue, the CHI Health Convention Center in Omaha, Neb.

The opening session on Thursday consists of individual worldwide lots, including British Commonwealth.

An unusual variety of a popular Italian airmail issue is one standout in the sale.

The never-hinged 1933 triptych is from the stamp set commemorating the Rome-to-Chicago flight of the 24-seaplane squadron led by Gen. Italo Balbo during the Century of Progress Exposition. It is a variety of Italy Scott C49, overprinted but never issued for the squadron’s return flight.

Harmer-Schau reports only 500 examples of the unissued triptych were overprinted.

The 2019 Scott Classic Specialized Catalogue of Stamps and Covers 1840-1940 describes the variety in an editorial note following the listings for the airmail issues Italy Scott C48 and C49, and provides a Scott catalog value of $54,000 for the never-hinged trio.

The example in the upcoming auction is accompanied by a 2019 Philatelic Foundation certificate and is listed with an opening bid of $14,500.

An 1862 cover signed “A. Lincoln” while the 16th president was in office is struck on the signature with a double-ring Washington, D.C., handstamp.

The backflap of the cover has been repaired and has a small piece still missing at right but shows a very fine appearance, according to Harmer-Schau. Bidding opens at $3,000, and the cover is estimated at $4,000 to $4,500.

Campaign covers, Confederate postal history and more are included among the collection offerings.

The individual stamp and postal history lots in the second session include unused and used singles and multiples, as well as selected essays and proofs.

Among these is an unused arrow block of 48 of the 1869 1¢ buff Benjamin Franklin (Scott 112). The block is identified by Linn’s U.S. Stamp Facts 19th Century as the largest known multiple of the stamp, which was issued in panes of 150.

Approximately 21 stamps in the block are hinged, according to Harmer-Schau, and the upper right stamp shows a sealed tear. Calculating a Scott value of approximately $66,000, the auction firm opens bidding on the block at $10,000 and suggests an estimate of $15,000 to $20,000.

Numerous large lots, accumulations and collections are offered during the final two sessions of this sale.

The individual lots can be viewed at the Harmer-Schau website, with online bidding available. For more information about the sale, contact Harmer-Schau Auction Galleries Inc., 1333 N. McDowell Blvd., Suite B, Petaluma, CA 94954.