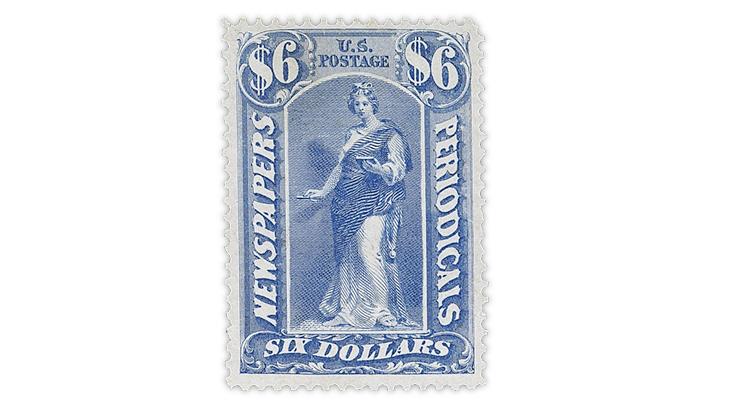 On March 1, Robert A. Siegel Auction Galleries will offer the impressive Hope collection of United States newspapers and periodicals issues. One of the rarities up for bids is an 1875 Continental Bank Note Co. special printing of the $6 ultramarine Clio s 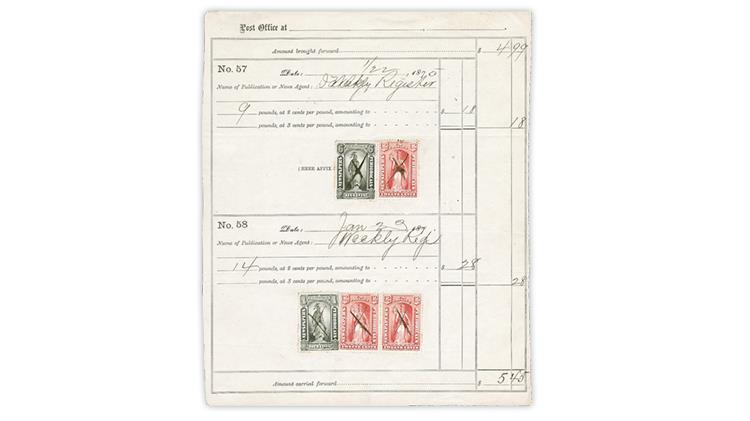 This Post Office Department ledger page showing two receipts dated Jan. 1, 1875, and Jan. 23, 1875, for the payment of postage on 9-pound and 14-pound shipments of newspapers is up for bids during Siegel’s March 1 auction of the Hope collection. The top r 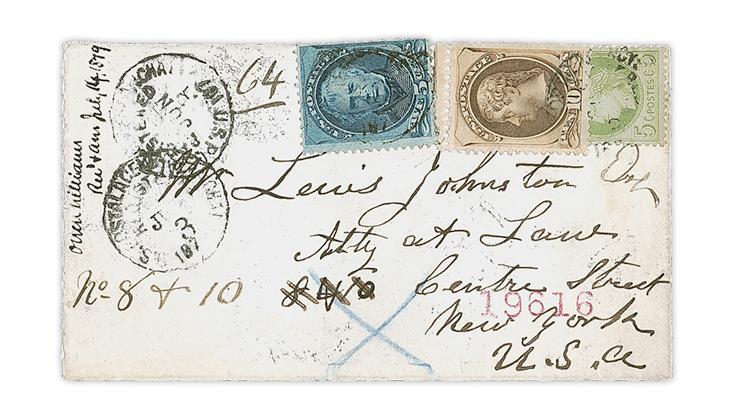 Included in Siegel’s sale of part 2 of the Magnolia collection of U.S. mail in China and Japan is an 1879 registered cover sent from the U.S. Postal Agency in Shanghai, China, to New York City with a mixed franking of U.S. and French stamps. According to 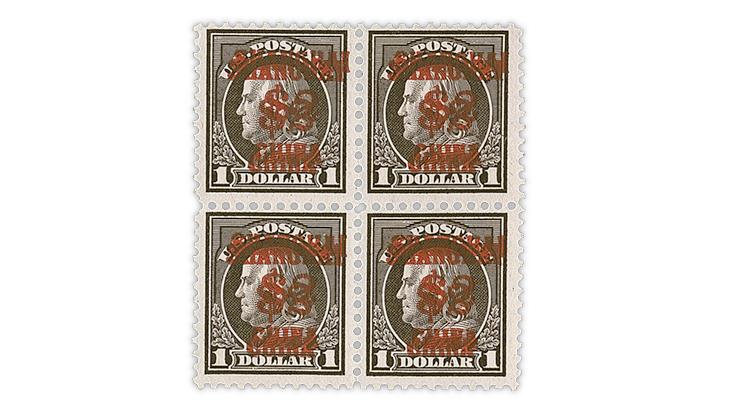 One of the more spectacular Offices in China items in the Siegel auction of part 2 of the Magnolia collection is an unused block of four of the $2-on-$1 violet brown Franklin with a double surcharge. A block of four of this error is valued at $45,000 in t
Previous
Next

Robert A. Siegel Auction Galleries will offer a pair of significant name collections during a sale to be held March 1 at its headquarters in New York City.

Beginning at 10:30 a.m. Eastern Time, Siegel will present the Hope collection of United States newspapers and periodicals issues, more commonly referred to as newspaper stamps. The afternoon session, set to commence at 1:30 p.m., will feature part 2 of the Magnolia collection of U.S. mail in China and Japan.

In the introduction to the catalog for the Hope collection, Siegel president Scott Trepel provides a succinct review of the genesis and purpose of newspaper stamps before underlining the importance of a collection that was methodically assembled one stamp at a time.

“Apart from its completeness, the extraordinary feature of the Hope collection is the uniformly superb quality of the stamps.”

Trepel stressed the quality of the collection because fault-free, well-centered newspaper stamps are, as he puts it, “extremely rare.”

Newspaper and periodical stamps were first issued in September 1865 for the prepayment of postage on bulk shipments of newspapers and periodicals. From 1875 on, the stamps were affixed (and canceled at times) in receipt books that were retained by the post office. Their use was discontinued on July 1, 1898.

Among the rarest newspaper stamps are the 1875 special printings of the Continental Bank Note Co. The stamps (Scott PR33-PR56) were printed on hard white paper and issued without gum.

Just 14 examples of the $6 ultramarine Clio newspaper stamp (Scott PR50) were sold, and one of them resides in the Hope collection.

Siegel describes the stamp as the finest of the seven that are recorded in the firm’s census of Scott PR50 and notes that the Philatelic Foundation expertized it in 2003 and 2018.

Siegel lists this $6 Clio newspaper stamp at the Scott Specialized Catalogue of United States Stamps and Covers value of $80,000. In Siegel’s 2003 Rarities of the World sale, the stamp sold for $82,500.

There are also many stamps in the Hope collection to suit more modest budgets.

One of the more affordable items is a Post Office Department ledger page showing two receipts dated Jan. 22, 1875, and Jan. 23, 1875, for the payment of postage on 9-pound and 14-pound shipments, respectively, of the Weekly Register newspaper.

In its description of the ledger page, Siegel aptly observed that “unlike with regular postage issues, rarely do we see evidence of how these beautiful stamps were actually used.”

Siegel is offering this fascinating piece of newspaper and periodical postal history with an estimate of $500 to $750.

Following the conclusion of the sale of the Hope collection, Siegel will offer part 2 of the Magnolia collection of U.S. Mail in China and Japan. Part 1, which Siegel sold Dec. 16, 2021, included some of the finest and most consequential covers in the collection.

All 263 lots in the second part are directly related to the U.S. Postal Agency in Shanghai, China, according to the introduction to the sale catalog.

“The first section is exclusively registered mail from 1876 to 1920 (lots 201-275), arranged by the markings used, including handstamps, registry labels and the U.S. and China stamp issues,” Siegel said.

Leading off the sale is an impressive array of 14 covers featuring early types of Shanghai registered mail markings.

One of the more unusual of these is a registered letter sent June 3, 1879, from the U.S. Postal Agency in Shanghai to New York City. At left are two strikes of the U.S. agency’s registered circular datestamp. Two strikes of this marking also tie the three-stamp franking to the cover.

A French 5-centime yellow green Ceres stamp (Scott 53) was affixed to the cover first, followed by a U.S. 10¢ brown Thomas Jefferson (161) and a 5¢ blue Zachary Taylor (179). The mixed franking makes the cover “the only recorded registered cover from Shanghai with a combination of United States and French stamps,” Siegel said.

According to Siegel, the letter was carried aboard the Pacific Mail Steam Ship Alaska to San Francisco, where it arrived July 5, as indicated by a magenta four-line datestamp on the back (not shown). A purple handstamp on the back shows the cover arrived in New York on July 14.

If the cover was ultimately delivered to New York, why was U.S. postage applied after the French stamp was affixed?

Siegel provided a straightforward explanation: “The French 5-centimes stamp was probably affixed in anticipation of using the French post office in Shanghai, but the sender ended up using the U.S. Postal Agency, thus rendering the French stamp superfluous.”

Therefore, the 5¢ Taylor paid the required postage, and the 10¢ registration fee was satisfied by the 10¢ Jefferson.

Siegel is offering this attractive mixed franking registered cover from Shanghai to New York with an estimate of $7,500 to $10,000.

Washington-Franklin stamps of the 1917-19 series were surcharged at double the original face value of the stamps for use from the U.S. Postal Agency in Shanghai. These Offices in China stamps were valid for prepayment of postage on mail sent from the postal agency to U.S. addresses.

One of the more spectacular Offices in China items from the Magnolia collection is an unused (lightly hinged) block of four of the $2-on-$1 violet brown Franklin with a double surcharge (Scott K16a).

Siegel draws attention to the block’s “deep rich colors” and describes it as one of the “few extant blocks” of this notable error.

The $2-on-$1 double surcharge error was one of the last Offices in China issues to be placed on sale before the Dec. 31, 1922, closure of the U.S. Postal Agency, according to Siegel.

“The Deputy Postal Agent, E. H. Murray, knew of the error but allowed it to be put on sale, as he was retiring and the Agency was closing,” Siegel said.

Siegel lists this Offices in China $2-on-$1 block of four with double surcharge at the Scott U.S. Specialized catalog value of $45,000.

Separate softcover catalogs have been prepared for the sales of the Hope collection and the second part of the Magnolia collection. Full details of the auction, including downloadable versions of the catalogs and online bidding options, are available on the Siegel website.