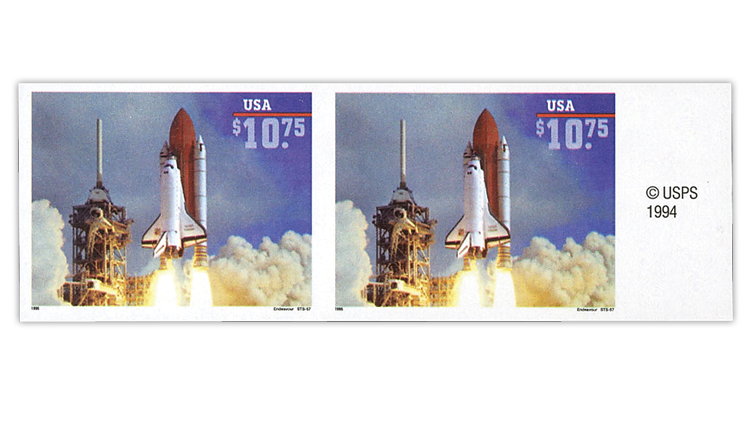 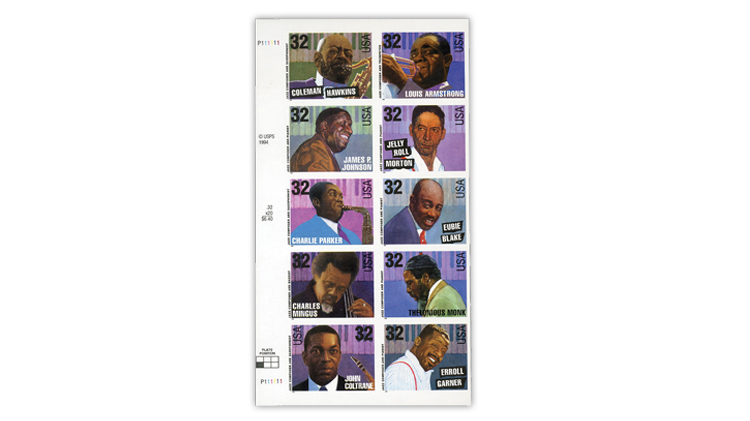 Previously unreported imperforate varieties from the American Music series in the upcoming Cherrystone auction include this block of 10 from the 1995 32¢ Jazz Musicians set, and a full pane of the 1996 32¢ Big Band Leaders set. 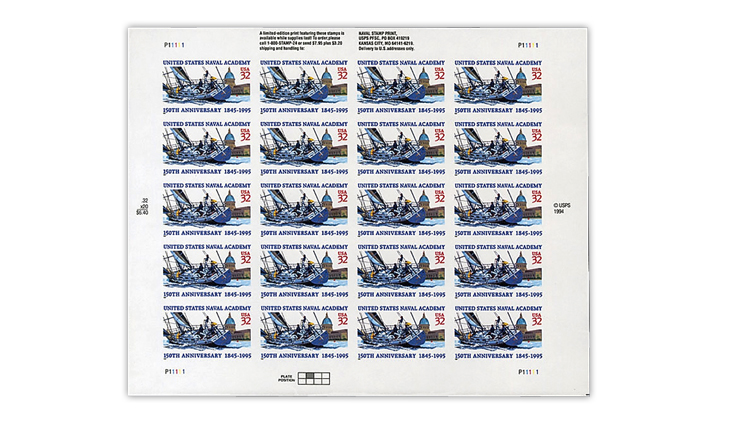 The 1995 32¢ U.S. Naval Academy stamp is offered as an imperforate pane in the Cherrystone auction. No error varieties of this issue have been reported or are listed to date in the Scott catalog. 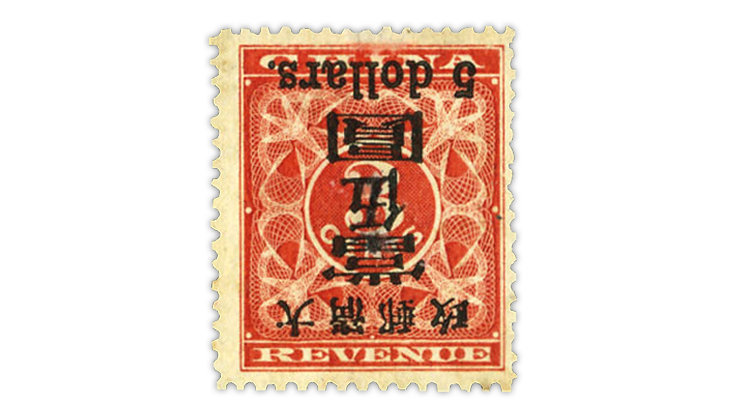 This invert of the $5 surcharge on the 1897 Red Revenue issue from China is offered in the Cherrystone sale.
Previous
Next

Alongside the many classic United States and worldwide stamps and covers included in the Jan. 14-15 Cherrystone auction in New York City are a substantial number of modern U.S. imperforate varieties from the end of the 20th century.

Several of these varieties have not been reported previously and therefore to date are not listed as errors in the Scott Specialized Catalogue of United States Stamps and Covers, despite the fact that most of these finds are of stamps issued almost 25 years ago.

The margin at right, adjacent to the stamp pair, shows the inscription “©USPS/1994.”

There are no varieties listed in the Scott catalog for the $10.75 stamp, which was issued in panes of 20 in 1995 to fulfill an increase in the Express Mail rate. The stamp pair in the Cherrystone auction is accompanied by a 2019 certificate from the Philatelic Foundation and is listed with an opening price of $450.

Among other previously unreported discoveries in the sale are three different configurations in a single lot of the 1995 32¢ Florida Statehood stamp (Scott 2950): an imperforate margin single, a horizontal pair and a corner margin vertical pair with plate numbers. The 32¢ Florida Statehood stamp was issued in a pane of 20. The grouping is offered in this sale with an opening bid of $220.

Two different unreported imperforate varieties from the American Music series are offered as separate lots in the Cherrystone auction.

An imperf block of 10 of the 32¢ Jazz Musicians set (Scott 2983-2992) includes the margin at left with two plate numbers (top and bottom), plus additional inscriptions including copyright information and a pane position diagram.

The stamps were issued in 1995 with 10 different designs in a pane of 20 with a decorative banner at top. The imperf block in this auction includes one stamp of each design.

The Scott catalog has listed only an imperforate pair of two stamps from this pane, consisting of the 32¢ John Coltrane stamp and the 32¢ Erroll Garner stamp (Scott 2992c). That error pair is valued at $5,000 in the 2020 Scott U.S. Specialized catalog, with that figure in italics to signal that the item can be difficult to value accurately.

Cherrystone offers the imperf block of 10 with an opening bid of $2,300.

The second unlisted item from the American Music series is an intact imperforate pane of 20 of the 1996 Big Band Leaders set (Scott 3099). This pane was issued with four different designs and a decorative banner across the top.

The pane is offered with an opening bid of $900.

This is the first report of any variety on the U.S. Naval Academy issue. Cherrystone has listed a $450 opening bid for the pane.

The World of Dinosaurs is a pane of 15 32¢ stamps issued May 1, 1997 (Scott 3136). Two different perforation errors of this issue have been recorded in the Scott catalog: a pane with the bottom seven stamps imperforate (3136p) and a pane with the top eight stamps imperforate (3136q). Both errors are listed in the Scott catalog with a value (in italics) of $2,500.

One example of each of these errors is offered in the Cherrystone auction with opening bids of $750 for each.

A third variety, not listed in the Scott catalog, is also offered in this sale: a full intact pane without perforations.

Cherrystone has assigned an opening bid of $1,200 for the imperforate pane of The World of Dinosaurs stamps.

The catalog for this Cherrystone auction is titled Rare Stamps and Postal History of the World and offers 1,334 lots, including numerous large lots and collections.

The auction begins with classic U.S. stamps and covers, starting with the 1845 New York postmasters’ provisionals, and continuing through to modern issues and back-of-the-book.

Cherrystone cites a catalog value of $8,000 for the set and established an opening bid of $1,800.

A standout item among the worldwide lots is an unused example of China’s 1897 surcharged Red Revenue issue with the surcharge inverted. The gum on this $5-on-3-candareen red stamp (Scott 85a) is not original, according to the auction catalog description, but the stamp despite small flaws is described as a “fine appearing example” from the Wong Man King collection. The value (in italics) for an unused stamp is $130,000 in the 2020 Scott Classic Specialized Catalogue of Stamps and Covers 1840-1940. Cherrystone has listed the stamp with an opening bid of $30,000.

The auction also includes the small 4¢ surcharge on 3c red (Scott 81) and the large $1 surcharge (84) from this famous issue.

Along with issues of the United States and Asia, the auction offers Western Europe, South and Central America, Great Britain and British Commonwealth, Poland, Russia and more.

The catalog for this auction can be viewed on the Cherrystone website, and each session can be downloaded as a PDF document.

Online bidding is available on the Cherrystone site or through Stamp Auction Network.