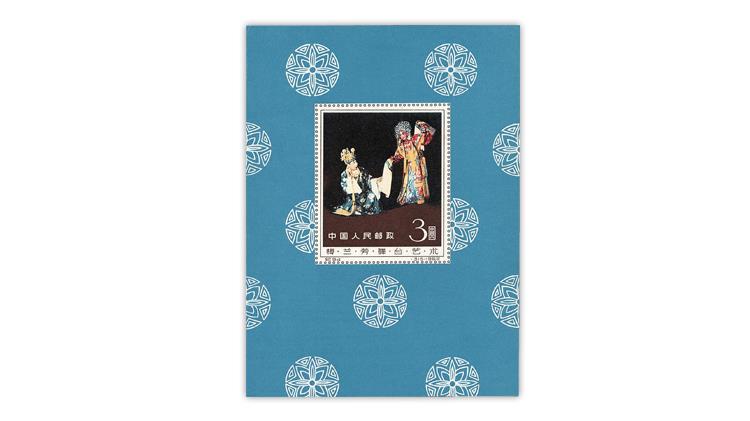 This attractive 1962 $3 Mei Lan-fang souvenir sheet from the People’s Republic of China is featured in Harmer-Schau Auction Galleries’ Jan. 15-17 sale of United States and worldwide stamps and collections. 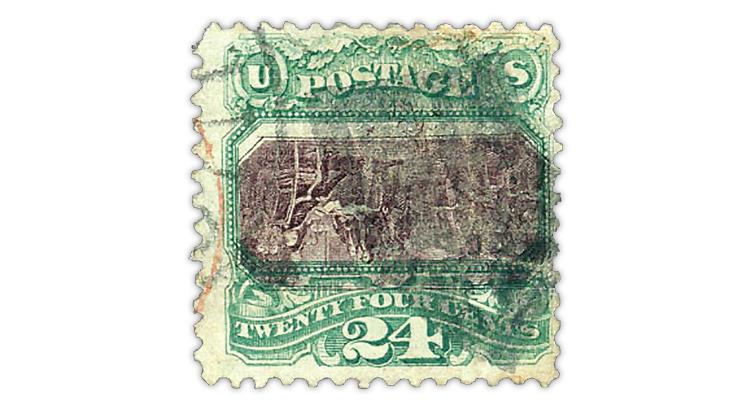 Among the U.S. rarities to cross the auction block during the Harmer-Schau January sale is this used 1869 24¢ Pictorial invert. This stamp also was included in Robert A. Siegel Auction Galleries’ 1965 Rarities of the World sale.
Previous
Next

More than 2,200 lots of United States and worldwide stamps and collections will be up for bids during Harmer-Schau Auction Galleries’ Jan. 15-17 sale at its office in Petaluma, Calif.

United States and possessions, philatelic literature, ephemera and postcards comprise the 722 lots to be sold during the second part of the sale on Jan. 16.

Collection lots, large and small, will be the focus of the final session on Jan. 17. Among the 990 lots will be specialized collections of Australian states, British North America and Canada, China, Hong Kong, India and Indian states, and New Zealand.

In 1962 the People’s Republic of China issued a set of stamps celebrating stage actor Mei Lan-fang (Scott 620-628). The $3 souvenir sheet of one (628) is the key item in the set, and Harmer-Schau is offering one during the Jan. 15 session.

Harmer-Schau describes this mint never-hinged Mei Lan-fang souvenir sheet as having a “bold bright surface” and notes the presence of a few fingerprints on the gum.

In a footnote the Scott Standard Postage Stamp Catalogue states that the Mei Lan-fang sheet “almost always has some faults.” Scott values a mint never-hinged sheet without faults at $18,500; a sheet with small faults is valued at $10,000. According to Harmer-Schau, just 20,000 sheets were issued.

A featured offering in the Jan. 16 session is a used U.S. 1869 24¢ Pictorial with the vignette inverted (Scott 120b). The central image shows John Trumbull’s 1826 painting Declaration of Independence.

This invert has a “small sealed tear at top left” and was included in Robert A. Siegel Auction Galleries’ 1965 Rarities of the World sale, according to Harmer-Schau.

In its census of rare U.S. stamps, Siegel records 90 examples of Scott 120b. Of these, just 15 are described as sound. The example in the Harmer-Schau sale is Siegel census No. 120b-CAN-37.

Against a Scott Specialized Catalogue of United States Stamps and Covers value of $37,500, Harmer-Schau estimates this used 24¢ Pictorial invert at $8,000 to $10,000, with an opening bid of $4,750. The Scott U.S. Specialized catalog says: “Most examples of No. 120b are faulty. Values are for fine centered examples with only minimal faults.”

Harmer-Schau will offer a “valuable worldwide dealer’s stock” during the final session Jan. 17.

Listed with an opening bid of $21,000 and an estimate of $30,000 to $35,000, this extensive holding includes hundreds of U.S. and foreign stamps, with “mainly mint higher priced items with nice fine used whenever present” and is “ready for immediate resale,” according to Harmer-Schau.

A catalog for the three-day sale is available for viewing and download on the Harmer-Schau website, with online bidding options available.