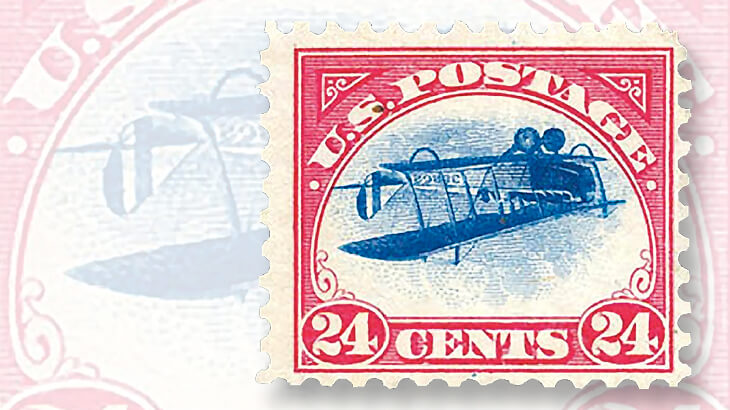 The June 1 Schuyler Rumsey auction of United States and worldwide material at World Stamp Show-NY 2016 at the Javits Center in New York City will include the position 8 Jenny Invert error stamp of 1918. 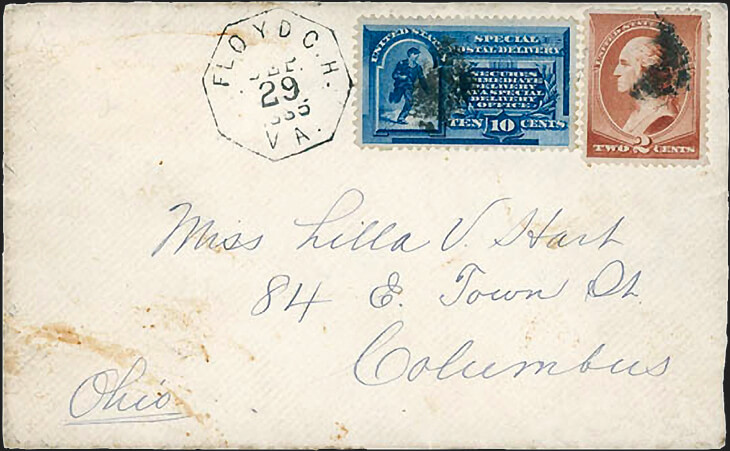 The earliest-known use of the first United States special delivery stamp, the 1885 10¢ blue Messenger Running, will be offered during the June 1 Schuyler Rumsey auction, taking place in New York City at World Stamp Show-NY 2016.
Previous
Next

The Schuyler Rumsey auction taking place June 1 at World Stamp Show-NY 2016 will be presented in two sessions. The auction is taking place at the show venue, in the Javits Center in New York City.

United States and worldwide stamps and postal history are offered in the first session, which begins at 10 a.m.

The second session, at 5 p.m., will present the Robert L. Markovits collection of U.S. special delivery.

Markovits, who died Dec. 20, 2015, was an expert on U.S. back-of-the-book material and began his collection of special delivery issues in 1954. His exhibit of the material won multiple international large gold medals.

The Jenny Invert is one of the most recognizable stamp errors in the world, with its distinctive blue airplane flying upside down in the central vignette instead of right side up as intended. One pane of 100 error stamps was purchased when the stamp went on sale in 1918, and no others were ever discovered.

The example in the Rumsey sale is from position 8 in the top row of the discovery pane, which means it once had a straight edge across the top, but that edge was reperforated many years ago. The stamp has a “tiny natural paper inclusion” and colors described as bright and fresh.

Accompanied by a 2002 Philatelic Foundation certificate, the Jenny Invert is listed by Rumsey with the $350,000 value published in the 2016 Scott Specialized Catalogue of United States Stamps and Covers.

The early session also offers a stamp of which only a single example is known: the 1861 5¢ round Rutherfordton, N.C., Confederate postmaster’s provisional stamp (Scott 72X1).

The stamp being offered is the example pictured in the Scott U.S. Specialized catalog, where it is listed with a $35,000 value. Rumsey explains, however, “The Scott Catalog value of $35,000 is based on a thirty-year-old auction realization and the price in italics attests to similar difficulty of valuation in today’s market.”

The cover, described by Rumsey as one of the great treasures of Confederate philately, is offered with a 2015 Confederate Stamp Alliance certificate.

The sale of the Markovits collection brings to market more than 200 lots of material representing the full range of special delivery issues from 1885 through 1971 (Scott E1-E23).

The auction offers essays and proofs, single stamps and multiples, postal history and more, including overprinted issues of Cuba, Guam, and the Philippines.

The standout items in this collection are many, and include the earliest-known use of the 1885 10¢ blue Messenger Running stamp (Scott E1). The stamp is tied by an octagonal postmark from Floyd Court House, Va., dated Sept. 29, 1885.

The cover was delivered in Columbus, Ohio, on Oct. 1, the first official day of special delivery service, with a clear round black arrival postmark on the back of the envelope.

The cover is one Markovits described and illustrated in his article in the May-June 2001 Collectors Club Philatelist.