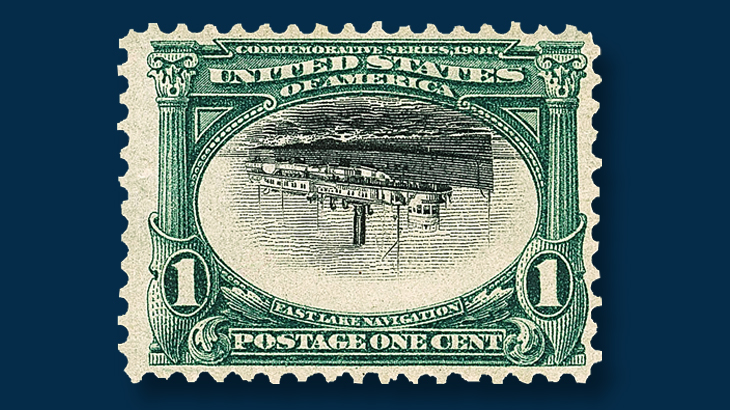 An unused 1¢ invert from the 1901 Pan-American Exposition issue, one of five (plus one used) that will be offered in the Siegel auction. 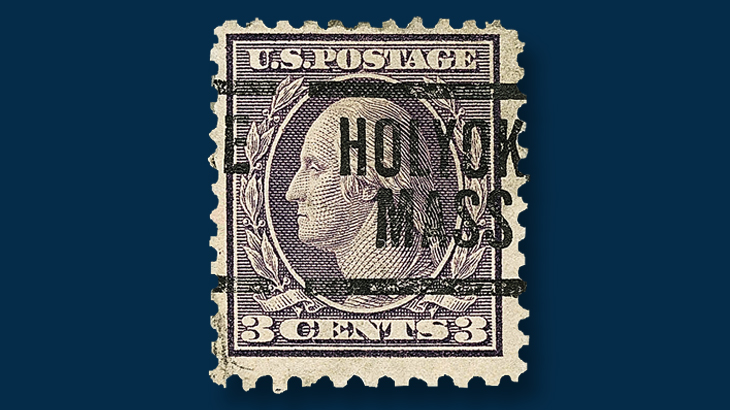 Two examples of the 1918 3¢ dark violet type II George Washington with gauge 10 perforations at bottom are offered in the November Siegel sale. This example is struck with a Holyoke, Mass., precancel. 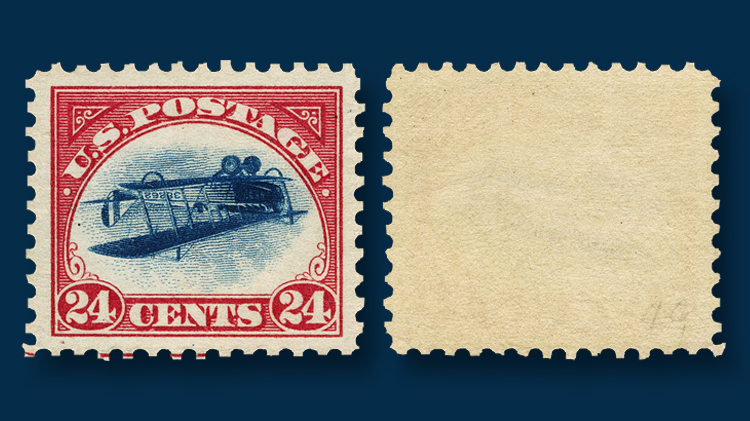 The position 49 Jenny Invert was certified by the Philatelic Foundation earlier this year after being out of the public eye for a century. It will be offered during the Nov. 14-16 Robert A. Siegel auction. 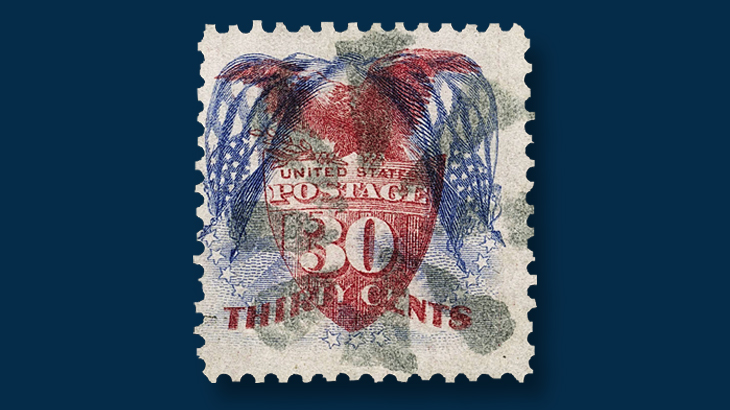 The Nov. 14-16 Robert A. Siegel auction in New York City includes another rare error, a used 1869 30¢ Eagle, Shield and Flags stamp with the blue flags inverted. Just 47 examples of the variety have been accounted for.
Previous
Next

Its whereabouts unknown for a century, the Jenny Invert stamp from position 49 on the discovery sheet of 100 stamps surfaced earlier this year.

News that the long-absent stamp had turned up was reported here.

A Chicago-area family submitted the stamp to the Foundation for certification. While preferring to remain unnamed in publicity, the family did disclose that the stamp spent most of its life in a safe deposit box, untouched by stamp hinges and protected from potential damage, including light and environmental fluctuations.

“Because the stamp was never mounted in an album, it is coveted by collectors as a mint, unhinged copy with its original gum. Only six unhinged Jenny Inverts, including this example, are recorded from the original sheet of 100,” the Foundation reported.

Robert A. Siegel Auction Galleries in New York City will offer the Jenny Invert stamp during its Nov. 14-16 auction.

The Jenny Invert is the top attention-grabber in a sale that offers many U.S. rarities, a number of highly graded singles and multiples, and perforation varieties that are sought after by specialists and other U.S. collectors.

Siegel expressed the opinion that the Jenny Invert in this auction is “the finest example in existence, by virtue of its pristine gum and phenomenal centering.”

This particular stamp is offered to the market for the first time since the error sheet of 100 was broken up following the original discovery. Each stamp was carefully numbered in pencil on the back to note its position on the sheet, and the “49” lightly applied in the lower right corner by stamp dealer Eugene Klein can still be read in the photograph Siegel shows in its auction catalog.

The stamp is mint, never hinged, possessing a “deep rich color unlike any we have ever encountered,” according to Siegel.

The stamp is listed by Siegel with the $850,000 value assigned by the Scott Specialized Catalogue of United States Stamps and Covers for a never-hinged Jenny Invert grading very fine (VF 80).

Keep in mind that the never-hinged stamp being auctioned by Siegel graded XF 90.

Other significant invert errors in this sale include a used example of the 1869 30¢ ultramarine and carmine Eagle, Shield and Flags stamp with the ultramarine flags inverted (Scott 121b).

Compared to the 100 Jenny Invert errors known to exist, there are only 47 known examples of the 1869 30¢ invert, according to the Siegel census of the issue.

Much like the Jenny Invert described previously, this stamp has also been out of sight for quite some time. It was acquired at the 1941 Harmer, Rooke auction of the C.A. Brown collection, according to Siegel, and has been held by the same family ever since.

A 2018 PF certificate also accompanies the used stamp, which is listed with the Scott catalog value of $90,000.

This auction also offers eight lots with inverts from the 1901 Pan-American Exposition stamp set, including five unused and one used of the 1¢ green and black with the black steamship vignette inverted (Scott 294a).

One of those unused 1¢ inverts was “kept in a safe deposit box for more than 70 years (sharing space with the Inverted Jenny Position 49),” according to Siegel.

For good measure, collectors can also bid on two different examples of the $1 tan, brown, orange and yellow Candle Holder error stamp with the engraved brown design elements inverted (Scott 1610c). Just 93 examples are known of the stamp error popularly identified as the CIA invert because the incomplete pane was originally purchased at a post office by office employees of the spy agency.

Among the scarce perforation varieties offered in this sale are two examples of the 1918 3¢ dark violet type II George Washington flat-plate printing with gauge 10 perforations at bottom (Scott 502e). The stamps are otherwise perforated gauge 11, which is the perforation gauge normally found on all sides.

Both stamps in this sale are precanceled — one in Janesville, Wis., and the other in Holyoke, Mass. — as are seven of the nine examples of this variety recorded in the Siegel census, which advises that the variety is not known in unused condition.

The stamps are listed by Siegel with the $30,000 value found in the Scott catalog.

The final two sessions of the auction on Friday offer stamps and postal history of Confederate States and Hawaii, respectively.

The Hawaii material includes what Siegel describes as the finer of the two recorded tete-beche panes of 10 of the 1865 5¢ Interisland Numeral issue (Scott 22a).

The auction will take place at the Siegel galleries in midtown Manhattan. The catalogs are posted at the Siegel website with online bidding options available.